Residents of Scarborough’s West Rouge neighbourhood will be able to catch their first glimpse of the new self-driving shuttle as it learns its route this September.

The little electric bus, known as Olli, will be driven around the community by a human so the machine can learn to drive the route itself, the City of Toronto said in an email update to those following the trial.

“Automated vehicles have the potential to reshape and redefine our transportation network,” the City says on its website.

“This trial is an opportunity for Torontonians to experience first-hand how it feels to ride on an automated vehicle, and to interact with it on public roads.”

Eventually Olli will transport eight passengers at a time to the nearby GO station and back again. On weekends it will travel between the station, Rouge National Urban Park, and West Rouge Community Centre. 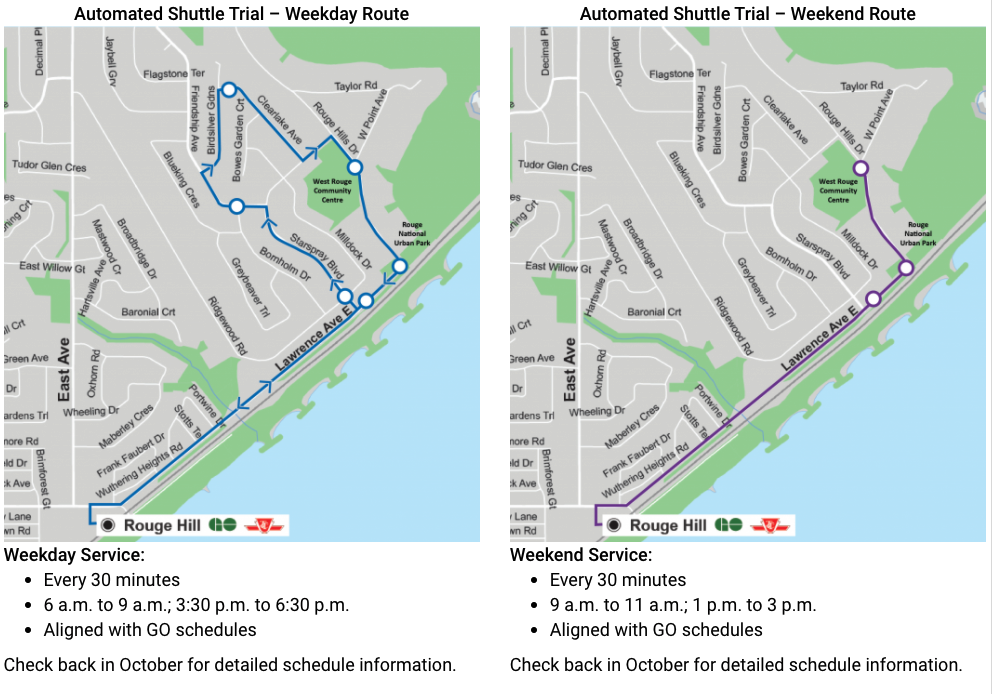 Although the shuttle is primarily operated by computers, there will always be a human attendant on board to take over driving if necessary. Its maximum speed while in automated mode is 20 kilometres per hour.

The automated shuttle is a temporary pilot project to improve accessibility in the neighbourhood, and the City has praised it for being quiet and producing no greenhouse gases.

People who want to learn more about the automated shuttle can attend an online public information session on Tuesday, September 14 from 7 to 8:30 pm. Guests can register by emailing [email protected]

Those interested in booking a ride on Olli must register online for COVID-19 safety.

Whitby is also testing a similar self-driving shuttle that will transport passengers along the town’s waterfront.