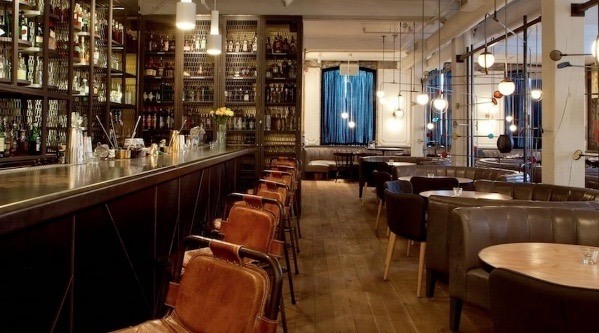 Now that the countdown to TIFF has officially begun, there’s a lot to be excited about.

This year’s festival will include 296 full-length features, 139 world premieres with films from 71 different countries.

And as we prepare for the 41st anniversary of TIFF, we can’t help but get excited about potentially running into a few of our favourite stars.

From restaurants to lounges and movie premiere hot spots, here are 16 spots where you can expect to find the stars hanging during TIFF.

Café Boulud – Four Seasons
The revamped Café Boulud at the Four Seasons Hotel has become a hotspot for A-listers during TIFF and has attracted the likes of Jennifer Anniston, Bruce Springsteen, Denzel Washington,  Al Pacino, Woody Harrelson, and even the Hemsworth brothers.

Buca
Tucked away from Toronto’s bustling King Street West, Buca is a go-to dining spot for both Toronto’s elite and Hollywood’s biggest stars. Here you can dine in the lively dining area or choose to stay tucked away in one of the private back rooms. Over the years, Megan Fox, John Legend, Bill Murray and Sandra Bullock have been spotted dining on chef Rob Gentile’s ­delectable Italian food.

Patria
This tucked away Spanish eatery has become a popular spot for TIFF parties and events and at the 2014 premiere party for St. Vincent, Bill Murray notoriously led a full-fledged conga line with Kristen Wiig and Melissa McCarthy. This restaurant is open to the public, so make a reservation early and maybe you’ll be able to catch a glimpse of one of your favourite stars.

The Drake Hotel
Despite being miles away from the downtown TIFF action, Queen West’s Drake Hotel is always a popular hangout for the stars seeking a more trendy scene. Over the years, the Drake Hotel has thrown a number of TIFF parties that have attracted the likes of Taylor Kitsch, Donald Sutherland, Claire Danes, Adrian Grenier, and Gabriel Macht.

Drake 150
If you’re wanting a more upscale atmosphere that’s closer to the TIFF action, make your way to the Drake 150 on York St. Each year, this trendy restaurant hosts a number of star-studded parties that go well past 2 am.

Byblos
This Pearl Street restaurant has become a TIFF party staple over the years and has hosted a number of cast dinners, premiere parties, and event after parties. If you’re hoping to catch a glimpse of a star, make sure to arrive early and you might be able to spot someone notable hopping out of their sedan or SUV on their way inside. Kate Winslet, Al Pacino,Tom Hardy, Justin Long, Amanda Seyfried, Richard, Gerard Butler, Salma Hayek, and Adrien Brody have partied here over the years.

Shangri-La Lobby Bar
The best place for random A-list run-ins is always at the bar and restaurant inside the Shangri-La lobby. George Clooney, Jessica Chastain, Jake Gyllenhaal, and Johnny Depp have been seen enjoying cocktails here over the years.

Sotto Sotto
This upscale eatery not only boasts the city’s best Italian food and dining atmosphere, it also gives diners the opportunity to rub shoulders with some of Toronto and Hollywood’s elite. It’s here that stars like Ewan McGregor, Johnny Depp, Dustin Hoffman, Gary Oldman, and Mia Wasikowska have found a dark corner to enjoy an authentic Italian spread.

TIFF Bell Lightbox
As the official TIFF headquarters, the Lightbox is always a celebrity-filled hotspot, especially during the day as it hosts the press conferences, screenings, and premieres. Security is tight, but if you arrive early enough you can claim a spot on the street and catch a glimpse of a celeb on the red carpet or you can try grabbing a seat at the restaurant downstairs to watch who comes and goes.

One Restaurant at the Hazelton Hotel
The Hazelton Hotel is always a popular place for celebs to stay during TIFF and Bradley Cooper, Brad Pitt, Julia Roberts, Gerald Buttler and Jennifer Aniston have stayed and dined at its restaurant One during the festival. Many of the stars will arrive through the underground parking lot or the covered driveway, so keep your eyes peeled on these spots and the restaurant’s patio.

Montecito
This two-storey restaurant, owned by Ghostbusters director Ivan Reitman, is a TIFF celebrity hangout. Each year, a number of parties are held here for stars and over the years George Clooney, Ellen Page, Robert Downey Jr, Sigourney Weaver, Adam Sandler, Bill Murray, and Sandra Bullock have been spotted.

Soho House
This members-only club just so happens to  have a no smartphone camera policy, which means no selfies or photographic evidence so this is a celebrity goldmine during TIFF. You can expect to find privacy-seeking celebs, and in the past George Clooney, Julia Roberts, Ryan Gosling, Rachel McAdams, Kristen Stewart, Drew Barrymore, Emma Watson, Jennifer Lawrence, Keira Knightley, Eddie Redmayne, Emily Blunt, and Colin Firth have been seen partying here. Our advice? Become friends with someone who has a membership ASAP.

Windsor Arms Hotel
This classic boutique hotel not only hosts big stars during TIFF, but it also holds a number of swanky bashes throughout the festival as well. Over the years, a number of A-list celebs have been spotted wandering in and out of the front doors and hitting the streets of Yorkville. Celebs who frequent this hotel include Naomi Watts, Eddie Redmayne, Susan Sarandon, Idris Elba, Christian Slater, Dakota Johnson, Channing Tatum, Elizabeth Olsen, Rachel Weisz, Elle Fanning, Michael Shannon, Jessica Chastain, and Geoffrey Rush.

Momofuku
Connected to the Shangri-La, this three-storey venue is the perfect dining locale for A-listers to wine and dine. There’s the ground-level noodle bar, second-level Nikai for cocktails and Milk Bar for dessert, while the third floor is home to Daisho, which is perfect for large meat dinners, while Shoto is ideal for upscale tasting menus. Momofuku is open to the public, so book a reservation fast because you never know who you could be dining next to. Past sightings include Robert Downey Jr., Al Pacino, Tina Fey, Justin Theroux, Lupita Nyong’o, Liam Neeson, and Ralph Fiennes.

Thompson Hotel
The Thompson Hotel definitely boasts one of the most mesmerizing skyline views the city has to offer and during TIFF you can always find a few celebs enjoying the panoramic views. Over the years, Brad Pitt, Eddie Redmayne, Meryl Streep, George Clooney, Bradley Cooper, Kate Hudson, Carey Mulligan, and James Franco have been spotted here. We recommend having a cocktail at the lobby bar during TIFF, you never know who you might see walking through the front door.

Cabana Pool Bar
Located at Polson Pier, this Vegas-style pool bar comes equipped with plenty of covered, VIP cabanas, which are ideal for those trying to avoid the spotlight. Over the years, Drake and Justin Bieber have been seen taking in the stunning city skyline during TIFF.