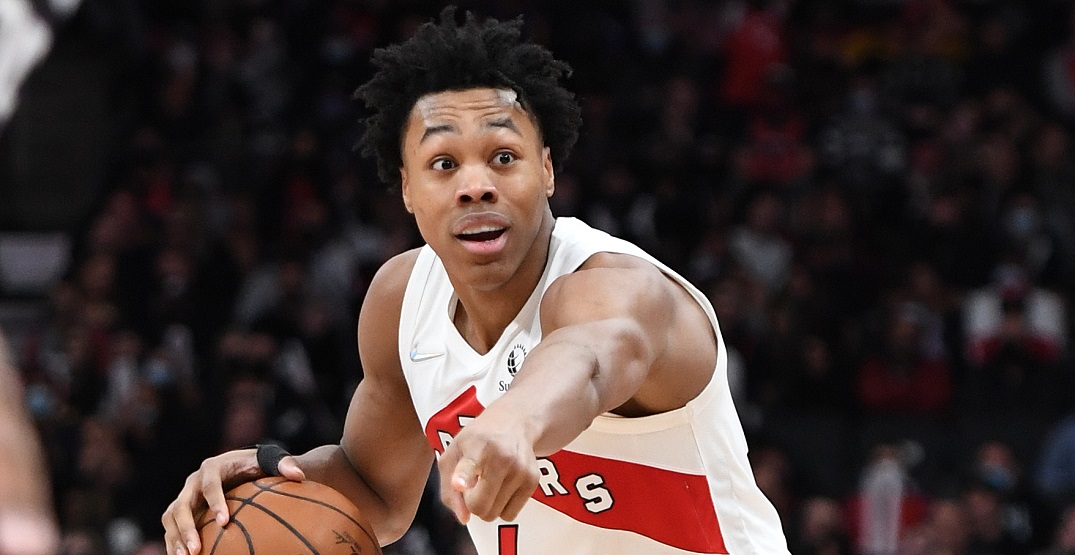 During last night’s home game against Sacramento, Barnes put up a career-high five blocks in a 124-101 blowout win for the Raptors.

Raptors head coach Nick Nurse was quick to praise Barnes’ big night on the defensive end of the floor.

“He was great,” Nurse said. “They were great blocks. Three were like really outstanding bucket-saving, kind of last-second blocks.”

And then there was the kicker, snuck in the middle of Nurse’s praise, about Barnes’ actual growth.

Barnes, like five of his other Raptors teammates in Dalano Banton, Chris Boucher, Pascal Siakam, Khem Birch, and Yuta Watanabe, is listed at 6’9″ per Basketball-Reference.

Meanwhile, NBA.com (matching his numbers at the draft combine) and ESPN have him listed at 6’7″. An earlier NBA.com draft profile had him at 6’8″. Last year’s Florida State roster had him at 6’9″. At the very least, there’s a discrepancy.

If Nurse’s assessment of Barnes’ height is indeed accurate, it’d make him the tallest player on the Raptors’ roster.

In a league where even an inch of height can make a massive difference in a player’s capabilities, Raptors fans were quick to react to the news.

When your star player is so young he's still growing LMAO https://t.co/GwKECmNIo7

Nurse had previously said earlier in the month that he didn’t think the 20-year-old Barnes had finished growing.

Barnes himself said last month to SI.com’s Aaron Rose that he was 6’9″, but only with shoes on.

Me: Scottie, how tall are you?

Me: What do you say?

A few fans also drew a natural comparison to two-time NBA MVP Giannis Antetokounmpo, who entered the NBA at 6’8″ as an 18-year-old, but was listed as 6’11” by the end of his rookie season.

It’s actually not the first time Scottie Barnes has been referred to as 6’10 by Nurse, having said the same thing before a Raptors preseason game against Boston in October.

Nick refers to Scottie as 6-10. Let’s just make up a new height for him every game.

But some Raptors fans think that Nurse might’ve just been pulling everyone’s legs a little bit.

I wished I loved anything as much as Nick loves lying https://t.co/bLv80PllYc

Did Scottie deadass grow to 6'10?
Is this Nicholas lying again?

It also draws comparisons to Nets forward Kevin Durant, who was listed at 6’9″ for years before admitting he was actually closer to 6’11, but “just liked messing with people.”

At this rate, Barnes could be eight feet tall by next week.