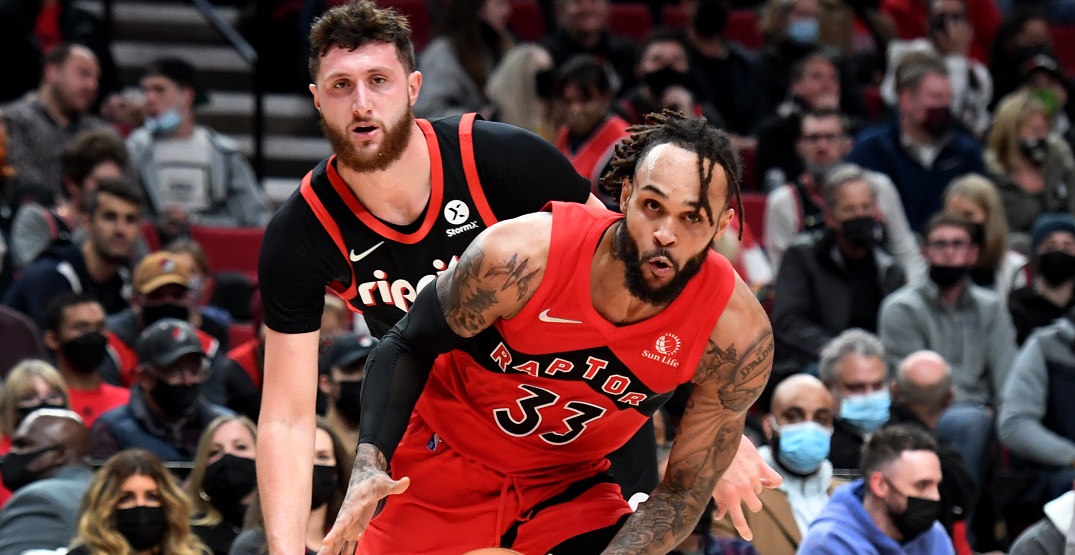 The identity of the Toronto Raptors’ foundation has often been a team that’s built from the ground up: through smart drafting and a savvy trade strategy.

Looking back at the 2019 championship roster, key pieces like Kyle Lowry, Serge Ibaka, Danny Green, Marc Gasol, and of course, Kawhi Leonard, all came to Toronto via trade.

But the truth is the Raptors really haven’t made a big move in a while. They’ve made just three trades over the last three seasons since winning the NBA championship, or four if you include the Kyle Lowry sign-and-trade to Miami this offseason.

Just three current Raptors — guard Gary Trent Jr., forward Precious Achiuwa, and guard Goran Dragic (who hasn’t played since October and is currently on a personal leave from the team) were acquired via trade.

There’s an overwhelming sentiment with this Raptors team: they don’t really know how good they can be, simply because they haven’t had too much time together yet.

Forwards OG Anunoby and Pascal Siakam have both missed 12 games each this season.

And then there’s the team’s most pressing concern: their complete lack of healthy centre options. Khem Birch has also missed 12 games, while Achiuwa has now missed six.

It’s understandable why the Raptors might be cautious in the trade market, which is set to get heated up as of December 15, when restrictions on trading many recently signed players are lifted across the league.

Through it all, the team has strung together a 13-14 record while trying out all sorts of different lineup combinations, good enough for 10th in the Eastern Conference. It’s not a fabulous record by any means, but they’re just 1.5 games out of sixth place in a tight, and wide-open Eastern Conference.

It’s not too hard to imagine a healthy Raptors with a flashy new centre could sneak their way into the play-in round, or perhaps even the top-six guaranteed postseason spots.

Should Toronto choose to look to add to their roster, here’s three centre options the Raptors could realistically pursue in a trade this season:

Eight seasons into his NBA career, Jusuf Nurkic provides a veteran option that has served in a starting role regularly since his age-22 season. At 6-11, Nurkic would be instantly two inches taller than any other Raptors’ player, giving the team some sorely needed size.

The Blazers are in a bit of a bind right now, with an 11-16 record. Like the Raptors, they’re sitting 10th in their respective conference. But unlike the Raptors, frustrations are much higher amongst the fanbase, as a team with an eight-year playoff run looks like they could be in need of a shakeup. With Nurkic’s contract expiring this offseason, he could be a prime target for Toronto.

Myles Turner was just one of many high-profile Pacers floated out as available on the trade market, following a bombshell report last week from The Athletic that Indiana was looking to transition toward a rebuild.

Turner leads the league right now with 2.8 blocks per game, 0.6 higher than anyone else in the league. A solid rim protector like Turner would be coveted by Raptors head coach Nick Nurse to help out on the defensive end of the floor.

Rookie Scottie Barnes leads the Raptors with 1.0 blocks per game, but the addition of Turner could bring the Raptors’ defence up another level.

The Houston Rockets have found their groove, winning eight of their last ten games. Which sounds great in isolation, as long as you ignore their dismal 1-16 record to begin the year.

Christian Wood has been a big part of the Rockets’ recent hot streak, putting up 20 points in six of the teams’ last ten games. But it probably also tells you everything you need to know about where Houston is as an organization that Wood is leading the team in scoring with just 16.5 points per game.

The Rockets are set to be a team drafting high in the foreseeable future as they look to build around 2021 second overall pick Jalen Green. If the Raptors are inclined, Wood could be the perfect target to help fix their struggles at centre.