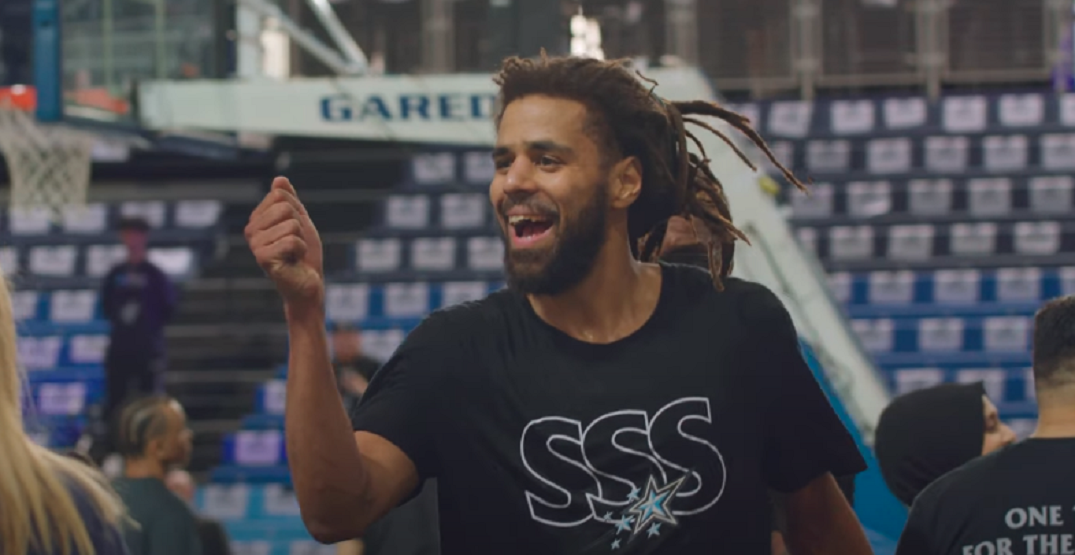 The Scarborough Shooting Stars have a pretty simple formula for business success: buy your tickets for some celebrity spotting, and stay for a basketball game.

Playing out of Scarborough’s Pan Am Sports Centre, the Shooting Stars expansion franchise of the Canadian Elite Basketball League officially opened off their home schedule on Saturday night.

While the Shooting Stars fell 84-69 in a game where they didn’t quite look to be firing on all cylinders, the on-court action was almost secondary to the game’s atmosphere.

A sold-out crowd was treated to plenty of star power for the $50 price of admission.

As you may have heard, Scarborough’s biggest name has played just seven games of professional basketball, Grammy-Award winning rapper J. Cole (or Jermaine Cole, according to the scoresheet.)

And yes, Drake pulled up courtside, the only other person in the facility to have a custom Cole jersey.

Drake showed up to support J. Cole in his game for the Scarborough Shooting Stars 💯

But whatever you’d like to call it: a PR stunt, a cardio run, or just a 37-year-old trying to live out his professional athlete dreams, he’s been bringing some eyeballs to a quality product.

Cole’s own hit “No Role Modelz” graced the speakers as he checked into the game for a big ovation.

No Role Modelz plays as Jermaine Cole subs in for Scarborough. Betting that’s the first time in professional history a player’s own song has played as they enter the court, but willing to be proven wrong pic.twitter.com/7y8RWMTbhc

Hamud Mbarak, known professionally as poet Pen Moodz, described the emotion he had while sitting courtside for the opener.

“The energy was electric,” Mbarak said in an interview with Daily Hive. “Scarborough Shooting Stars and the CEBL put on a celebration of culture for the endsss.”

“The endsss” comes from a mixture of “the ends,” slang for one’s neighbourhood, and SSS, the Shooting Stars’ acronym. Conveniently, “ONE TIME FOR THE ENDSSS” is displayed behind the baseline on one side of the court.

Mbarak serves as the “face and voice” of the CEBL, narrating the league’s pregame promo hype video shown before each contest.

“From tip off to the final whistle it was clear that everyone in attendance was witnessing the future and evolution of Canadian basketball,” he added about Saturday’s atmosphere.

Shooting Stars head coach Chris Exilus had a similar view of the experience.

“I think this day when we look back it at it’s going to be a very historical day,” Exilus said. “It’s a way that kids get to see professional basketball players that they might not be able to see. It’s going to inspire young kids for years to come.”

At 1-3, Scarborough finds itself in eighth place in the ten-team CEBL.

Former Raptor Jalen Harris leads the team in scoring with 16.2 points per game, but hasn’t quite been able to will the team to victories as some may have expected. In the 20-game regular season, it’s still early, but blink and you’ll miss it: there are just nine home games left in Scarborough this summer.

Tickets are still available for Tuesday’s Shooting Stars contest against the Newfoundland Growlers, but they’re available in limited numbers. As of press time, there are fewer than 30 seats listed on Ticketmaster.

“It’s only us and the Blue Jays playing right now,” Stars player David Muenkat told media prior to the season. “So people are definitely going to be looking for entertainment.”