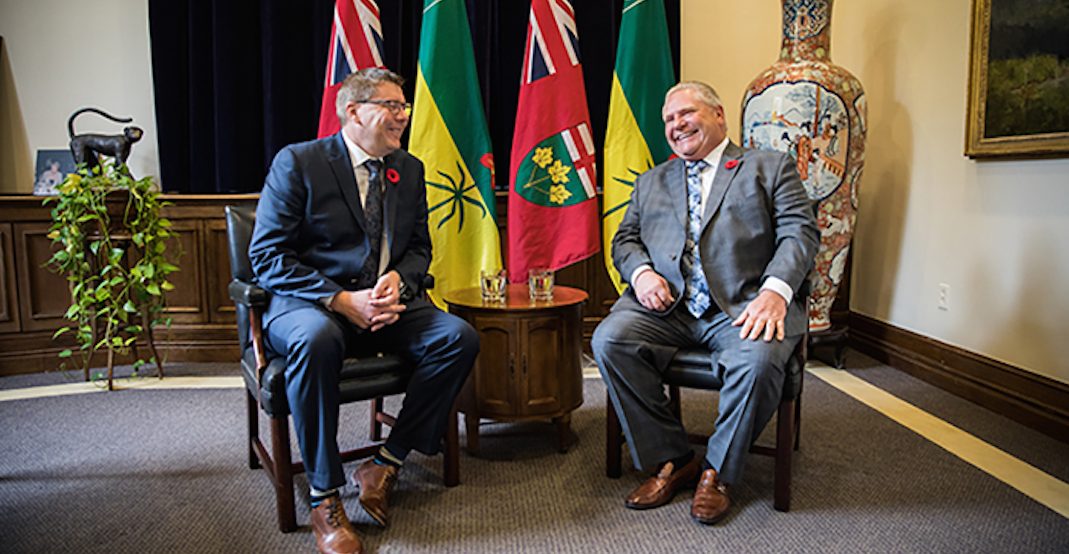 Premier Moe and Ford/Province of Ontario

Last fall, the premiers of Ontario and Saskatchewan met in Toronto to discuss how the two provinces can work together to fight the federal government’s “massive job-killing” carbon tax.

At the time, Saskatchewan premier Scott Moe joined Doug Ford at Queen’s Park to determine how they can join forces to further protect taxpayers.

During their October meeting, Ford alleged the tax will force residents to pay higher gas prices and home heating costs, in addition to thousands of people losing their jobs.

Both provinces then instituted a court challenge against the federal legislation.

And on May 3, the Saskatchewan Court of Appeal ruled in favour of the federal government in its decision on the carbon tax, which came into effect on April 1.

The court decision concluded, “The Greenhouse Gas Pollution Pricing Act is not unconstitutional either in whole or in part.”

“The factual record presented to the Court confirms that climate change caused by anthropogenic greenhouse gas [GHG] emissions is one of the great existential issues of our time,” read the court file. “The pressing importance of limiting such emissions is accepted by all of the participants in these proceedings.”

The Court of Appeal ruled 3-2 in favour of the federal carbon tax.

Moe said that he is disappointed with the ruling.

“Though I am disappointed with today’s ruling, our fight will continue on behalf of Saskatchewan people – who oppose the ineffective, job-killing Trudeau carbon tax. It was a 3-2 split decision and we look to appeal to the Supreme Court of Canada,” he said.

Though I am disappointed with today’s ruling, our fight will continue on behalf of Saskatchewan people – who oppose the ineffective, job-killing Trudeau carbon tax. It was a 3-2 split decision and we look to appeal to the Supreme Court of Canada. pic.twitter.com/dbkcNi1Mc9

Kenney calls it a “carbon tax cash grab” and says he will support Ontario when in court.

This regressive, job-killing carbon tax will impede Ontario and other provinces to stay competitive. I’m so glad that @jkenney is joining this fight. Let’s get rid of the carbon tax and make Ontario open for business and open for jobs. pic.twitter.com/DjD7aOVqqe

In a statement, the Ontario government says it continues to stand “united with the government of Saskatchewan and remains committed to using all available resources to oppose the federal government’s carbon tax, including through the courts.”

Ontario is part of a coalition of provinces, including Saskatchewan, Alberta, Manitoba and New Brunswick, pledged to fight the federal government’s Greenhouse Gas Pollution Pricing Act.

The province’s challenge was heard at the Ontario Court of Appeal from April 15 to 18 and the court is considering its decision.

The Ford government argued that the provinces, not the federal government, have the primary responsibility to regulate greenhouse gas emissions and that the regulatory charges the act seeks to impose are in fact unconstitutional disguised taxation.