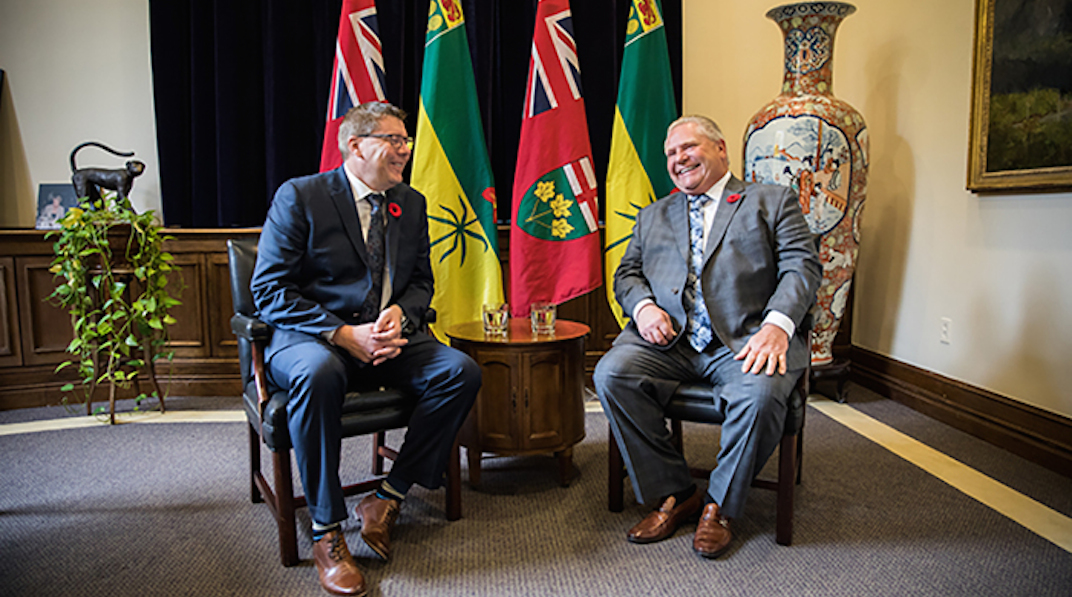 The premiers of Ontario and Saskatchewan met in Toronto Monday afternoon to discuss how the two provinces can work together to fight the federal government’s “massive job-killing” carbon tax.

“This is what being ‘open for business’ is all about. While the federal government dreams up new ways to tax you, we’re thinking about new ways to create jobs,” said Ford in a release.

“I am so proud to have a partner like premier Moe work with us to make new jobs, new investment and new growth a reality in both provinces.”

During their meeting, both premiers discussed their shared opposition of the carbon tax,  which Ford alleges will force residents to pay higher gas prices and home heating costs in addition to thousands of people losing their jobs.

“Our government is proud to have joined Saskatchewan’s court challenge of the carbon tax and we are deeply grateful that Saskatchewan intends to support our challenge as well. We will use every tool at our disposal to fight this tax,” said Ford.

Both provinces are now involved in a court challenge against the legislation.

Ford and Moe also discussed their commitment to reducing interprovincial trade barriers, revealing to reporters they had both signed a memorandum of understanding on the issue.

“Saskatchewan and Ontario stand united in our fight against the carbon tax,” said Moe. “We also stand united in acknowledging the importance of the trade relationship between our provinces, and I am pleased to join Premier Ford to discuss how we can continue lowering interprovincial trade barriers.”

According to a just-released report, Sizing Up Provincial Trade Barriers, from BMO Capital Markets, the impact from free interprovincial trade would cumulate over a decade to add as much as 2% to national GDP, or nearly $50 billion in total.

For Ontario alone, “the net positive addition to output would build to a range of $15 billion-to-$20 billion over ten years.”