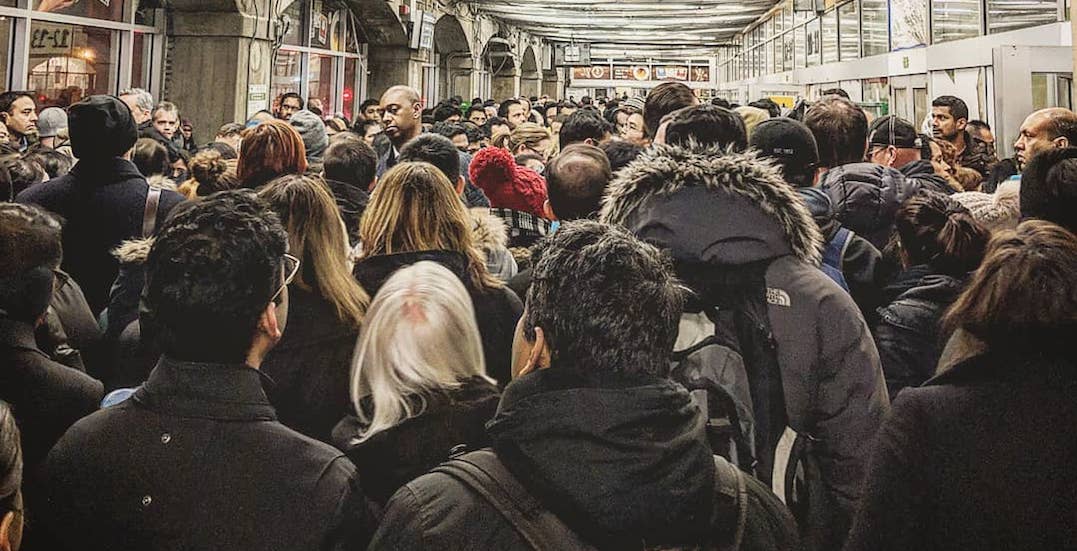 Tomorrow’s commute home is bound to be even more bustling than usual.

The Toronto Maple Leafs are facing the Minnesota Wild at 2:00 pm tomorrow afternoon, which is great afternoon fun!

But it also means that, with the game ending around 4:30 pm, the area around the Scotiabank Arena, Union Station, and the TTC are likely to be busy with fan traffic just as rush hour is beginning.

Metrolinx told Daily Hive that they have worked alongside Toronto Police Services, Maple Leaf Sports and Entertainment, the TTC and the City of Toronto to develop a transportation management plan for the event.

The City tweeted today that to accommodate the volume of pedestrians after the game, police will close Bay Street southbound from Front Street at approximately 4:30 pm. It will remain closed for about an hour to accommodate foot traffic.

To accommodate additional pedestrian volumes around @ScotiabankArena following tomorrow’s @MapleLeafs game, southbound Bay St will be closed from Front St at approx. 4:30 p.m. for about one hour. If you aren’t taking @GOtransit, you can walk on Bay St to access Front St. pic.twitter.com/sP3Wg4cQW9

People who don’t require GO Transit service are being asked to walk on Bay Street, rather than going through Union Station. TTC customers are advised to walk to St. Andrew station, avoiding Union as well.

Additional transit safety and station staff will be on duty to help direct and manage the crowd, and all of Union Station’s doors will remain unobstructed.

Attention #Toronto! Tomorrow’s @MapleLeafs game will end during rush hour. Extra staff will be on duty to ensure fans & commuters navigate safely around @unionstationTO. Southbound Bay St. will be closed from Front St. at 4:30 pm for an hour. Plan ahead and expect large crowds pic.twitter.com/VzlttNxkj3

So keep your head up, and consider a second coffee to make sure you’re extra alert tomorrow. It’s not the day to let those sluggish post-holiday feels slow you down.