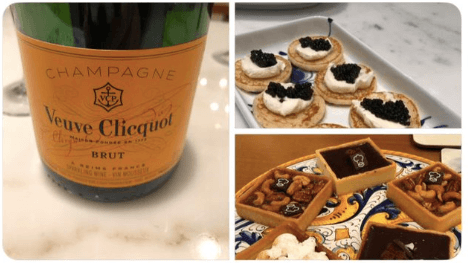 The head of the Ontario Chamber of Commerce is being served a slice of humble pie, after a tweet from his personal account on New Year’s Eve has resulted in a public apology.

Just after 9 pm on December 31, Rocco Rossi, president and CEO of the Ontario Chamber of Commerce, posted several photos of his 2019 celebratory snacks, along with the line “Celebrating New Year’s the 1-percenter way! Let them eat cake.”

The photos appear to be of several servings of caviar, a bottle of Veuve Clicquot Brut Champagne, and decadent desserts — likely the cake he was referencing. 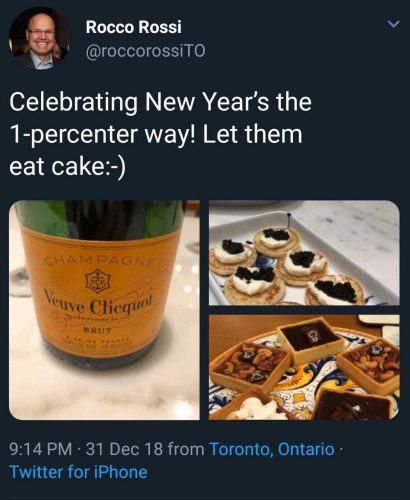 The line “let them eat cake,” is famously attributed to Marie-Antoinette, the queen of France during the French Revolution (though she probably never actually said it). When told that the peasantry had no bread, Antoinette is said to have suggested they try cake instead, a sign of how out of touch the aristocracy had grown with the people.

Though Rossi has since publicly apologized for the tweet, saying it was “meant to be satirical but in retrospect was insensitive and caused offence,” it’s timing is particularly bad, as January 1 was the original date for the minimum wage increase to $15 an hour.

Both Rossi and the OCC were publicly opposed to the raising of the minimum wage and supported the Ontario government’s Bill 47.

I sent a tweet out on New Year’s Eve that was meant to be satirical but in retrospect was insensitive and caused offense. I sincerely apologize for the tweet as it was never intended to offend.

In Bill 47 or the Making Ontario Open for Business Act, 2018, the province eliminated an increase to the minimum wage as of January 1. The bill was also amended to provide that the minimum wage “is subject to an annual inflation adjustment on October 1 of every year starting in 2020.”