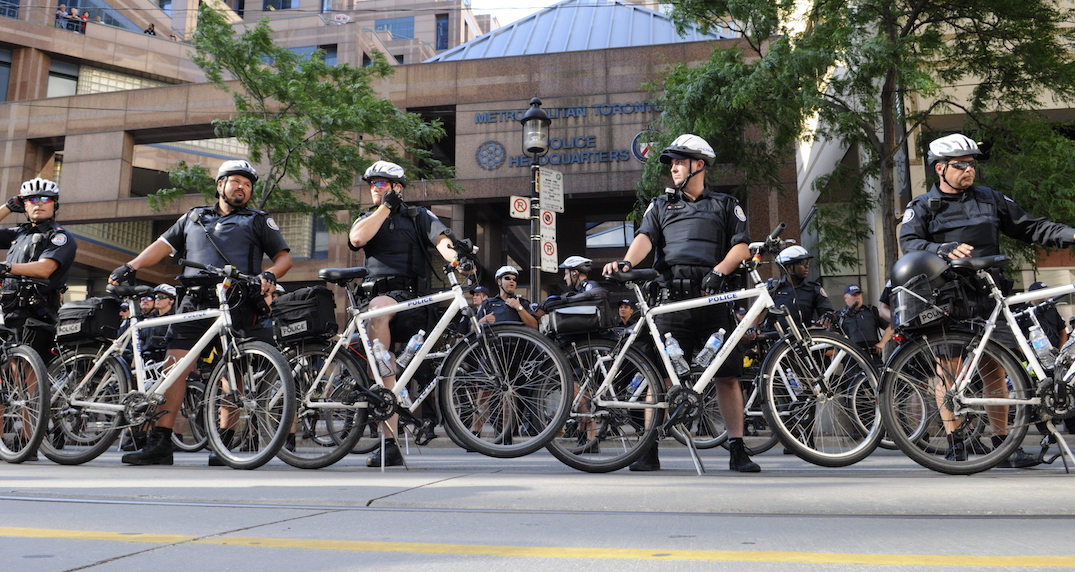 Toronto police outside headquarters during protests in June. (Arindambanerjee/Shutterstock)

Mayor John Tory said that “the time for reform is now” regarding a new report on how to have better police accountability and transparency.

On Tuesday, Tory said that the report includes an “ambitious series of reforms” which is supported by the Toronto police board chair, executive director, interim chief of police, and advisory panels.

City council and the Toronto Police Service Board worked to create the report of 80 recommendations — in consultation with the city’s Confronting Anti-Black Racism unit — which will be reviewed by the board next week.

“The time for reform is now. The process begins for real change which will be implemented in coming weeks, not months or years. And we will communicate to the public as reform is happening,” Tory said during the press briefing.

“We know we must do more. Systemic racism in policing harms the rights of Black and Indigenous people in the city. This is not acceptable to me as the mayor.”

Tory said that city council and the police service board did “intensive” work to address the “very real concerns” raised about anti-Black racism in Toronto’s law enforcement.

He noted that systemic racism continues to be a “real issue” in Toronto and there is much more his government can do to confront it.

“We have not acted enough or fast enough. We have heard this message loud and clear.”

The Toronto mayor said that council discussed a lengthy list of reforms during the June meeting and the police service board conducted four town halls to hear consultations directly from residents.

“This has lead to the next significant policing reforms reports which is being released publicly today and goes to police services board for consideration next week,” Tory said.

The reform report has 80 recommendations which are divided into 10 themes:

Tory noted that while there are many reforms, the most significant involve working with the police service and city manager on non-police service response, such as the mobile mental health and addictions response to different types of crises.

The funding for this response will be reallocated from the police budget to support alternative community safety models as well as direct the Chief of Police to expand the mobile crisis intervention team across all of the city’s divisions.

Tory said that currently the mobile team is only available for limited hours in select places, but would become available 24 hours a day, seven days a week.

There is also a need to include the auditor general to start auditing the service in order to improve delivery and redistribution of funding.

The mayor added that they will urge the Ontario government to change provincial law to expand instances where officers are suspended without pay for serious misconduct.

The recommendations also include a new model on de-escalation and minimizing force, which can also only change by provincial legislation.

And, to have permanent anti-Black racism training by mandating a stand-alone training course.

“We need a police service that works for everybody,” he said and to work with other levels of government to ensure these reforms are implemented.