Over the last week, residents of the west end neighbourhood have been sharing their experiences in the Liberty Village Residents Association online group.

And these experiences all relate to allegedly one red-winged blackbird, who has since been named “Dive bomb Dave.”

Signs were put up in Budapest Park, Lake Shore Boulevard Parklands, Little Norway Park, and the Toronto Music Garden at the time.

According to Bird Studies Canada, the blackbirds that are flying up to people in those park were “protecting their own.” The national charitable organization recommended giving the birds some space, and said they will leave you alone.

“Behaviour will abate when nesting season is over,” they said.

And looks like Liberty Village really hope that season is over soon.

Many have shared videos of Dive bomb Dave, and others have began warning residents of where “Dave” has been attacking. It appears he is generally around Liberty Village Park.

And because the group is on Facebook, one resident created a “Marked Safe from Dive bomb Dave” sign… which apparently not many people can use there these days. 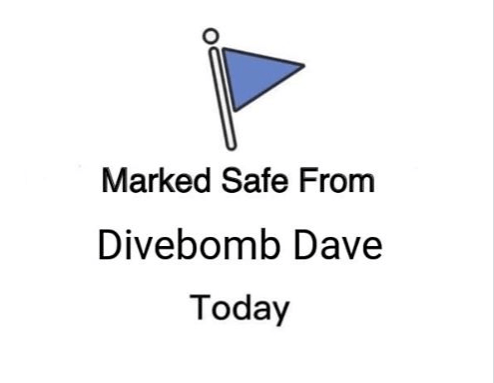 And Dave is so popular right now, someone even created him a Tinder account.

According to the Canadian Wildlife Federation, The male red-winged blackbird “defend their territories and their mates very aggressively, chasing any competitors out of the area.”

They also aggressively display “to females, trying to impress them with their fine-coloured wings.”

The males, like Dive bomb Dave, become defensive of their territory almost as soon as they occupy it.

Which really does explain this…

@cp24 some footage of the Liberty Village Blackbird pic.twitter.com/nZDlhMeB7e