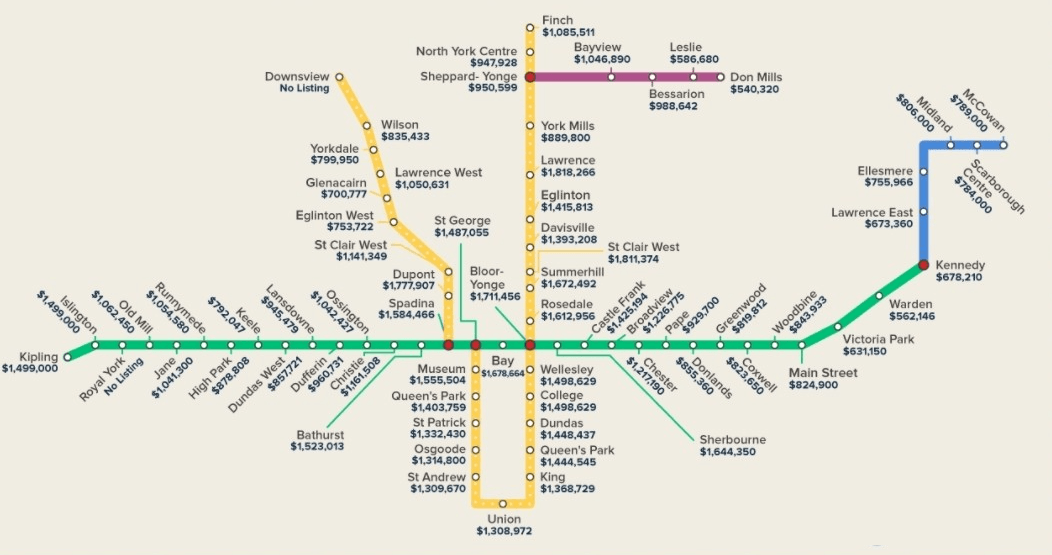 Real estate in Toronto is always a hot topic.

From prices to locations, everyone has their preference on importance. And to many in the city, living close to the subway weighs in as another significant factor.

Using property data near subway stations, listing website TheRedPin has provided several maps that addresses the cost of this importance. As noted by the site, the results may surprise you.

For those looking for condos, the first map provided by TheRedPin shows the wide range of prices available throughout the city. Near Kennedy Station in Scarborough, a one-bedroom condo is under $150,000. Meanwhile moving east, around Pape Station, you’re looking at an average of almost $631,000.

And perhaps most surprising, a condo near Union Station averages around $552,000. Who knew downtown would be cheaper than the east end? 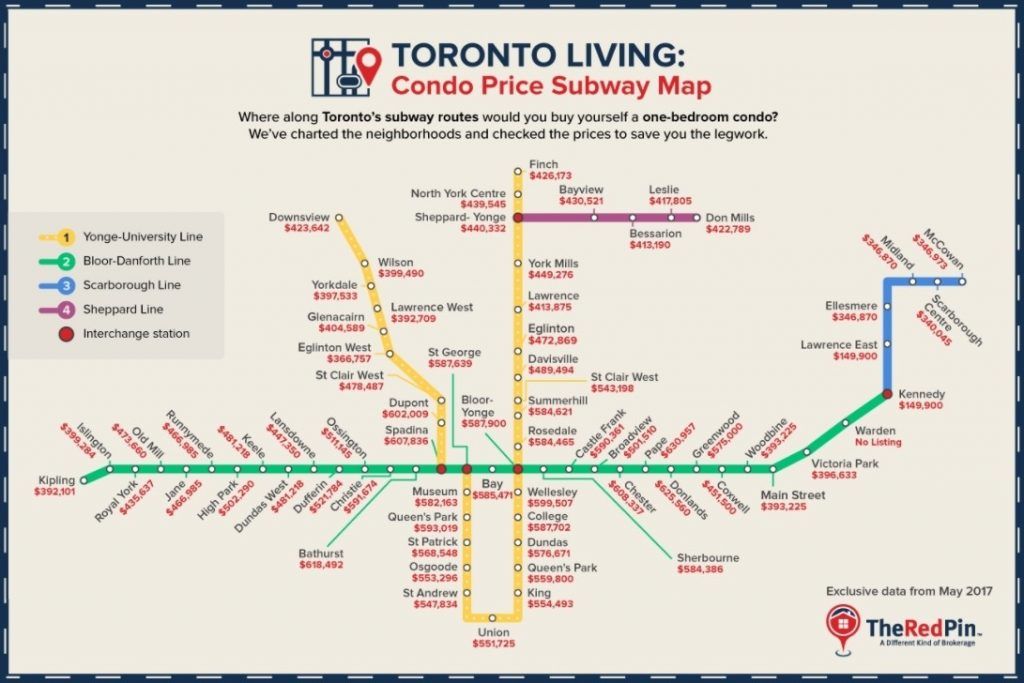 For those seeking for more space, TheRedPin has also looked at the cost of townhouses.

The map shows how much difference a few stops makes in terms of costs. Along the Yonge-University Line, average costs for townhouses near Wilson is around the $835,000 mark, but moving four stops to St Clair West sees a 27% hike in prices. That stop’s average townhouse cost is near $1,141,000.

Along the subway lines, the cheapest townhouses in the city are on the Sheppard Line near Don Mills and Leslie, and along the eastern end of the Bloor-Danforth line, where prices range from $540,000 to $562,000.

As for the priciest, that would be near Lawrence Station at an average cost of $1,818,266. 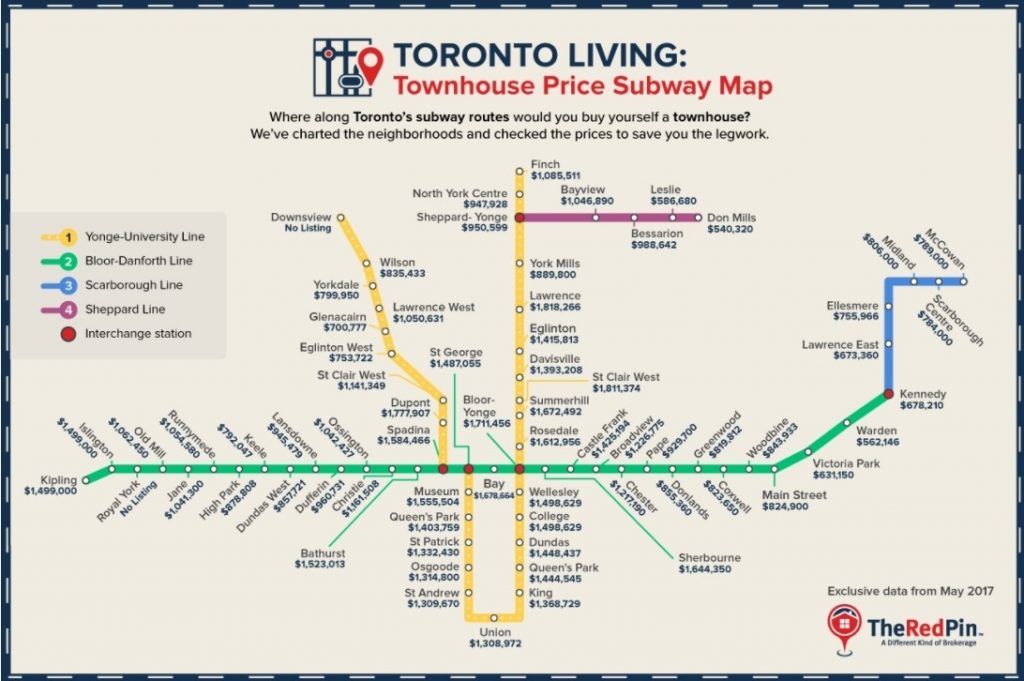 Looking at both previous maps, you can see a pattern of price along the different subway lines. And purchasing general properties follows the same pattern.

Housing across the eastern end of the Scarborough line tends to be much lower than average, at under $700,000. That number, to no-one’s surprise, skyrockets to the millions once you hit uptown.

Home costs around York Mills and Lawrence on the Yonge-University Line ranges between $2 and $2.5 million. 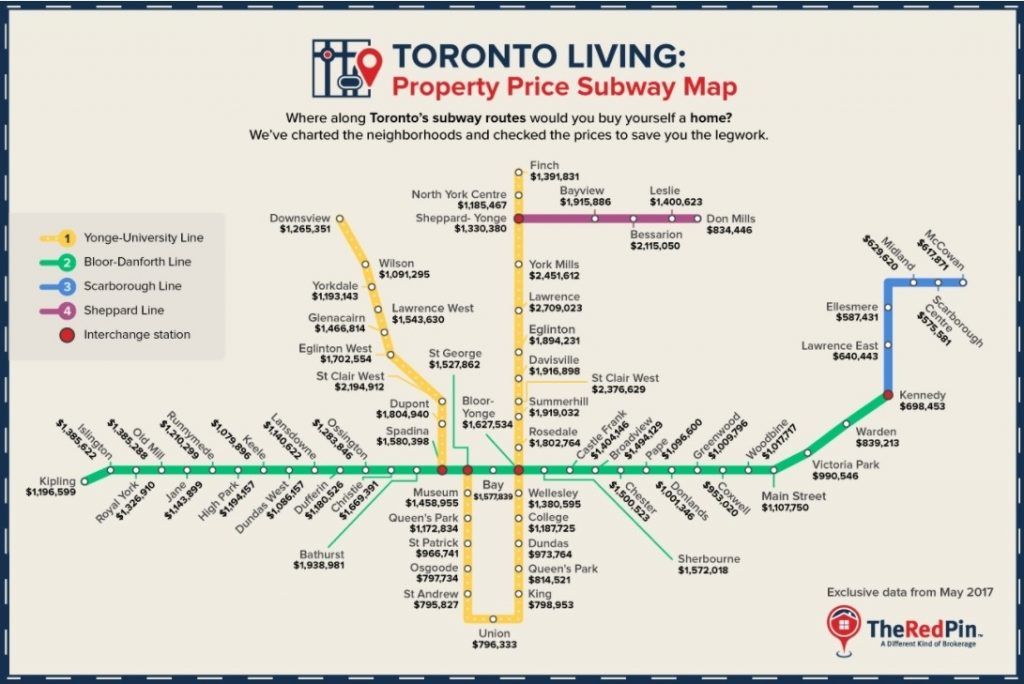 While the real estate market has been hot in Toronto, there’s some hope that it will be cooling down soon. And hopefully bringing down some of these prices, especially since our transit is generally very expensive as well.