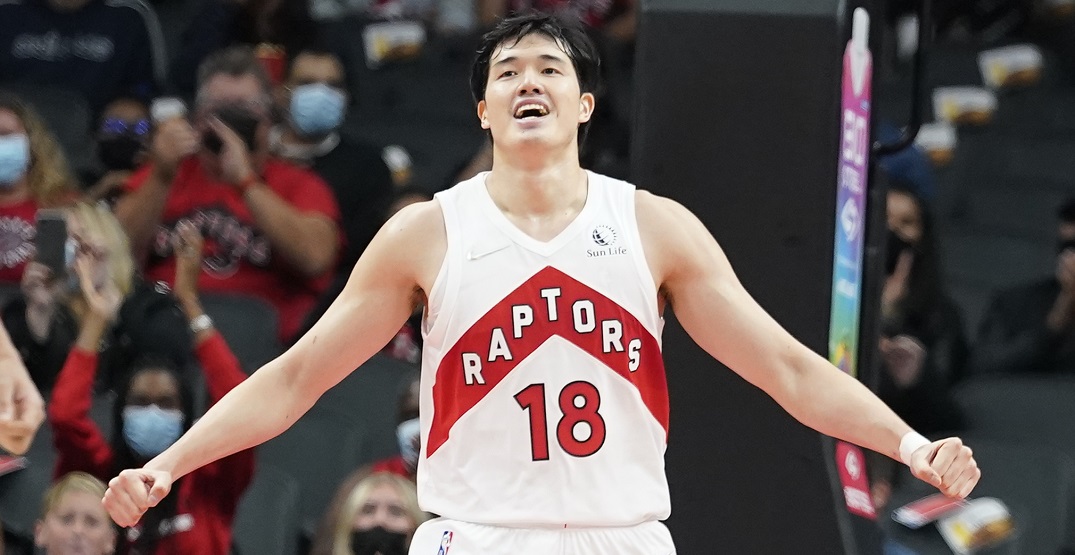 Toronto Raptors forward Yuta Watanabe hasn’t had the smoothest start to the season.

After the team played the entirety of its home games in Tampa, Watanabe suffered a calf strain injury in the preseason that kept him out for over a month and a half.

Watanabe finally made his season debut on the road Wednesday against the Memphis Grizzlies, coming off the bench in a 126-113 win.

Watanabe is set to play his first Toronto home game as a Raptors player this Sunday against the Boston Celtics, and is eagerly anticipating his Scotiabank Arena season debut.

Few would say that Watanabe’s on-court presence is much more than a depth rotation player — he finished 11th on the Raptors in minutes played last season.

But across Canada and in his home country of Japan, the man simply known as Yuta has built a fanbase. During his injury recovery, Watanabe said he’s grateful for the widespread support.

“I just want to say thank you for showing me some love,” Watanabe said when asked about what message he has for Raptors fans. “Even though I wasn’t playing, I was able to feel the fans showing some love. I’m excited to go back to Toronto and play in front of amazing fans.”

Here's Yuta Watanabe's answer when I asked about what it'll be like to play in Toronto for the first time as a Raptor.

Said he's been feeling the love from Toronto fans, despite: pic.twitter.com/IWGkeUA5x7

Six reporters from Japan showed up for Watanabe on Wednesday night. After taking questions in English, Watanabe answered questions in his native tongue for over 15 minutes. This is by far the longest postgame media availability by a Raptors’ player so far this season.

His blocks, including this one on Memphis’ Dillon Brooks, really got Raptors fans excited in his return.

YUTA WATANABE HAS NO FEAR pic.twitter.com/RXtgAoYgyE

While the Raptors proclaimed “Yuta Watanabe has no fear,” it’d be understandable if there was a little hesitation on his end putting himself in physical situations.

Last season, Watanabe was on the receiving end of a poster dunk from Anthony Edwards of the Minnesota Timberwolves that hit highlight shows for weeks on end.

But when asked about his willingness to contest players driving to the basket after being on the wrong end of a dynamic play, Watanabe said there’s no resistance on his end.

“If I had a chance to jump 100 times… I’ll jump 100 times,” he told reporters postgame. “No matter what happens I’m gonna just keep keep hustling, keep bringing energy to the team.”

“He was a nice spark tonight,” Nurse said. “He’s a versatile defender. He can guard a smaller guy coming off a switch, or if he gets switched on to a bigger guy that takes him inside, he’s got some size. More than anything, he’s got some fight.”

Before coming home to Toronto, Watanabe and the Raptors will take on the Pacers in Indiana on Friday night. Tipoff is set for 8 pm ET, with the game being broadcast on TSN as well as carried on the radio on Sportsnet The Fan 590.