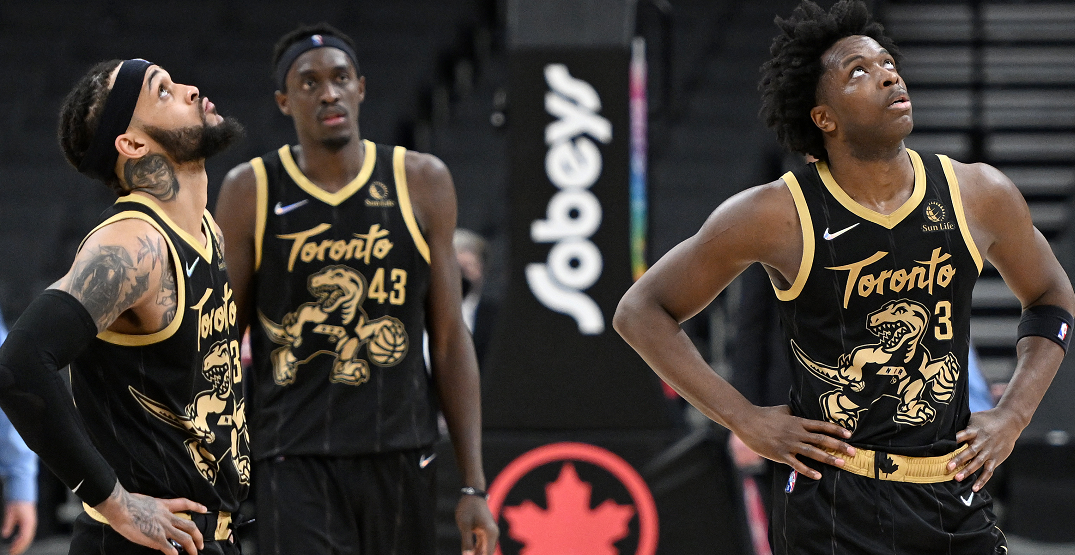 The Toronto Raptors didn’t get a true look at their ideal starting lineup for much of this season.

Whether it was COVID-19 outbreaks or lingering injury issues for just about any player on the roster, the Raptors only got about a quarter of a season out of their true starting five.

By the end of the year, Nick Nurse found his ideal group: Pascal Siakam, Fred VanVleet, OG Anunoby, Gary Trent Jr., and Scottie Barnes. That group played together for 345 minutes, across just 21 games. That’s less than eight percent of the minutes available across a whole season, but it was still the team’s most frequently used five-man unit.

Injury woes persisted in the playoffs, with Barnes, VanVleet, and Trent Jr. all missing games against the Philadelphia 76ers. The Raptors’ “Group of Five” played a grand total of eight minutes together in the playoffs.

In the regular season, eight players started 25 or more games: those five mentioned above, as well as Precious Achiuwa, Chris Boucher, and Khem Birch.

Players like Barnes, Anunoby, Boucher, and even Siakam epitomize the Raptors’ ‘positionless basketball’ movement they’ve been synonymous with.

It gives the team plenty of looks to consider when healthy, and enough flexibility to switch things around when they’re not.

Barring a trade, much of the roster will remain largely the same next season, with Boucher the only possible key Raptor that could depart in free agency.

If the Raptors want to trot out a largely similar starting lineup, assuming everyone’s healthy, there’s not much stopping them from doing so. But what if it’s time to tinker with it a little bit?

Surely Barnes, VanVleet, and Siakam have done enough to secure their roles in the starting lineup.

But would a player like Trent be better suited coming off the bench? What about Anunoby? This isn’t a knock on their skill level or ability.

It’s just a matter of the puzzle that comes with NBA roster construction, and wondering how it all fits in the ultimate goal of winning an NBA championship. Is Achiuwa’s role as a starter just around the corner, or is he better suited as an injury replacement?

Great teams are often buoyed by having an extremely talented sixth man of the roster, who’s still able to fill in for upwards of 30 minutes on any given night.

The biggest hole to fill would be finding a traditional “big man” centre to join the lineup, with the Raptors rarely trotting out a player taller than 6-9 in that spot this season. Does that come from a second-round draft selection that pans out well? Does that come from a trade or free agency? Or do the Raptors simply run it back with a similar group and hope they’re able to replicate the results of this year’s 48-win season?

There’s plenty of questions wondering what the Raptors’ starting lineup will look like next year. The answers aren’t quite as clear right now.