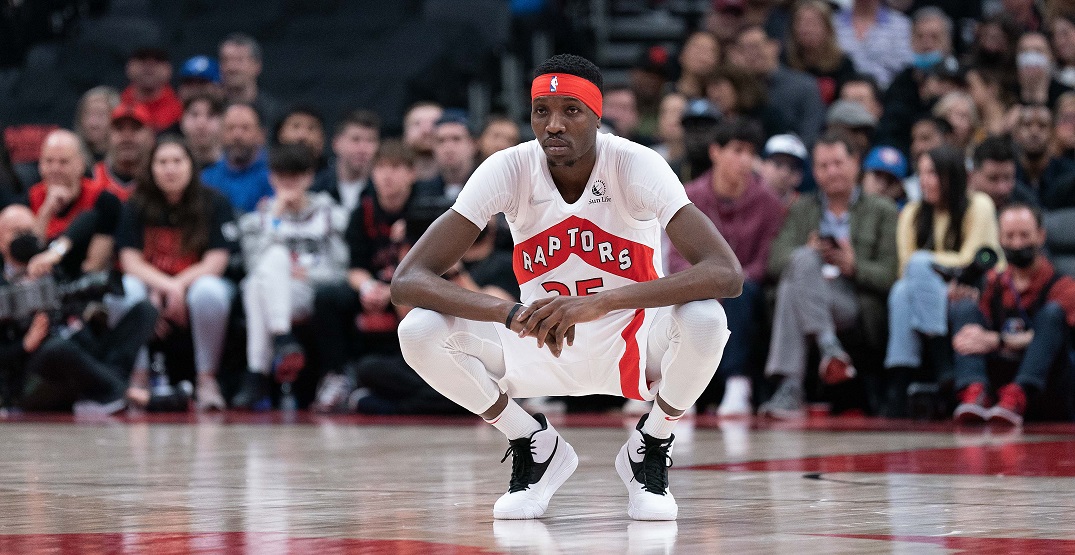 In many ways, Chris Boucher is one of the greatest success stories in Toronto Raptors history.

A depth player on their 2019 championship roster who was an undrafted free agent out of Oregon, Boucher finds himself now as one of the Raptors’ longest-tenured players.

If he returns to Toronto, he’ll be the second oldest Raptor on the roster, after centre Khem Birch. But that is a big question mark heading into this offseason, with Boucher being available as a free agent.

Toronto holds Boucher’s Bird rights, essentially meaning they’ll have the best money to offer him out of any possible suitor. Having spent his whole playing career in Toronto, save for a one-game stint with the Golden State Warriors in 2017-18, there’s plenty of reason to expect Boucher would want to return to Toronto.

“I love Toronto,” Chris Boucher said during last week’s end of season Raptors’ media availability. “Toronto did a lot for me. From the young player I was when I came here to who I am now, I owe it all to Toronto.”

With 1690 minutes played across 80 games this season, Boucher was the seventh most-used Raptor. No Toronto player suited up in more games. But it wasn’t all smooth sailing for the fifth-year pro, who’s spoken at length about his struggles throughout the season.

“I didn’t see any up,” Raptors head coach Nick Nurse told reporters after a game in October when asked if Boucher was too up-and-down. “He needs to start playing better, period.”

“I was really hard on myself,” Boucher admitted about his early-season struggles.

Nurse said that Boucher’s high energy level was one of his biggest assets to the Raptors this season.

“I’d call his name and he’d sprint from that end of the bench up to the scorer’s table and tear off his warm up and you could feel [Boucher thinking], ‘here I come, man,'” Nurse told reporters earlier this week. “He hit the court and he could feel it. I think he was a tremendous boost to us.”

Free agency officially opens July 6, though Boucher is eligible to sign an extension with the Raptors at any point. Boucher was previously on a two-year, $13.52 million deal.

“I haven’t thought about it, to be honest,” Boucher said about free agency. “I think did a good job just to put myself and my family and everybody that worked and helped me out to get to this point.”

In Toronto, there’s familiarity, both with the city, the team, and his role moving forward. All six players above Boucher in the rotation: Scottie Barnes, Pascal Siakam, Fred VanVleet, OG Anunoby, and Precious Achiuwa are under contract next season with the Raptors. If he wants to play elsewhere, though, there should be no shortage of suitors for the veteran forward.

Boucher isn’t likely to be a regular starter in Toronto (or most of the NBA), but he’s shown his worth as a valuable depth piece. Boucher upped his averages to 11.2 points, 5.8 rebounds and 1.2 blocks in the Raptors’ six-game loss to the 76ers these playoffs, including 25 points in Game 6.

“I think we did a really good job just staying together and we got that playoff experience and everything so I think it’s gonna be it’s gonna be a good summer when we think about [how our season went],” Boucher added.