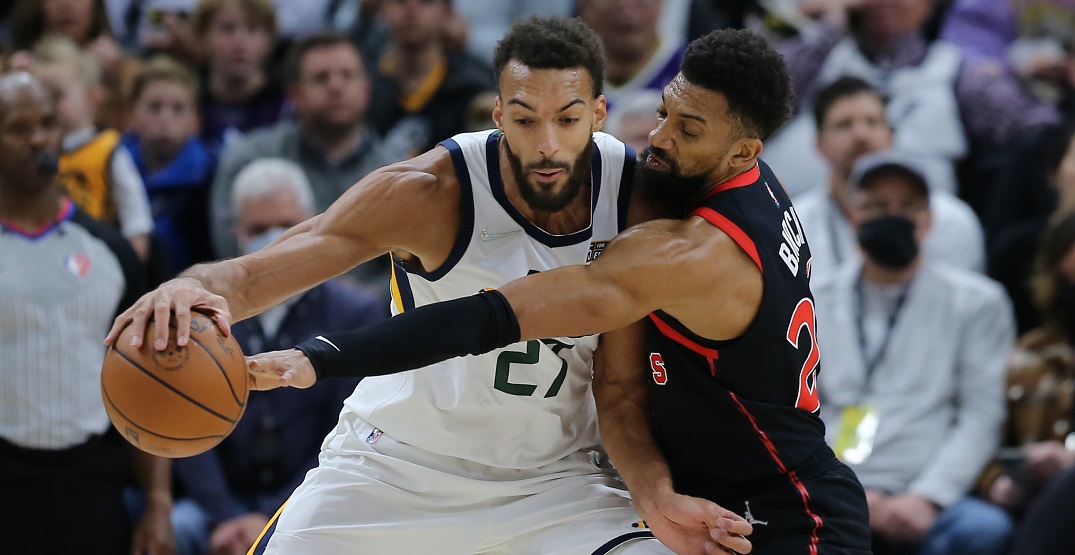 Is a Rudy Gobert trade with the Toronto Raptors and Utah Jazz on the horizon? Well, depends on who you ask.

Gobert’s name was linked to the Raptors in a report this past week as a possible suitor in a trade from NBA insider Ian Begley of SNY, as being one of the teams that would have a “degree of interest” in a trade with the Jazz.

The Jazz is currently stuck in what’s considered one of the worst places to be in sports: a solid regular season team but can’t quite make the push over the top.

Like the Raptors, they finished 5th in their conference this past season.

Unlike the Raptors, the Jazz has not made it to the Conference Finals since 2007. However, Gobert has led the Jazz in win-shares for seven of his nine seasons since being traded on draft night from Denver in 2013.

He’s been the best player in Utah for a while now, but the team hasn’t been able to get over the hump of regular postseason success in his tenure there.

Gobert has four years left (with a player option in the final year) on a five-year, $205 million contract that will see him make $38.17 million next season.

Whether Gobert stays or leaves, this offseason is uncertain, but it’s worth examining whether he’d fit in with the Raptors and what the acquisition cost could potentially look like for Toronto.

What kind of player is Rudy Gobert?

At age 29 (he’ll be 30 next month), Gobert isn’t your traditional four-time All-Star. He actually finished fourth on the Jazz in scoring, putting up a respectable but not remarkable 15.6 points per game this past season.

But it’s on the defensive side of the ball where he really shines: picking up 14.7 rebounds and 2.1 blocks per game, which rank first and third in the league, respectively. Gobert is a three-time NBA Defensive Player of the Year.

It’s easy to imagine Gobert thriving under Raptors coach Nick Nurse, who is known for his defensive creativity. The Raptors didn’t really employ a traditional center this season (or a player over 6’9″), so having Gobert around could give them a new layer to the team’s defence.

There’s the silly proposals. One Jazz fan on Reddit suggested this offer: Gobert for Pascal Siakam and Scottie Barnes.

What do you say Raptors fans? 😂 pic.twitter.com/eRpkfLAGAA

Sure, on paper, maybe trading Siakam for Gobert would work from a contractual standpoint, as Siakam makes just under $3 million less than Gobert. But adding in Barnes makes the trade go from “well, we can think about it” to the “no-chance-in-hell” territory.

It might be a joke, it might be serious, but either way, there is pretty much a less than zero chance the Raptors would trade both their best player this past season and the reigning rookie of the year for Gobert.

Assuming the Barnes/Siakam combination is off the table (and more likely than not, each of them individually), that leaves three players left in the Raptors’ ideal starting lineup to choose from.

VanVleet made the All-Star game for the first time himself this past season, while Trent and Anunoby both had strong building seasons (though the latter played just 48 games while dealing with a litany of injuries).

VanVleet makes $21.5 million next season, while Anunoby makes 17.3 and Trent Jr. 17.2. Add those up, and you get somewhere between $34-38 million, in the range of one Rudy Gobert contract.

Losing any or all of those players would be a big dent for Toronto, but you have to give to get in the modern NBA. If the Raptors were to part with roster players for Gobert, two of those three would seem like the most sensible move from a contract perspective. Whether you agree with it emotionally or logistically is a whole different idea.

Raptors Report on Twitter offered up a third idea: trade one starter and a whole bunch of bench talent.

In this particular hypothetical, the Raptors would move on from VanVleet, while also packaging in Khem Birch, Sviatoslav Mykhailiuk, and Malachi Flynn.

There is a narrative that I have heard that the Raptors would be unable to trade for Rudy Gobert without trading either Siakam or two of FVV/OG/GTJ. This isn’t true. The following trade is literally just to show that the Raptors could make a trade work outside that framework. pic.twitter.com/j1Kuz0VnKJ

Would this one make sense for Utah? Well, maybe if they really believe in Flynn, who had an up-and-down second season with Toronto. Otherwise, they’d be trading for one All-Star in VanVleet, and the 9th (Birch), 10th (Flynn), and 15th most used players in the Raptors’ playoff rotation.

With the playoffs in full swing, we’re still a few months out from any trade going down. Until then, let those rumours carry you through what should be another interesting NBA offseason.