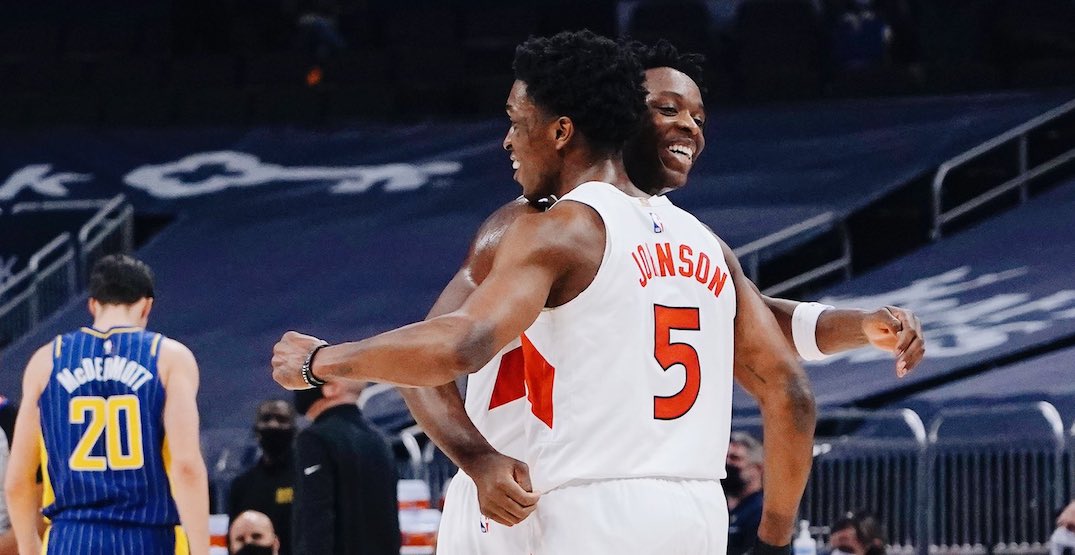 The Toronto Raptors are getting a lot of help from some unexpected sources this season.

Toronto defeated the Indiana Pacers 107-102 last night and with Kyle Lowry and Pascal Siakam out of the game due to injury, other players needed to step up, and they did.

With the departure of a large part of that 2019 championship core, the onus is on some new players or former bench-warmers to take on the challenge and keep up the winning culture the team has crafted.

While the season did not start the way the Raptors would have liked, they appear to be flipping the script, by getting production from unexpected talent.

Here is a list of players that are stepping up this season:

Yuta Watanabe is a former member of the Memphis Grizzlies where he spent his first two years of his NBA career, playing only 33 games. He wound up coming to the Raptors training camp and earned himself a two-way contract with the team.

While his overall numbers do not impress — only 1.4 points, 2.9 rebounds, and 0.4 assists per game — Watanabe has made it into this list by helping out the team through his hustle plays.

“The kid is playing so hard… He’s a guy that gives you maximum energy every time he’s on the floor,” Kyle Lowry told TSN’s Josh Lewenberg after a game against the Charlotte Hornets on January 14. “He’s going to give you everything he’s got… He just plays with an extreme hardness.”

Yesterday’s game against the Pacers saw him get a career-high in minutes played with 21. Those hustle plays keep him on the court, and the coaching staff is rewarding Watanabe for that hustle and toughness.

Stanley Johnson has been balling recently, and it shows the most on the defensive end.

Coming into this season, Johnson was out of the rotation. He was only getting six minutes per game and played only 25 games. Now he is in almost every game and is getting top assignments on defence.

In his previous eight games, Johnson has gotten either a steal or a block. Against the Pacers, he was forced to guard former All-Star Domantas Sabonis and did a great job. He held him to only 10 points on 10% shooting, that point total was a season-low for Sabonis.

In a game against the Dallas Mavericks, he was the one who had the assignment of guarding one of the best players in the league in Luka Doncic. He held him to just 15 points on 36% shooting.

“If anybody watched last year with me trying to figure out the system, it was pretty bad,” Johnson said after a game against the Mavericks. “I feel like I’m just getting it to where I can do it at a consistent level.”

Chris Boucher has been getting praise from various sources, so it is only fair to give him some more on this list.

He re-signed with the team for a two-year deal worth around $6.75M per year. That deal looks fantastic in comparison with his production this season.

The 28-year-old is averaging 14.8 points and 6.5 rebounds on 48.3% shooting from behind the three-point line, in only 23.5 minutes per game. He is not even starting yet, so he has the chance to become even better. His 7-foot-4 wingspan has been destructive defensively, which is the biggest key in why he is top five in blocks in the league with 2.3.

Boucher has become a reliable player on this Raptors team and is the anchor at the centre position.

While Anunoby has been a consistent cog in the Raptors machine for a couple of seasons now, he has started to elevate his play to a new level this year.

Anunoby has averaged over 34 minutes a game since new year’s and has played fantastic at both ends of the court.

When the team signed Anunoby to a new contract worth $72 million, they were looking to see his continued progression to become what Siakam is as an All-Star and top scorer. For this season, so far, so good.