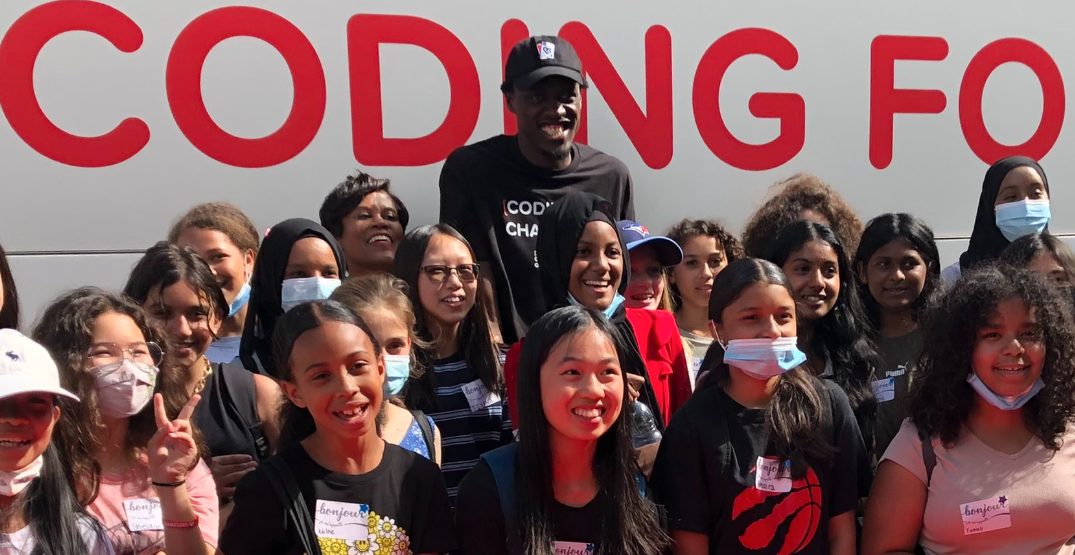 Toronto Raptors forward Pascal Siakam could be anywhere in the world in the midst of the NBA offseason, but he spent Tuesday right in the heart of the city.

Taking place at Regent Park’s Dixon Hall community hub, the Raptors star was part of his third “Coding for Champions” event run in collaboration his own Pascal Siakam Foundation, Penny Appeal Canada, handing out 150 laptops to girls 12-14 in order to help jumpstart their interest in the technological world.

“It’s easy to do those things when you feel connected, the people are awesome,” Siakam said.

In his sixth NBA season, all with the Raptors, Siakam was named to the All-NBA team for a second time.

In addition to the 150-or-so recipients, hundreds more parents and interested onlookers came out to get a glimpse at Siakam.

“I think that having the support of all these people means everything to me, and makes it worth it,” Siakam said. “I feel really connected to the city.”

Several hundred people were out in Regent Park today to catch a glimpse of #Raptors forward Pascal Siakam as he was handing out 150 laptops as part of the Coding for Champions program.

🗣: “Having the support of all these people means everything to me and it makes it worth it.” pic.twitter.com/DzDM3csigN

Siakam’s teammate Fred VanVleet was named a recent nominee for the NBA’s Social Justice Award, which Siakam said has inspired him in turn.

“He’s definitely someone that you can look up to and know that he does awesome things,” Siakam said. “If I can do half of that, I’m okay with that.”

Siakam spoke about his impetus for the event, which included combatting the digital divide in many Toronto communities where access to technology may be limited, as well as looking to increase gender equity in the coding space.

Joining Siakam to hand out the laptops was Marci Ien, who serves as the MP for Toronto Centre as well as the minister for women and gender equality and youth.

Must’ve been a good joke. pic.twitter.com/HLbAWx15aP

“He’s here and wanting to do this because he knows it’ll make a difference,” Ien said in an interview with Daily Hive. “We know that the drop off happens around that age, where girls in particular do not take science anymore. They may not be in sports anymore, because you start to choose we have selective of high school. So if you can get girls at this age coding, and building that skill set and being involved in science, chances are they’re going to keep it.”

A longtime season ticket holder of the Raptors, Ien said it’s important for the youth to have a role model like Siakam.

“You’re going to dream big,” she said. “You need to see people doing what you may be aspire to be because so many kids don’t understand that they can achieve certain things because they don’t have those examples maybe around them.”