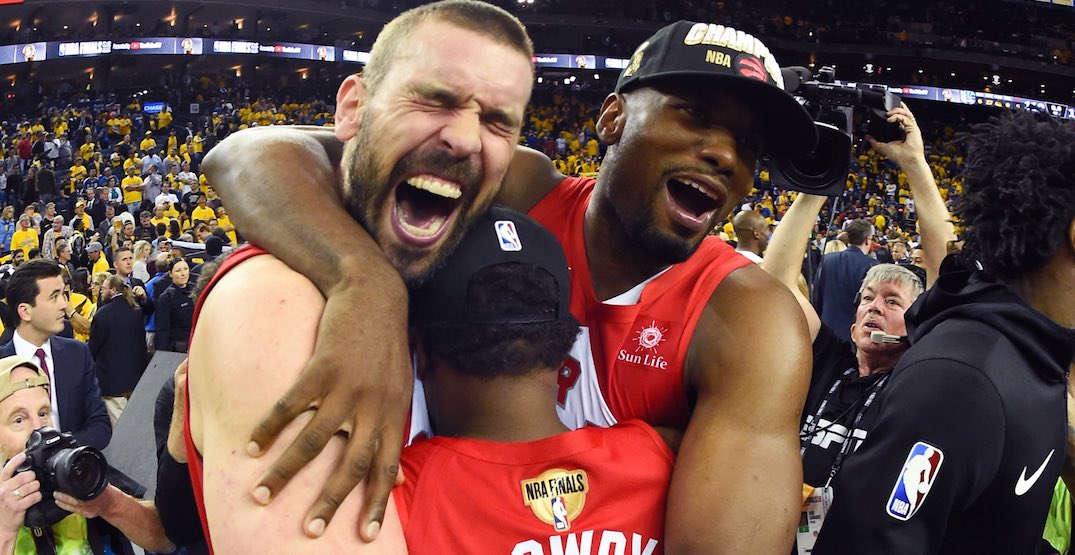 After a half-decade of being among the NBA’s elite, the Toronto Raptors are now 1-6.

What started off as a slow start escalated quickly into a free-fall, and a team that had earned a reputation for being able to close out any opponent is now looking like nothing more than the league’s proverbial punching bag.

Last year’s 15-50 Golden State Warriors are a prime example of how quickly an elite NBA franchise — even one that’s considered a modern dynasty —  can fall apart. After what was the team’s best regular season win percentage in history last year, the Raptors are in dangerous territory right now to miss the playoffs for the first time since 2013.

While it’s not too late to turn things around, it’s also a bit past the point where it’s easy to start shrugging off a string of defeats.

And more than anything, a front-court shakeup following the loss in free agency of both Serge Ibaka (to the L.A. Clippers) and Marc Gasol (to the L.A. Lakers)  in a pair of two-year deals has caused the Raptors some very real problems at the centre position.

It’s hard to really lay too much blame for these personnel losses on a front office combination of Bobby Webster and Masai Ujiri, who have rarely swung and missed in their time together. But let’s look at what happened, what’s going on with their current roster, and how the Raptors can at least try to fix it.

Ibaka and Gasol’s seasons so far

Since leaving Toronto for a shared home at L.A.’s Staples Center,  Ibaka has found work as a full-time starter with the Clippers, while Gasol has done the same with the Lakers.

Heading into last night’s action, both had actually seen a drop off in minutes from their time in Toronto, but it’s early days yet. And with their teams both sitting in the top-three of the NBA’s Western Conference, it’s likely they’re being used less than they would be if the teams were in close matchups night in and night out. Gasol hasn’t found his scoring touch yet, averaging only 4.1 points a night.

However, they’re both pieces the Raptors could’ve used, and would’ve likely gladly re-signed either for a one-year deal. But life in Los Angeles provided a bit of security for two guys in their mid-30s who’d already established, so both departures are understandable, even if they are disappointing.

The signing of veteran free agent centre Aron Baynes has been Toronto’s best attempt to answer to the Gasol and Ibaka departures.

Last week, I wrote about the trouble that Baynes had experienced in his first few games in Toronto. It’s gotten worse with Baynes unable to make a single basket in either of his last two starts.

He hasn’t picked up more than five rebounds in any of his last four games, and has been reduced to under 15 minutes a night in three of the Raptors games so far. If you’re into fancy stats, he’s at a negative 0.1 win shares so far this season: not overly detrimental to the team so far, but hard to say he’s fit in well either.

Signing on the same day that Gasol left (and one day before Ibaka officially signed), there weren’t too many other choices league wide with his resume that could’ve slotted into a contending roster.

The issue? He hasn’t figured it out yet, and if he doesn’t, there’s not really much the Raptors can do to turn things around quickly.

Chris Boucher has as inspirational a story as you’ll get in the NBA these days. Formerly a couch-surfing teenager trying to find a stable place to live in Montreal, the Oregon Duck standout has worked himself into a reliable contributor on the Raptors over the past few seasons.

Averaging 12.1 points a night (to Baynes’ 5.3), his ability to turn it on offensively has been evidenced so far by his 22 and 24 point nights so far this year off the bench against San Antonio and New Orleans, respectively.

The 27-year-old’s ability to close out defenders with an emphatic block never really goes unnoticed, and he’s the kind of player who brings out something special seemingly every time he’s subbed in.

For me, it’s pretty simple what the next thing to try is.

Start Boucher, a player who’s more than earned his dues in this organization but yet to pick up a single start in the NBA, and force the underperforming Baynes to prove his worth in the lineup.

It can’t, or at least it shouldn’t, get much worse than it is right now in the Raptors front-court. Change can be scary, but after one move in Baynes that hasn’t worked out so far, Boucher could be the answer to an ailing Toronto squad.