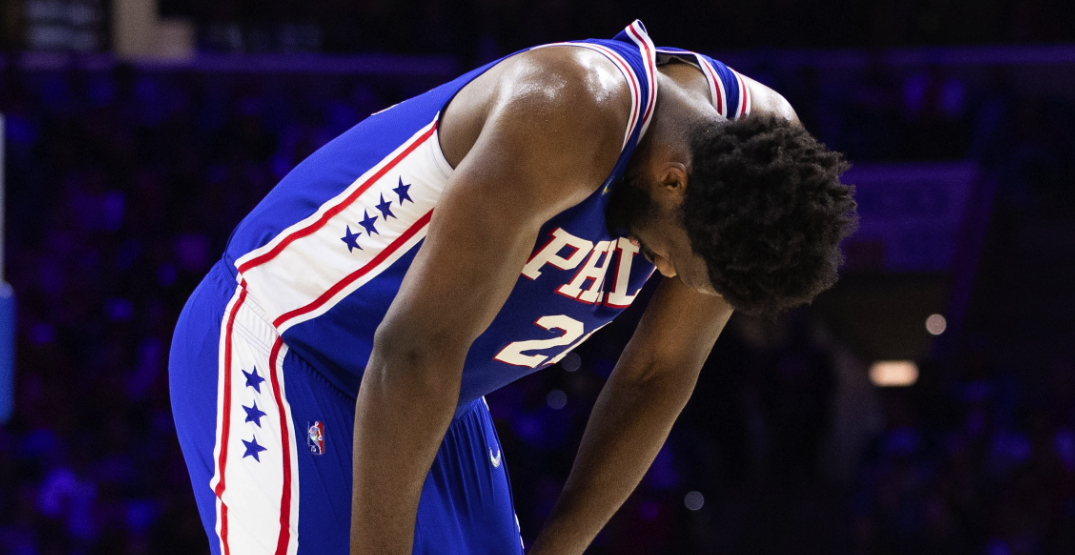 Joel Embiid might be fighting it a little bit.

No, not the referees in the series between the Philadelphia 76ers and Toronto Raptors.

The MVP finalist, Embiid, is playing through a torn thumb ligament that will require surgery in the offseason, and it’s starting to show slightly, according to 76ers coach Doc Rivers.

“I don’t even know. I thought he was okay,” Rivers said. “The only time I saw it, it was a loose ball that he clearly could’ve got. I think it was in the second quarter that he didn’t reach for. I get that. You just got to live with stuff like that. You really do. Those are the ones that he’ll probably later grab, but right now, he’s probably concerned by it.”

Doc Rivers on a moment where he thought Joel Embiid held up on a loose ball:

“I get that… you’ve just got to live with stuff like that. You really do. Those are the ones that he’ll probably later grab, but right now he’s probably concerned by it.” pic.twitter.com/fFy1kFjMPE

Embiid has scored a combined 41 points in Games 4 and 5.

“The thing that I’m really affected is I think I’m in a situation where I try to protect it,” Embiid told reporters postgame about his thumb. “Before I even attack or before I get the ball, I’m not playing freely where I’m like, ‘if I do this, I might get hit, or I might get hurt.’ I think mentally, I just have to get out of that and hope for the best and be myself and not think about which move can put me in a bad position to get hit or get hurt even more. I’ll work on it.”

Embiid notched a double-double for Philadelphia in the 76ers’ Game 5 loss, with a team-high 20 points on 7-for-15 shooting and a game-high 11 rebounds. He played 40 minutes, right around his series average, and was 0-for-4 from three-point range.

“I thought he played the right way overall,” Rivers said. “I thought he made great passes off the elbow. Guys got great shots in that. That was our best action tonight, was Joel passing from the elbow and then Joel rolling. We’ve got to get him down on the post a little bit more, though.”

They’ve dropped two straight after jumping to a 3-0 series lead.

No team has rallied from such a deficit, but several have come back from 3-1 — including three teams against Rivers.

Doc Rivers has now lost 7 of his last 8 opportunities to close out a series.

His 31 such losses in those games are already the most by a coach in NBA history. pic.twitter.com/YE8gXzDOMq

“There’s a reason we won three games in a row,” Embiid said. “Offensively, clearly, we haven’t been ourselves. That’s really been the reason why we gave up these last two games. We’ve just got to be better.”