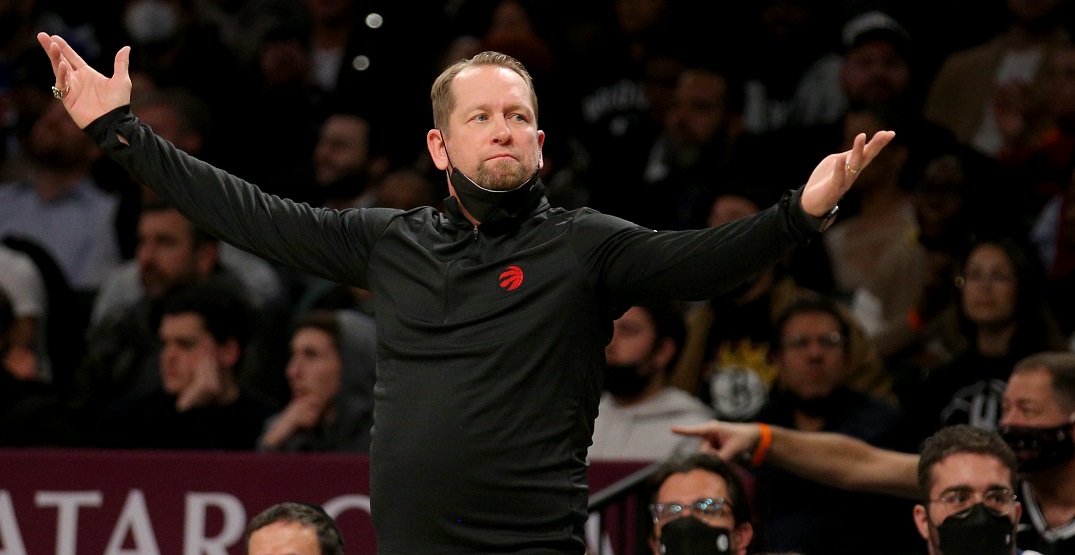 On a night that should’ve been an exciting matchup between the Toronto Raptors and Brooklyn Nets, it was hard to think about much else than a COVID-19 outbreak spreading further.

With seven players put into NBA COVID-19 protocols in the 24 hours before tip-off, the Nets had just eight players available for them before taking on the Raptors. Less than an hour to tip-off, Nets players James Harden and Bruce Brown were added to the protocol list, questioning whether the game would go ahead.

It did, eventually, with a shorthanded Nets team coming out on top by a 131-129 score in overtime.

The Raptors currently have just one player in COVID-19 protocols — Precious Achiuwa, who tested negative and is expected to return later this week — but the presence of COVID is seeping into their organization once again.

Their game against the Bulls tomorrow has already been postponed, while crucial figures: President Masai Ujiri (who tested positive), superfan Nav Bhatia, and broadcasters Jack Armstrong and Matt Devlin have been self-isolating due to close contact exposure.

There have been a lot of moments over the last two years that have made fans wonder why the league went ahead with a given game. The Raptors are hoping playing the Nets isn’t one of them.

“Cross our fingers, hope they get no more positive tests, and we don’t, either,” Raptors head coach Nick Nurse said following the game.

But once they got the green light, the players just went ahead and played.

“I feel like it’s kinda the norm now; you never know who’s gonna play or not, just wake up in the morning, and someone’s in safety protocols,” said Pascal Siakam. “I think you just gotta continue to hopefully stay safe and, again, we wanna continue to play basketball. Obviously, with the news, it was a bit all over the place, but we were just ready to play.”

Thirty-six players are currently in the NBA’s protocols, including New York Knicks RJ Barrett and Obi Toppin. They entered protocols one day after playing the Raptors in Toronto last Friday.

From a game standpoint, there was a lot to like: four Raptors players (Scottie Barnes, Gary Trent Jr., Siakam, and Fred VanVleet) put up 23 points or more, with VanVleet leading the way with 31 points.

VanVleet had a chance to win the game on the Raptors’ final possession of regulation but couldn’t stick the landing on a potential winning shot that air-balled past the basket.

Playing 48 minutes, Kevin Durant did Kevin Durant things, putting up 34 points, 13 rebounds, and 11 assists while leading the Nets to the win.

On paper, it was a tight loss against the top team against the Eastern Conference’s top team on the road. Using any semblance of context, the impending results of the game will likely come out in the days following based on whether the Raptors were, in fact, able to escape with their players healthy.

As of now, the Raptors are to host Golden State on Saturday night at Scotiabank Arena.