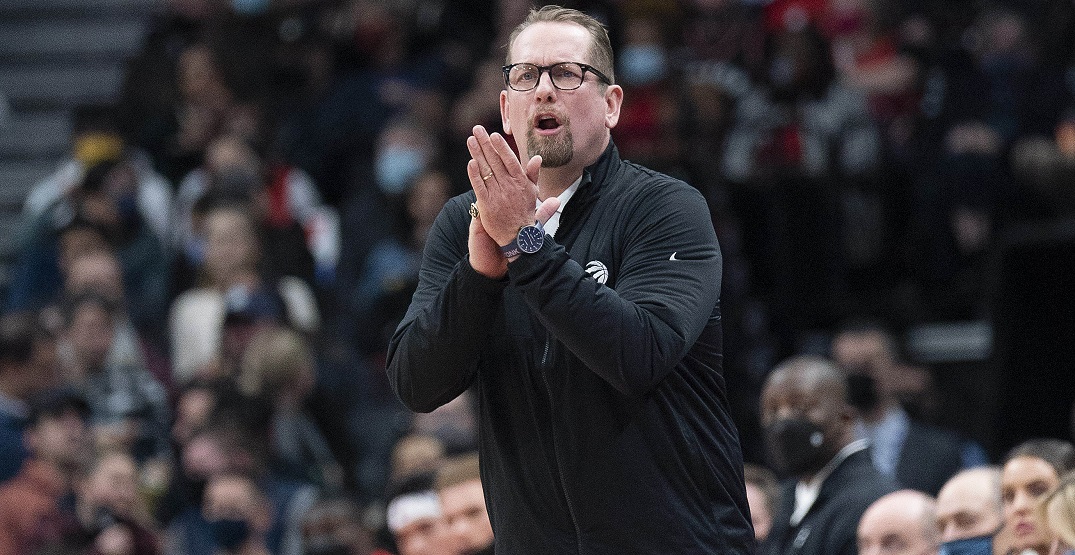 Nick Nurse to the Los Angeles Lakers? Get real.

The Lakers went through a hellish campaign, missing out on the NBA’s postseason altogether and are going to finish 11th in the Western Conference.

Multiple reports have suggested head coach Frank Vogel is on his way out the door, just two seasons removed from an NBA championship with the team in 2020.

Heavy.com’s Sean Deveney reported that “one Eastern Conference executive” believes the Lakers will push to sign the Raptors head coach Nurse as the team’s next boss this offseason.

Nurse is represented by Klutch Sports, the same agency that represents LeBron James and Anthony Davis.

But Raptors fans weren’t buying the rumour at all though, shooting it down in the replies to a tweet from @TheNBACentral.

They not getting him lmfaoooo

LMFAOOOOO THEY BEING DELUSIONAL ABOUT COACHES NOW?

In Masai we trust.

Yea y’all not getting him 😭

Lakers? Nope. Look at how they treated Gasol.

Well they ain’t getting him😂 pic.twitter.com/ZoFgCwGAcL

Nurse has a record of 186-121 in his coaching career with the Raptors, including winning NBA coach of the year honours in the 2019-20 season.

Entertaining the rumour for a second, let’s break down three quick reasons why it wouldn’t make much sense for Nurse to take the Lakers’ job.

“[The Raptors] are not going to let him go,” the executive conceded to Deveney. “But it makes him look better and Klutch look better if they are asking for him, right? So yeah, I would not be surprised to see the Lakers ask about him but more as a favor to Klutch. Maybe they won’t because he is so far out of reach. But, you scratch my back, I’ll scratch yours, that is how things work.”

Nurse to the Lakers doesn’t make much sense at all, even if they do make any sort of approach to him.