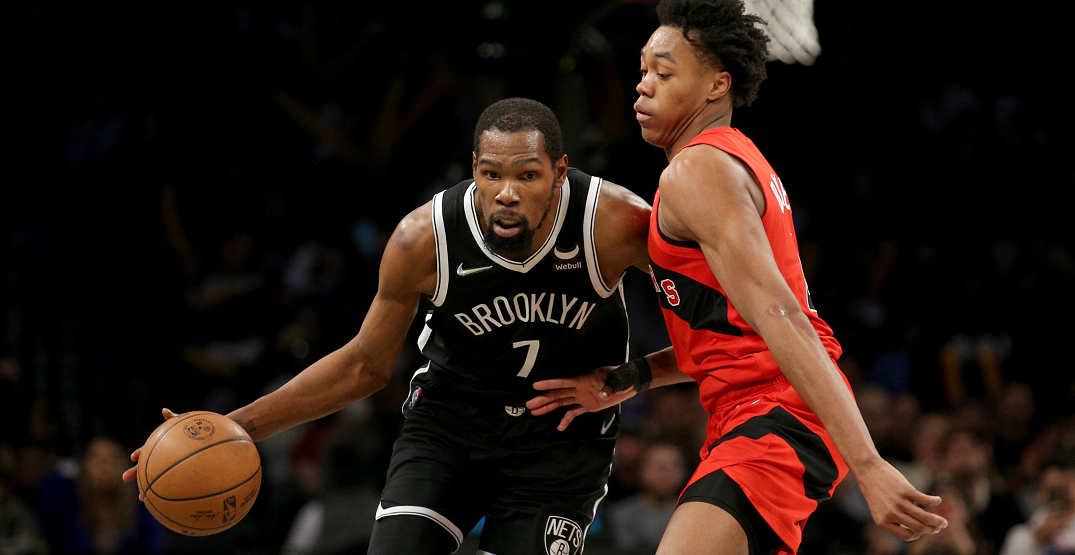 Kevin Durant to the Toronto Raptors?

Well, it depends who you believe.

Durant has a gargantuan contract: four years left at a total of $ 189 million, which carries him through to the 2026 season. He’s a surefire future Hall of Famer, but he’s already 15 seasons deep into his NBA career. Durant has shown us time and time again that it’s never wise to count him out, as he finished tied for 10th in MVP voting just this past season.

Despite him being in the latter half of his NBA career, that doesn’t mean the Raptors couldn’t put together a pretty great trade proposal for them if they wanted, with the Brooklyn Nets star seeing his name pop up in trade rumours over the past few weeks.

ESPN’s Zach Lowe mentioned on last Friday’s edition of his The Lowe Post podcast what he’d do as the Nets general manager if he had to move Durant: call Toronto and ask for 2021-22 Rookie of the Year Scottie Barnes in exchange for Durant. Lowe added he thinks Toronto would say no to that offer.

With Durant’s salary at $44 million next season, Toronto would have to add in another highly-paid player or two to make the salaries match: any of Gary Trent Jr., OG Anuoby, Pascal Siakam, and or Fred VanVleet.

Any sort of Durant trade can only be described as “franchise-altering,” and you better believe parting ways with Scottie Barnes would be as such.

TheScore‘s Esfandiar Baraheni brought the quote to Twitter, with Raptors fans having a field day with it.

Zach Lowe said that if he was the Nets and he had to trade KD — his first call would be to the Raptors for Scottie Barnes.

Says Raptors would say no but you gotta make the call.

Doesn’t make a lot of sense for Raptors. Scottie has a high ceiling and I feel like the raptors aren’t going to try and contend next year. Makes sense for the Nets to atleast call fs though, but tbh I doubt Kd would even wanna go there. https://t.co/5ETFBcm5Nm

I would trade Scottie for for KD 100x. No disrespect to Barnes but…we gave up Demar for Kawhi. This is a much better move. Raptors fans are the weirdest in the NBA smh. https://t.co/05GEDt3fEd

The conversation hasn’t died down the past few days either.

KD & Raptors twitter would be amazing! Need it to happen for the toxicity it would create against the rest of NBA twitter

KD is a Raptor and has been for weeks.

As for the betting markets? Oddschecker.com doesn’t have Toronto as a top-seven option for Durant, with the Miami Heat being the leading contender. It doesn’t seem all that likely, but it’s still at least much more possible than it seemed a few weeks ago.

How’d we get here?

It’s hard to describe the current state of the Brooklyn Nets. If you had to pick one word, it would probably be “failure.”

Durant was his usual self this season, making his 12th All-Star game while averaging 29.9 points per game.

But the same couldn’t really be said about his teammates.

Kyrie Irving played just 29 games this season, after a lengthy standoff due to his refusal of the COVID-19 vaccine that prevented him from suiting up in home games until March due to New York City’s private sector laws.

Ben Simmons didn’t play at all this season after being traded from Philadelphia in exchange for James Harden, dealing with multiple injuries and off-court issues. And today, New York Daily News writer Kristian Winfield reported Monday that Irving has been granted permission to seek a sign-and-trade deal.

And of course, the Nets were swept out of the first round of the NBA playoffs by eventual Eastern Conference winners the Boston Celtics. For a team that came into last season as NBA title contenders, there’s definitely, well, room to grow.

The most notable incident with Durant and Toronto fans was during his Achilles injury suffered in the 2019 NBA Finals at Scotiabank Arena while playing for Golden State, which put him out of action for the entire 2019-20 season. Some of the Toronto fans cheered when Durant went down, which is a point you’ll still find brought up to this day.

This past November, he said Toronto had a “unique” fanbase, also saying he was expecting the crowd to be “ridiculous.”

Twitter user @enra6ed shared a video of Durant’s praise for the Raptors organization and the city of Toronto throughout the years.

Back in 2014, Durant visited Toronto in the summer as part of Drake’s OVO Fest concert. Drake suggested to the crowd to give an ovation to Durant to see what it would be like if he’d play for the Raptors. As an official global ambassador of the Raptors, Drake was actually fined $25,000 for the ordeal.

Durant has also dropped 51 points on two separate occasions in Toronto: once with Oklahoma City and once with Golden State.

Safe to say, there’s a history there. It’s just a bit of an odd one.

Raptors 2022 second-round draft pick Christian Koloko said last week that his favourite player growing up was Kevin Durant and that is the reason he wears #35. Having worn #35 in Seattle, Oklahoma City, and Golden State, Durant wears #7 in Brooklyn, which is likely to be soon retired for Kyle Lowry.

So if Koloko is wearing #35 and #7 is effectively retired, what number will KD be wearing for the Raptors?