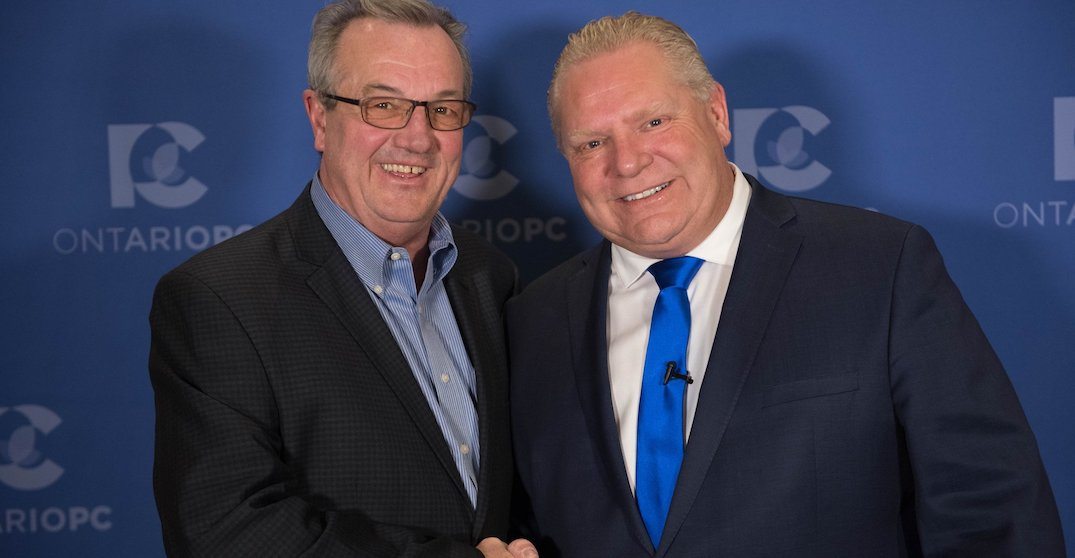 Hillier with Doug Ford in 2018 (randyhillier/Twitter)

Randy Hillier was recently removed from the PC Caucus, and the Lanark-Frontenac-Kingston MPP has written a three page open letter alleging that it was due to “outrageous demands” from the Ford government.

In the days following his removal, “Reinstate Your Local Representative – Randy Hillier” was set up online, with Hillier explaining his suspension.

“As I am sure you are aware, I was recently removed from the PC Caucus, although the Party used the term ‘suspension’ to describe my removal,” he wrote. “Unfortunately the truth in politics can be difficult to discern, as it is often camouflaged with spin and word-smithing to craft a preferred narrative, rather than the truth. The truth behind my removal, however, is not due to banter in the house, but long-standing tensions between me and Doug Ford’s most senior advisors (Dean French and Chris Froggatt) over what is expected of MPPs in the PC Caucus.”

In his new open letter, Hillier said that the last few weeks have reinforced his convictions with the support demonstrating his constituents’ shared belief in “freedom, justice and democracy.”

And once again, he alleges that tensions with Ford’s government pushed his exit.

“It has become clear that the backroom operatives took advantage of many of the newly elected members who, not being as well informed of parliamentary practices, rights privileges, or conventions, were taken advantage of by Dean French and Chris Froggatt.”

Hillier said that during his first private meeting with French after the June election, he was informed that French wanted him out of caucus.

He said he was expelled from caucus for several reasons, including his refusal to obtain permission to speak with media, his refusal to accept the “obstruction and prevention of caucus criticism or input on public policy,” as well as his refusal to stand and applaud for the routine, “only outstanding performance out to be recognized as such, or applause has no meaning.”

“These outrageous demands and distortions/corruption of my responsibilities culminated with the following condition of reinstatement to the PC caucus,” said Hillier. “Even when the government is in violation of the law or engaged in unlawful activity, I must accept these decisions as a team member and neither dissent in caucus nor speak publicly of these illegal/unlawful actions.”

Hillier signed his letter as his “conservative, independent, Member for Lanark-Frontenac-Kingston.”

Neither Ford, nor the Ontario PC Party, have commented on Hillier’s letter.

An Open Letter to my Constituents and the People of Ontario. 1/3 #onpoli pic.twitter.com/df5xkta7Pq