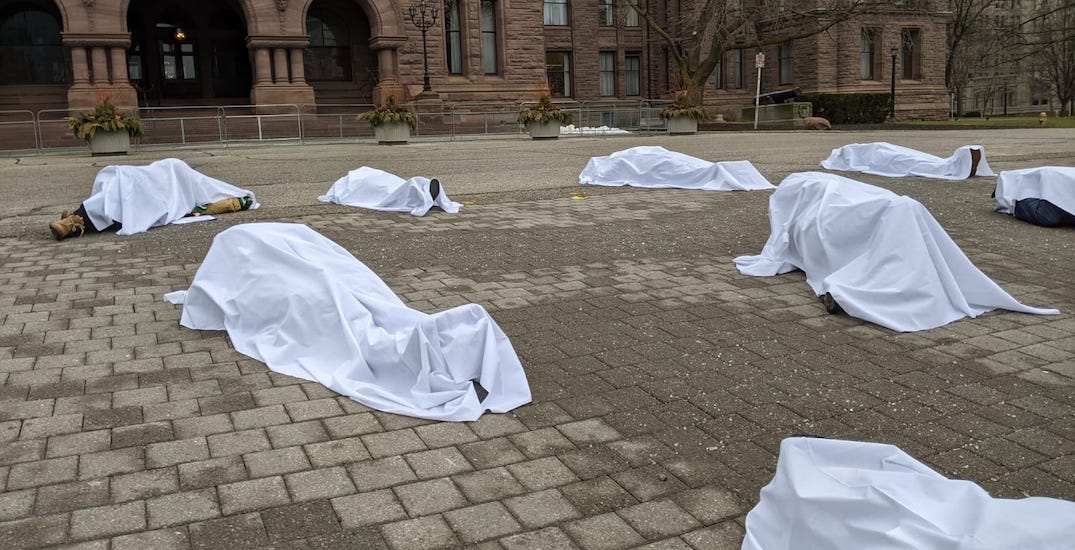 Healthcare and frontline workers protested outside Queen’s Park on Wednesday, after additional paid sick days were not included in the latest COVID-19 announcements.

“When workers wake up & they’re not feeling well they have to make a decision – whether to go to work, get on a bus, get a test, or stay home,” said Deena Ladd, executive director of the Workers’ Action Centre, via Twitter. “They need to know they’ll have immediate access to income so they won’t have to worry about making rent.”

Protesters were seen holding signs and also staging a “die-in.”

PSWs risk their lives every day without #paidsickdays. Warehouse workers, grocery workers, health providers put their lives on the line. And we are dying.

How many more lives need to be lost before @PremierFord finally takes action?#PaidSickDaysSaveLives #Covid19 #OnPoli pic.twitter.com/wHGiW2TmV1

Workers need #PaidSickDays that cover the full cost of missed work, are accessible right away & enforced under ON labour laws. @fordnation, how many more deaths till you take medical experts’ advice?

Toronto’s Chief Medical Officer of Health, Dr. Eileen de Villa, also urged the province to provide financial support to employers in order to give at least 10 paid sick days each year, as it is essential to protect the health of workers, their workplaces, and the community.

The Decent Work and Health Network also released a report highlighting that 58% of workers in Canada, as well as over 70% of workers making less than $25,000, have no access to paid sick days.

At the moment, the federal government offers the Canada Recovery Sickness Benefit, which pays $500 per week for up to two weeks for those who must quarantine due to COVID-19, which in turn is meant to help employees who are not offered sick leave at work.