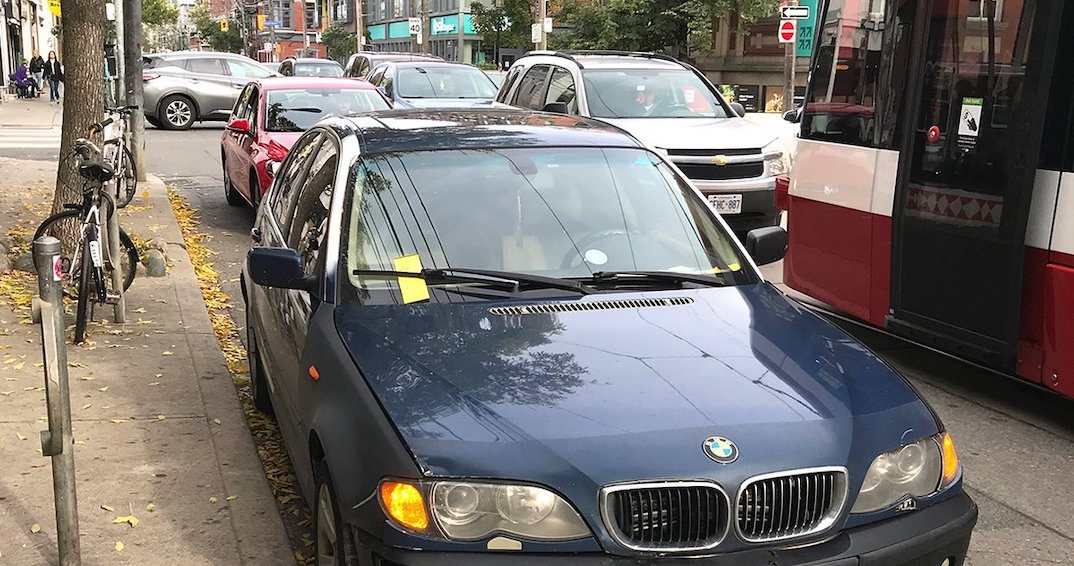 The pilot, which began on October 7, will run six to eight weeks during the afternoon rush hour and will take place between Fallingbrook Road (to the east) and Roncesvalles Avenue (to the west).

When the city released the initial information, it said that drivers of vehicles that are relocated/towed from Queen Street during the pilot period will receive a parking violation notice, but the towing fee will be waived.

Did you know it can take a tow truck 90 minutes to tow a car to a @TorontoPolice pound and come back for more illegally parked cars? This idea could solve this and get traffic moving sooner. Learn more about the Queen Street Towing Pilot at https://t.co/LnN61AbAyG @311Toronto pic.twitter.com/xTeejsYtSF

According to City of Toronto’s Eric Holmes, the budget for the pilot is $80,000, and that is being used to offset the costs of towing/relocating vehicles to nearby streets, ” which supports the pilot effectiveness and ensures the necessary data will be collected to evaluate its success.”

Holmes confirmed that the budget is only for the pilot period.

If the project is made permanent on Queen Street, drivers will be paying both the parking/stopping violation, as well as the towing fee.

Additionally, if the pilot is successful, the city says staff and police would explore opportunities to run this program during morning and afternoon rush hour periods on other routes.

Police also said that many more vehicles would have been towed had it not being for the lengthy period it takes for tow trucks to show up and move vehicles to a police pound.

“What we anticipate is that this will be a far more efficient system in terms of moving vehicles that are blocking traffic,” said Supt. Scott Baptist of Traffic Services.

While it may improve traffic, residents are expressing concerns as to why the city is paying the towing fees.

“I don’t agree with city taxpayers footing the bill for towing illegally parked cars to ‘a side street.’ Law breakers should be paying for the tow and a fine for breaking the law,” said a resident in a tweet. “Hope you adjust that part, and make this program permanent. Law abiding taxpayers shouldn’t be paying.”

But why are tax $$ waiving the tow fees? I don’t think this is right 😞. Unless there’s another investment of 80k in the Queen Street transit corridor. @JohnTory

Ridiculous that taxpayers are on the hook for these tows and relocations, and the drivers who parked illegally get just a typical parking ticket. What a waste of money.

I dont agree with city taxpayers footing the bill for towing illegally parked cars to “a side street”. Law breakers should be paying for the tow and a fine for breaking the law. Hope you adjust that part, and make this program permanent. Law abiding taxpayers shouldn’t be paying

You waive towing fees and yet there is a fine of $450 for fare evasion on the TTC. Who in this city who is breaking a by-law is being hit the wallet ?

This just kills me. We’ll wrestle kids to the ground for skipping TTC fares but will tow illegally parked private vehicles FOR FREE. #zerovision pic.twitter.com/Q4Bi0tv4ZG

I can’t believe this is free. Ridiculous.