For the second time in two months, an Amber Alert issued in Ontario led to the discovery of a little girl who was reported missing.

While one of the girls was located safe and sound, unfortunately, the other incident ended tragically after 11-year-old Riya Rajkumar was found dead at her father’s residence in Brampton.

On Tuesday evening, an Amber Alert was issued after a 5-year-old girl was allegedly abducted by her father, 25-year-old Soloman Jaffri, from her classroom at Armadale Public School in Markham.

Initially, police said the father was not supposed to have access to the child.

However, as a direct result of the alert, police received a tip and the father and daughter were located in the area of Fairburn Drive.

At approximately 6:12 pm, York Regional Police confirmed the little girl was found in good health and Jaffri was then taken into custody but later released without charge.

CHILD FOUND: We have located 5-year-old Jannah Jaffri in good health. Her father has been taken into custody. Investigation is ongoing. Thank you to our community for your assistance in bringing Jannah home safely.

But even after the little girl was located, many residents continued to receive alerts on their phones and television screens, which led to residents flooding emergency lines to complain.

We are aware that some #AmberAlert messages keep going out on TVs across the province. @OPP_COMM_CR manages the system and are working to get the alerts cancelled. Your patience is appreciated. 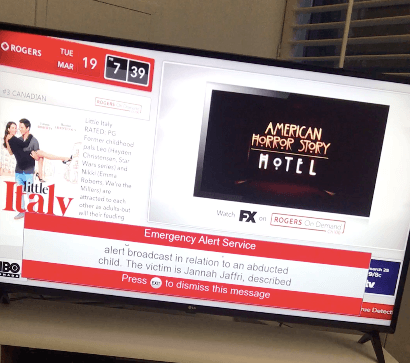 Amber Alert at 7:39 pm after missing girl was located

Despite the obvious importance of the alerts, police still have to remind the public not to call emergency lines to complain.

Toronto police spokeswoman Katrina Arrogante says 9-1-1 is for emergencies only and it should not be used for such complaints.

“Please keep our phone lines open by not calling 9-1-1 due to the alerts you may still be receiving,” said Arrogante.

please refer to https://t.co/447WPiFTbm regarding your concerns about the continued Amber alerts you are receiving. Thanks!@tpsoperations ^ka https://t.co/MSy8BJQ0Jr

Similar to last month’s issued alert, many residents are failing to understand the importance of an Amber Alert and continue to react poorly to it.

According to the Canadian Centre for Child Protection (CCFCP), an Amber Alert can only be activated by police agencies, and is only issued for the most dangerous child abduction cases, when time is of the essence.

An Amber Alert must also be issued “within a reasonable amount of time” from the moment of the abduction.