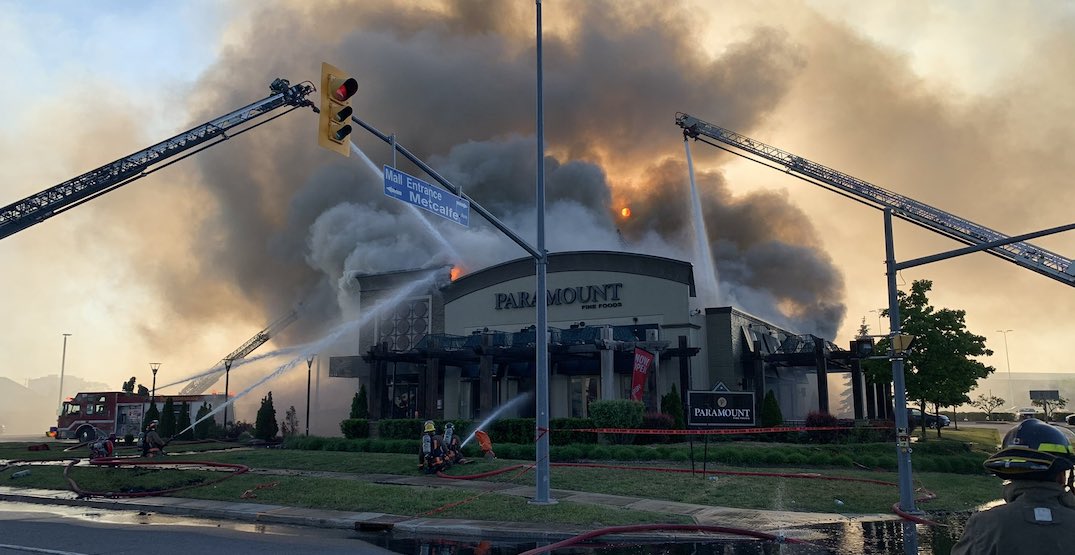 Mississauga Fire crews battled a massive blaze that broke out at a restaurant in the city on Sunday evening.

Fire crews were called out to Paramount Fine Foods in the area of Erin Mills Parkway and Eglinton Avenue West in the Erin Mills Town Centre, shortly after 6 pm, according to a tweet issued by Mississauga Fire.

Pictures and videos of the incident were shared on social media and huge clouds of heavy black smoke could be seen spewing out of the building.

According to Mississauga Fire Chief Deryn Rizzi, due to interior conditions, firefighters had to switch from an offensive strategy to a defensive one.

“Interior conditions became untenable – requiring firefighters to transition from an offensive to a defensive strategy using 4 aerial devices and a deck gun,” Rizzi said on Twitter. “A great effort by our Mississauga Fire and Emergency Services team.”

Fire can be seen bursting out from the roof of the restaurant while firefighters tried to tame the flames from all angles.

Yesterday afternoon #MississaugaFire responded to a structure fire at the Paramount Fine Foods. Below are some of the photos I took.

#Mississauga Fire on scene of a multiple alarm fire at Erin Mills Town Centre this evening.

No injuries were reported at this stubborn fire, crews will be on scene for quite some time here.@IAFF1212 pic.twitter.com/3X5T5lNrKJ

Mississauga Fire’s Acting Platoon Chief Graham Gold told CBC that restaurant staff were unaware of the fire until a passerby saw the flames on the roof and alerted them.

It later collapsed due to fire damage but there were no reported injuries, according to Gold.

In an email to Daily Hive, a City of Mississauga representative confirmed that the cause and origin of the fire is currently under investigation by an MFES Fire Investigator.

The Office of the Fire Marshal was notified since the fire was estimated to be over $500,000 in damages, according to the rep.