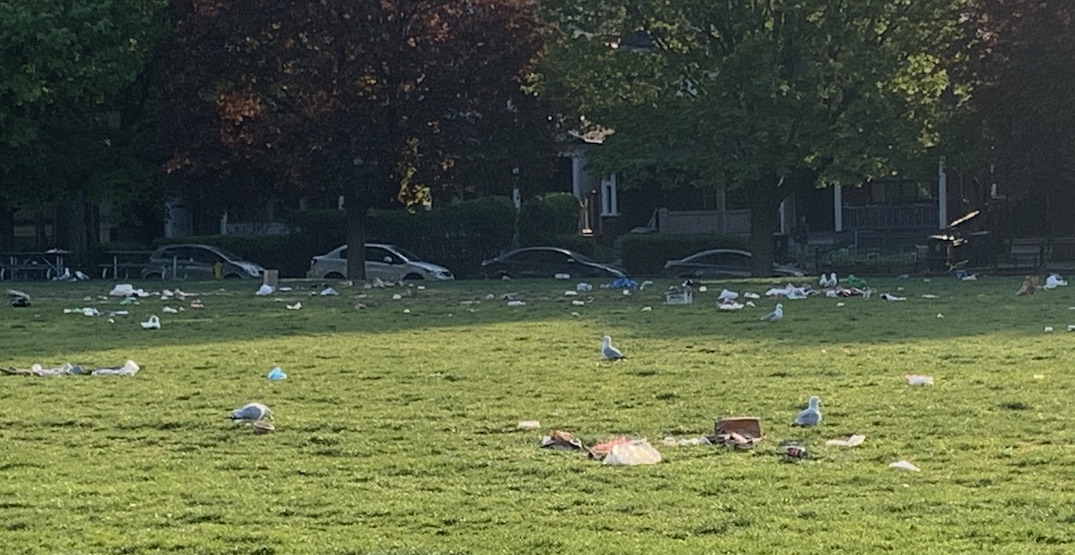 Trinity Bellwoods was once again left riddled with trash as hundreds flocked to the park to bask in the sun this weekend.

Toronto resident Joe Clement shared a video on Instagram of what was left over from Saturday’s gatherings at Trinity Bellwoods, Sunday morning.

“Every weekend morning @trinitybellwoodspark and by the sounds of it, many other parks in the city atm. What has happened to us?” Clement commented on Instagram. “This isn’t a one-and-done story. This is an escalating problem.”

Those who reacted to the video of how the park was left shared a similar sentiment and called it “disgraceful” and “shameful.”

Earlier this month, a City representative told Daily Hive that they would be adding more waste bins at Trinity Bellwoods after park-goers left heaps of trash scattered across the field a few weekends ago.

“The City is asking the public to do their part to help keep Toronto clean and safe by properly disposing items in [the] available street and park bins and not leaving items on the ground,” City of Toronto spokesperson Andrea Gonsalves said. “If a bin is full, people should look for another bin or bring their waste home for proper disposal.”

Some people have been showing their displeasure with the state of the park on social media through art. Artist Jake Tobin shared his perspective of the aftermath on Twitter.

Respect the white squirrel & clean up after yourselves. pic.twitter.com/FS3SkhJm3D

The Trinity Bellwoods gates are shown in the image and cups, bags, pizza boxes, and bottles can be seen scattered in front. A white squirrel is perched on top of one of the pillars with a speech bubble stating what many have commented in the past, “What disgusting animals…”

“Once again people left piles of trash in Trinity Bellwoods Park last night,” Tobin tweeted. “Respect the white squirrel and clean up after yourselves.”

Daily Hive has reached out to the City of Toronto for comment.