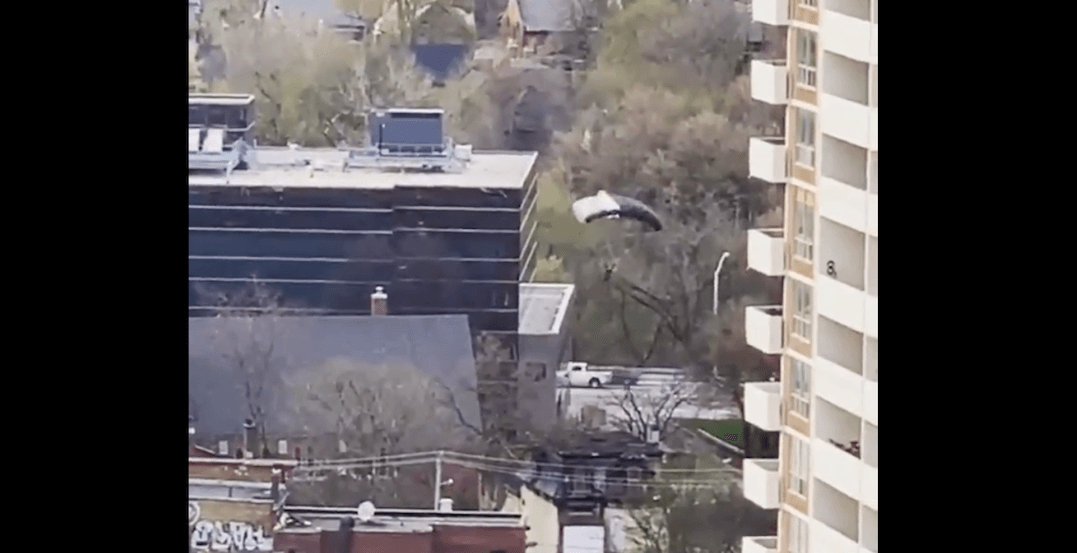 A parachutist was caught on video soaring over busy streets in Toronto this past weekend.

Twitter-user Erica Lewin uploaded the video to social media on May 4, mentioning that the sighting took place near the intersection of Bloor and Sherbourne.

But can someone explain to me why I just saw people parachuting into downtown Toronto? (sherbourne and bloor) #toronto pic.twitter.com/itxTgByGHs

Toronto Police later tweeted that they checked the address for “distressed parachuters,” but none were found.

According to the tweet, information gathered from those in the area suggests that the parachutist wasn’t injured.

While it doesn’t appear that anyone was hurt, police are still emphasizing that, like base jumping, parachuting shouldn’t be a thing in the city.

“The Toronto Police strongly discourages this type of activity within the city limits. With safety being a priority, we believe that despite an individual’s skill level, there is still potential for it to turn hazardous for the skydiver and possibly others,” a police spokesperson told Daily Hive.

“Additionally, using yesterday’s call as an example, resources which could be used elsewhere, have to be dispatched to a call such as this. We do not believe that seeking thrill or notoriety in this manner is worth risking your life or someone else’s,” the spokesperson said.

So if jumping out of planes with a floating device strapped to your back is your cup of tea, cool!

But consider taking that hobby away from the high-rises of downtown Toronto.