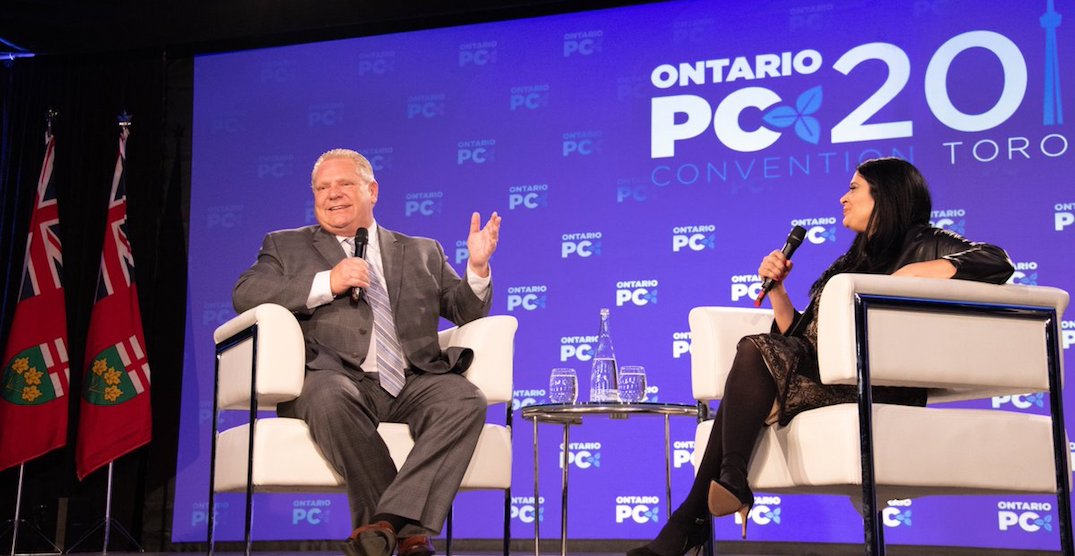 Ford at the Ontario PC Convention this weekend (FordNation/Twitter)

The Ontario PCs have passed a resolution to debate gender identity.

Policy Resolution R4, which passed at the Ontario PC Convention on Saturday, was introduced by Tanya Granic Allen and states that the “gender identity theory” should be removed from schools and curriculums.

The move sparked debate as parties criticized the PCs actions.

Former Premier, and Ontario Liberal Education Critic Kathleen Wynne called the resolution a direct endorsement of discrimination, and said that students deserve the right to go to schools in “safe and inclusive” environments.

“It is dangerous, reckless, and irresponsible for a party to endorse discrimination and tell people that how they identify themselves is not real,” she said.

Shocked that Doug Ford's PC Party would pass such a hateful resolution. It is dangerous, reckless and irresponsible for a political party to endorse discrimination and tell people that how they identify themselves is not real. #onpoli #PCPO2018 #TransAwarenessWeek pic.twitter.com/87renPQvxn

The NDPs are also criticizing the Ford’s Party resoltion.

“People in Ontario, especially young people, should feel safe being who they are – Ontario PC Party advanced a motion that seeks to erase diverse gender identities. This is an attack on LGBT & gender non-binary people,” tweeted the leader of Canada’s NDP Jagmeet Singh.

In Ontario, the NDP said that the Tories are taking a “dangerous position that puts LGBTQ youth at risk” by claiming that gender identity is “unscientific” and “ideology,” and demanding its removal from schools and curriculums.

To say gender identity theory is “unscientific” is 1) incorrect, and 2) irrelevant. Trust me, I’m a trans-care scientist. Trans people exist, their existence does not require scientific validation. Either way, the literature already validates it. @OntarioPCParty #ONpoli #PCPO2018 pic.twitter.com/usG1pf0j5K

“LGBTQ youth are already subject to bullying and stigmatization. They’re already more likely to attempt or to die as a result of suicide,” said NDP MPP Marit Stiles. “Can you imagine how Ontario’s LGBTQ young people feel today, with Mr. Ford’s Conservatives going on the attack against trans kids?”

Stiles added that the Conservatives are debating things that should not be up for debate, and said it wants Ontario “dragged backwards.”

Very disappointed that policy motion R4 on gender identity passed at the @OntarioPCParty convention. We urge the PC Party and the Ontario government to re-consider this policy. #onpoli #pcpo2018

Toronto City Councillor Kristyn Wong-Tam said that if the PC government moves forward with the legislation, bullying and suicides will increase.

“LGBTQ2S kids must be be protected from their transphobia,” she said.

Today Doug Ford's PC party voted to debate in 2019 a legislative priority that includes his govt removing “gender identity theory” from schools. If this happens, bullying and suicides will increase. LGBTQ2S kids must be be protected from their transphobia. #TransAwarenessWeek pic.twitter.com/h1VGjkZhOy

In her statement, Wynne called on Doug Ford to immediately denounce “this dangerous resolution.”