The province has confirmed four new cases of COVID-19 in Ontario, bringing the total to 26.

The Las Vegas related case, which was reported earlier on Friday, is among the four confirmed by the province.

According to Dr. David Williams, Chief Medical Officer of Health, of the 26, four cases in the province are resolved, with each of those patients having two consecutive negative tests at least 24 hours apart.

New cases from a cruise ship

The first two of the four cases is a married man and woman, both in their 60s, were aboard the Grand Princess cruise ship out of San Francisco, California, which travelled to Mexico from February 11 to 21, 2020.

The province said they returned to Canada on February 28.

“Both individuals were assessed at Trillium Health Partners – Mississauga Hospital where all Infection Protection and Control protocols were followed. They are well and currently recovering at home in self-isolation,” said public health officials. 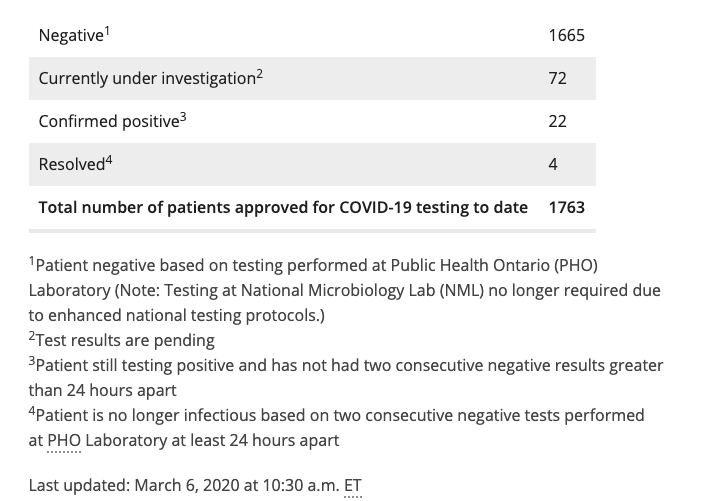 As reported earlier on Friday, one of the cases involved a patient who had travelled to Las Vegas.

The government confirmed the male patient is in his 40s and returned from Las Vegas, Nevada on February 28 and was seen by medical staff at Toronto Western Hospital also in Toronto.

As for the fourth reported case, it is a male in his 50s who returned from Iran on February 27 and presented himself to North York General Hospital’s emergency department in Toronto on March 3.

Both males were assessed and discharged home respectively where they remain in self-isolation with minimal contact with others.

“Both Peel Public Health and Toronto Public Health are continuing to work closely with Public Health Ontario in taking immediate precautions to ensure these patients are being safely and appropriately cared for and that other patients, staff and the community are well protected,” said the province in a release, adding that, at this time, the virus is not circulating locally.

“However, given the global circumstances, Ontario is actively working with city and health partners to plan for the potential of local spread.”

On Thursday, eight new presumptive cases of the virus were confirmed in British Columbia, bringing the total number in the province to 21.

The same day, the first presumptive case of coronavirus was detected in Alberta and Quebec reported its third.