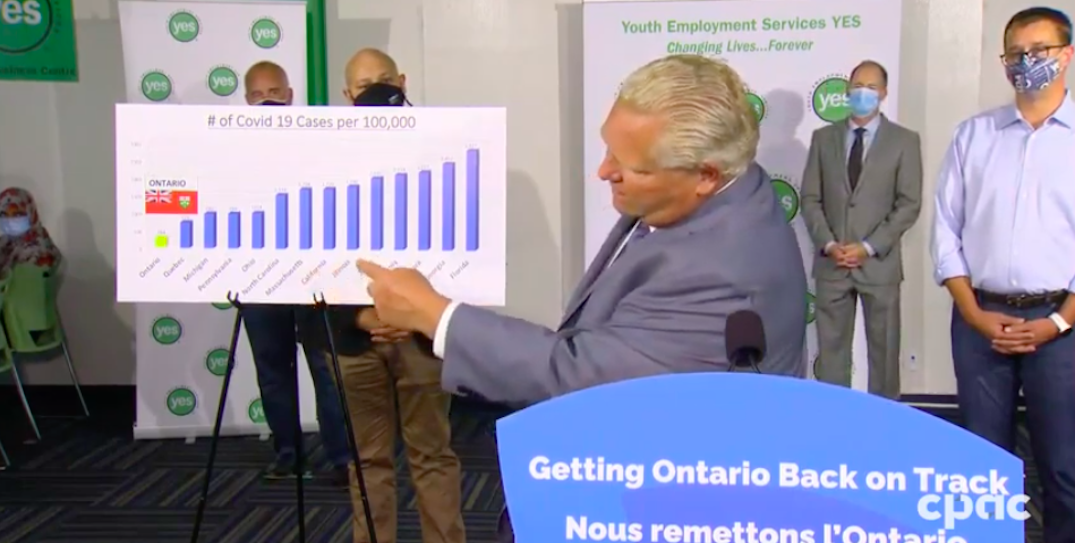 Ontario Premier Doug Ford is pointing to statistics that reveal the province has the fewest COVID-19 cases compared to other major North American jurisdictions.

On Friday, Ford pulled out a chart during his daily press conference, which showed Ontario with the fewest cases per 100,000 people compared to Quebec and other states in America.

“We have the fifth largest population and it’s a large and diverse population,” Ford said. “I wanted to show the people we’re doing a good job, and I encourage people to keep listening to the chief medical officer.”

Ford added that these positive results are what happens when people listen to public health officials adding that “we’re different than the US, Canadians listen a lot more than the Americans do, which will help us with the economy too.”

The premier also said that the high rate of cases in the US is why the border should remain closed between the two countries.

There was also mention of the province’s progress during Stage 3 of reopening, which has officially been open for the past month.

While Ford said the daily numbers fluctuate, sometimes going above 100 or dipping below, there have not been any surges in the province since Stage 3 began, which saw more workplaces and public spaces reopen.

“Everyone is doing a good job and considering the size of Toronto, they’re doing extremely well.”

He added that the four areas to focus on are Toronto, Ottawa, Peel Region, and Windsor-Essex.

However, Ford said that “we can’t take our eye off the ball for a second,” because the virus spreads like an “Australian bushfire.”