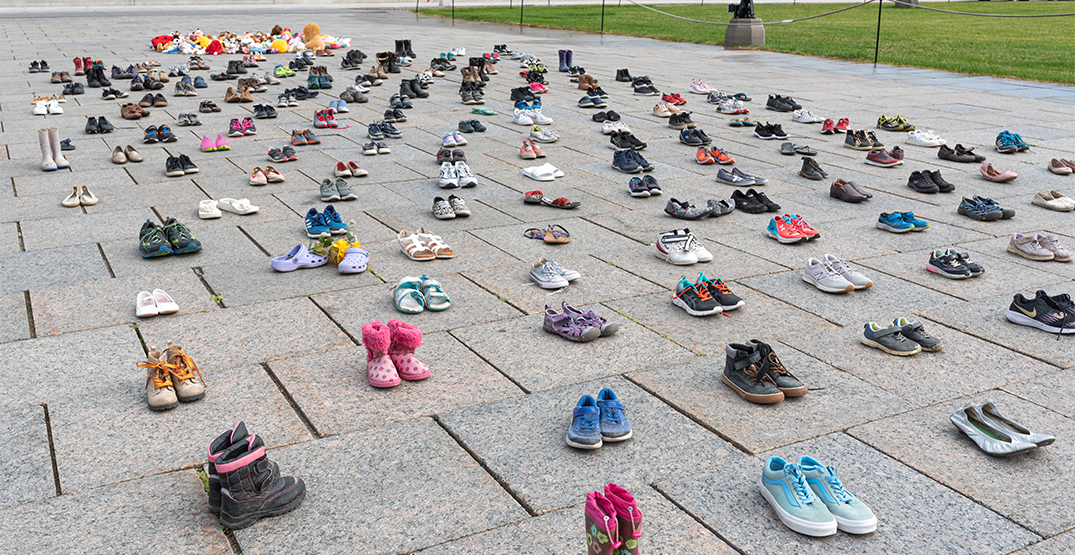 A memorial in Ottawa for the 215 Indigenous children whose remains were found at a mass grave at a Kamloops residential school. (Bing Wen/Shutterstock)

The Ontario government will put $10 million toward discovering and commemorating residential school burial sites after the remains of 215 children were found in an unmarked grave at a former school in Kamloops.

Premier Doug Ford made the announcement alongside Indigenous Affairs Minister Greg Rickford at a news conference Tuesday. The money will be spent over three years.

“Like all Ontarians, I was heartbroken by the news of a burial site containing the remains of 215 Indigenous children at the former Indian Residential School in Kamloops, British Columbia,” Ford said in a news release.

“That is why our government is partnering with Indigenous communities to address the loss of generations who are no longer with us, and the continued loss experienced by residential school survivors and their families.”

Residential schools were a mandatory network of boarding schools for Indigenous children. More than 150,000 children across Canada were taken away from their families and sent to the schools between 1870 and 1996. At the schools, they often faced abuse from the people who ran them.

“We know that the tragic findings at a former Indian Residential School site in British Columbia are sadly not an anomaly,” Rickford said.

“Indigenous leaders and Ontarians are looking to governments to commit to the work of investigating Indigenous Residential School burial sites on a priority basis and our government is taking action to support this process through to completion.”

The project is expected to include Indigenous leaders, archeologists, forensic specialists, and historians. They will work to identify burial sites, investigate them, and commemorate those who died pending the wishes of affected families and communities.

Ogichidaa (Grand Chief) Francis Kavanaugh of the Anishinaabe Nation in Treaty 3 also called on the Pope of the Catholic Church to travel to Canada and officially apologize for the atrocities that occurred within residential schools.

“Perpetrators who are still alive and haven’t been made accountable for what they’ve done,” he said. “For us, it’s genocide. They wanted to wipe us out.”