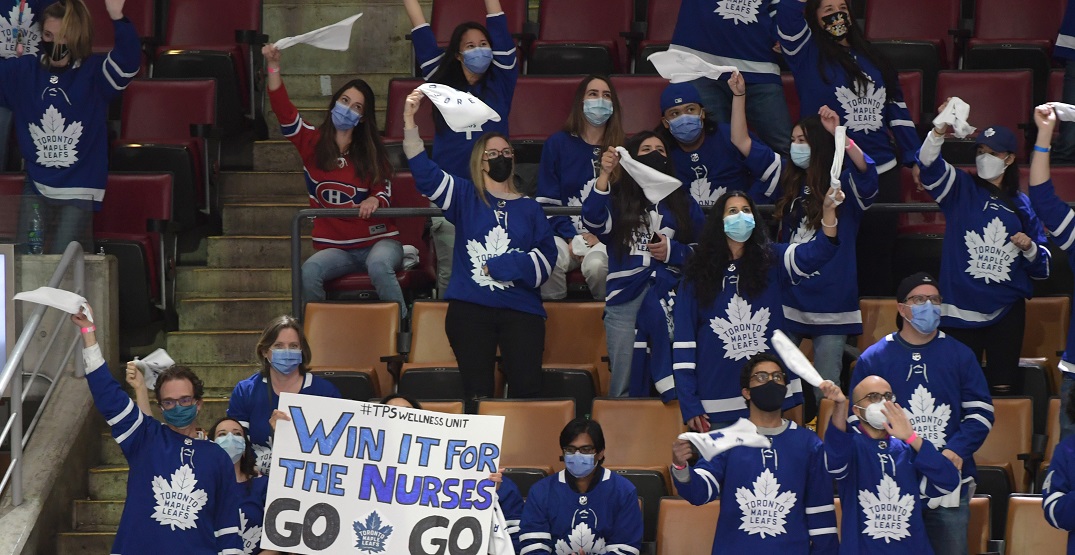 After 550 fully vaccinated healthcare workers were in the stands for the Toronto Maple Leafs-Montreal Canadiens Game 7 on Monday night, some Ontarians were quick to point out that they’re still stuck under various COVID-19 restrictions.

For fully vaccinated citizens, parents of schoolchildren, and small-business owners, many were exasperated that Premier Doug Ford appeared to be concentrating on getting a small number of fans in the crowd for the Leafs’ game instead of focusing on the safety of more essential services.

The decision to allow fans in the stands was only announced Monday morning, less than 12 hours before puck drop. On Sunday, the province rejected a plan to allow 2,500 healthcare and other essential workers in, and it initially appeared that no spectators would be attending.

The Leafs fell 3-1 to the Canadiens, ending their season.

Here’s a roundup of some of the Twitter reactions directed at the provincial government and Ford himself:

I am so insulted as a home spa who’s waited long enough to be allowed one client at a time. Seeing this news this morning made me extra angry at the government. 🤬

Wait…so, @fordnation spent “all weekend with the docs” figuring out if some HCW could attend the Leaf’s game in person, but he can’t give us a decision about schools for a few days? The Leaf’s game was prioritized over the 2 million school children of Ontario. That’s so Ford.

Ford and the MOH determined that it was only safe for 550 people who are fully vaccinated to attend the Leaf game tonight in an arena that holds 20,000. Now they are deciding if 550 Ed workers and students, with maybe one vaccination, can gather in a school that holds 550 people. pic.twitter.com/DLLP1ONNrl

There are 400,000+ small business owners in Ontario. I'm sure many of them are Leaf fans and wish their government supported and prioritized them the same way. #onpoli https://t.co/ni3rQwCLtT

Time to go visit your friends & family.
Now we can have people visit & throw that long overdue dinner party.

The #lockdown is OVER
If the cops try to charge us, the Leafs game is our evidence gathering is ok!#COVID19

Ontario recently released a three-step reopening plan tied to vaccination rates. The province plans to enter Step 1 when 60% of adults have received their first dose of a COVID-19 vaccine.

Ontario is currently aiming for a reopen date of June 14 that will include outdoor dining, limited outdoor gatherings and limited capacity for in-person shopping at non-essential retail stores.

Large indoor gatherings such as sporting events won’t be allowed until Step 3 when 70% to 80% of adults have one dose and 25% are fully vaccinated. At this time, about 62% of adults over the age of 18 have received a first dose.