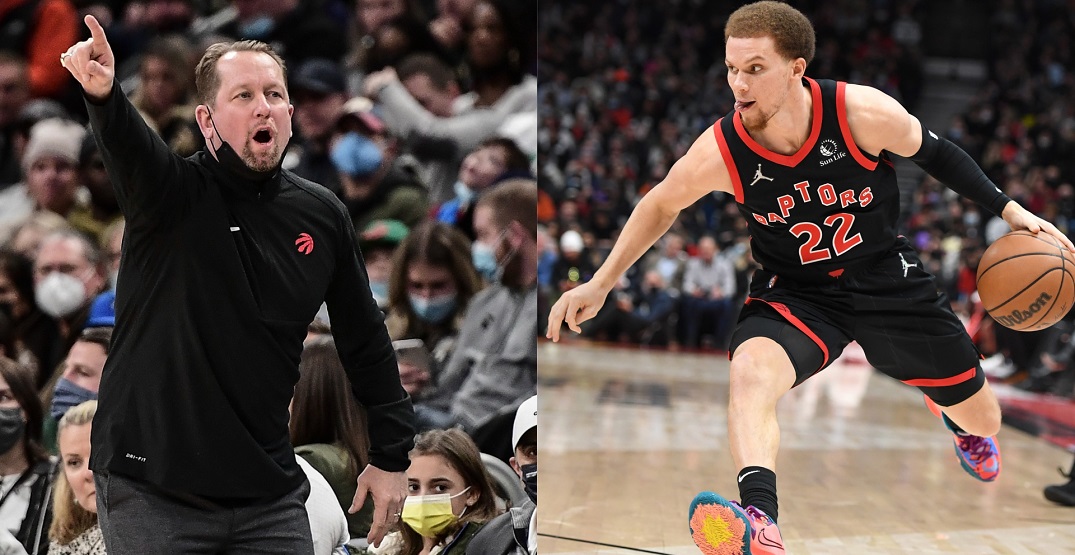 Malachi Flynn hasn’t had the easiest go this season with the Toronto Raptors.

Prior to Tuesday night, Flynn had found himself as one of the odd men out in head coach Nick Nurse’s rotation, having put up just three total minutes of playing time through the Raptors’ last ten games.

But with Fred VanVleet and Scottie Barnes’ unexpected absence announced just prior to tipoff, the door opened up for Flynn to showcase himself in a larger role.

Flynn’s box score: 11 points on 4-7 shooting, three assists, two rebounds and a steal was a solid contribution in 25 minutes of playing time in Toronto’s 125-113 win over Charlotte.

“It’s difficult, but that’s our job,” Flynn said postgame of stepping into his first NBA game with over six minutes of playing time since December 28. “That’s what we get paid to do. So you’ve got to just do it to the best of your ability.”

The Raptors selected Malachi Flynn with their first-round pick in the 2020 draft. A year removed from their first NBA championship, the organization chose the guard from San Diego State — 2019 Finals MVP Kawhi Leonard’s alma mater — at 29th overall.

While late first-round picks are never a guarantee in the NBA, the Raptors’ track record of drafting and developing talent placed high expectations on Flynn to be their latest success story.

In his first year in the league, there was a lot to like about the young Flynn.

Named Eastern Conference rookie of the month last April, Flynn was expected to take a big leap forward this season.

Now in his second year in the NBA, not much from Flynn’s stat line is anything to be impressed by. Flynn’s putting up just 3.1 points per game, 1.0 assists and 1.1 rebounds in his 28 appearances while shooting just 27.7% from three-point range. Essentially, he’s been a non-factor for this Raptors team.

Of course, though, chances to showcase himself have been hard to come by for Flynn, as he’s put up just nine minutes per appearance while falling behind rookie Dalano Banton in the Raptors’ depth chart.

Flynn’s name has been thrown in trade rumours just about all season long, with Sportsnet’s Michael Grange adding this week that he could be an “option” for the Raptors’ to depart with before the February 10 trade deadline.

But if the Raptors do choose to hang on to Flynn, it looks like there’s still a possibility for him to climb his way back into his head coach’s good books.

Flynn made an appearance on Monday night with the Raptors 905 G League roster, his fourth game of the season with Toronto’s affiliate team.

Speaking prior to Tuesday’s matchup against the Charlotte Hornets, Nurse said that Flynn needs to “be a guy that’s disruptive on defence” in order to stick in the rotation and credited his G League stint as a positive for getting Flynn’s season back on track.

Asked Nick Nurse about what his advice for Malachi Flynn is to get back into the #Raptors' rotation:

"He needs to be a guy that's disruptive on defence… he needs to get dirty." pic.twitter.com/5y11ihhWiU

“The role that he needs to play is the same [as he’s been playing in the G League],” Nurse said. “He needs to pick up full court, get on the floor, get dirty, get loose balls, take charges, run the team on offence, make sure to organize from a point guard position, create offence for other players, and make some threes when he gets rhythm chances.”

And it appears that the G League move paid off.

“I mean, they really looked like they had been playing like normally in the rotation,” Nurse said of Flynn and Banton, who was also with Raptors 905. “The trip to Mississauga helped them both just from a confidence standpoint.”

When asked postgame about whether he’d been frustrated with his lack of playing time, Flynn pointed out the team’s recent performances and redirected the question away from himself.

Flynn added that he’s just waiting for his next opportunity to arise.

“[I’m] just staying engaged, staying locked into the games, knowing what schemes we’re in,” Flynn said. “And then outside of practice obviously go hard and practice but outside of that, get my own work [in] and continue to do everything that got me here.”