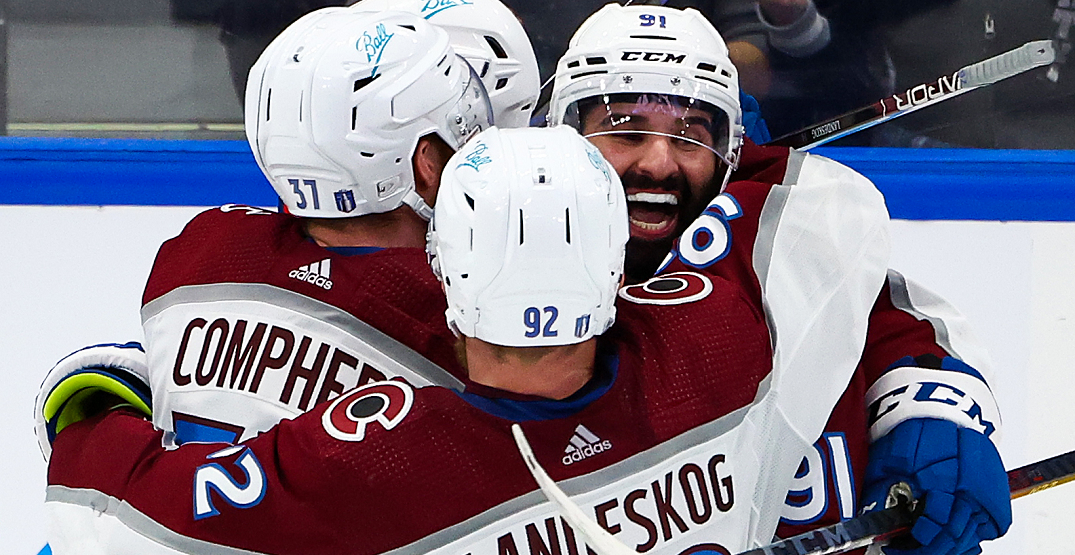 In his life, Colorado Avalanche forward Nazem Kadri has never scored a bigger goal than he did last night.

Coming onto the ice during the overtime period of Game 4, Kadri received a pass near the Tampa Bay Lightning blue line, and found the right spot to slide the puck past goaltender Andrei Vasilevskiy to give his team a 3-1 lead in the Stanley Cup Final.

Prior to last night, Kadri hadn’t played since June 4, suffering a thumb injury that required surgery.

“Sitting here right now, it’s kind of surreal,” Kadri said after the game. “I’m just excited to join the team again and be in the dressing room. This is what I’ve been waiting for my whole life pretty much.”

Waiting for this stage has taken a while for Kadri. He’d fallen in four first round series with the Toronto Maple Leafs after being drafted by the team in 2009, before being shipped off to Colorado in 2019 in a high-profile trade for Alex Kerfoot and Tyson Barrie.

With Colorado, Kadri was bounced in the second round in 2020, before being suspended eight games in the playoffs during the first round last year, the third playoff suspension of Kadri’s career.

Last night was the first Stanley Cup Final game of his career, and it’s hard to say he didn’t make the most of it.

As for the goal itself, there was twofold confusion from the play. First, nobody was really sure the puck was in for a few seconds, with Kadri’s shot getting lodged in the top of the Tampa net.

Kadri explained what he saw from the goal.

“I was trying to go far side. You know I knew I got a pretty good shot off and it might have had a chance,” said Kadri. “I actually thought it was in originally, but then Vasilevskiy kind of fooled me there. I thought it maybe pinned between his arm. He was kind of swimming in the crease and I thought he might have had it.”

Additionally, it looked like Kadri might have entered the ice earlier than allowed while coming on for Nathan MacKinnon. Tampa Bay Lightning coach made an argument in favour of the Avalanche having too many men, but the goal stood.

“It was certainly a few seconds of confusion there and then I just saw everybody bull rush the ice,” Kadri said. “That’s when I knew it was confirmed. It feels nice to get it done.”

Kadri and his Avalanche will have a chance to close out the series tomorrow night, with puck drop set for 8 pm ET.