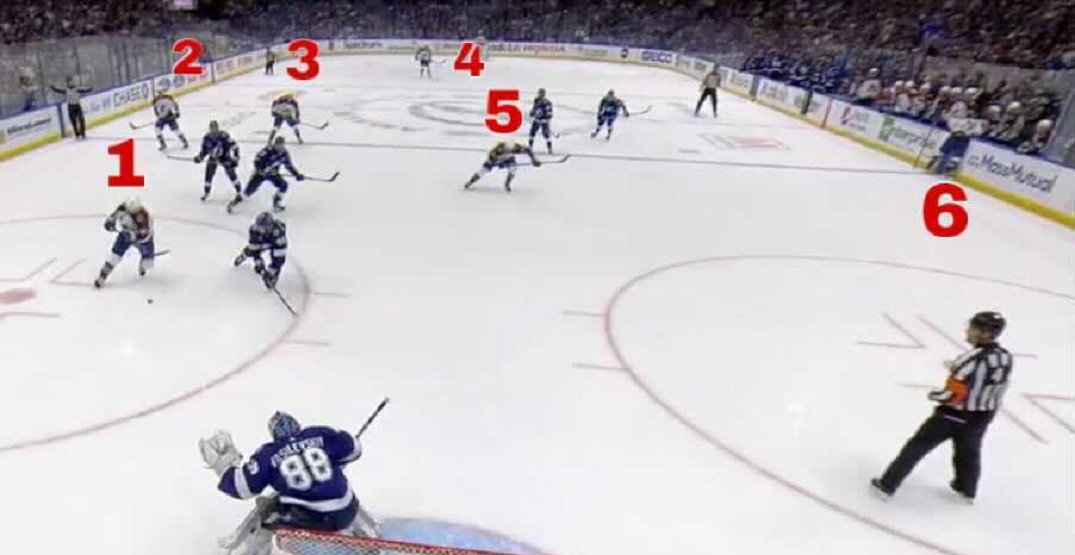 During Game 4 of the Stanley Cup Final last night, Colorado Avalanche forward Nazem Kadri scored an overtime-winning goal that lifted his team a 3-1 lead  in the final NHL series of the year.

Prior to last night, Kadri hadn’t played since June 4 after suffering a thumb injury in Game 3 of the Western Conference Final, and his goal appeared to be a pretty great storybook ending to the night.

Tampa Bay Lightning coach Jon Cooper gave a press conference that barely lasted two minutes, only answering one question before saying he’d speak to the media the next day. Cooper was clearly frustrated about the way the game ended, without diving into specifics.

“You’re gonna see what I mean when you see the winning goal,” Cooper said. “My heart breaks for the players because we probably still should be playing.”

"You’re gonna see what I mean when you see the winning goal. My heart breaks for the players because we probably still should be playing.”

Jon Cooper only took one question post-game, and was clearly not happy about the Avalanche's OT winning goal. pic.twitter.com/g6DAwp475i

Screenshots and alternate camera angles then paraded their way to Twitter timelines and Facebook groups, showing Kadri coming onto the ice well before Nathan MacKinnon (who he changed for) returned to the bench. While the Avalanche looked to have had six skaters on the ice right before the goal, a too many men penalty was not called.

Jon Cooper alluded to "too-many-men" on the ice for the Avs OT winner… thoughts? 🤔 pic.twitter.com/GPDBJCy9kQ

Almost immediately after coming onto the ice, Kadri then received a pass around the blue line before going in to score the goal.

From the NHL rulebook on the too many men penalty:

I’ll end with this. MacKinnon has to be within five feet of the bench BEFORE Kadri steps on the ice, NOT when he enters the zone. That was not the case, as seen here. https://t.co/RbvaactXsz pic.twitter.com/1Zmg1D8NG3

Per ESPN’s Greg Wyshynski, the NHL offered up this explanation for why the Avalanche goal stood:

A too many men on the ice penalty is a judgement call that can be made by any of the four on-ice officials.

This call is not subject to video review either by Hockey Ops or the on-ice officials.

Hate it or love it, it’s not changing now. Controversy or not, the Avalanche take a 3-1 lead in the series, and are one win away from winning the Stanley Cup.