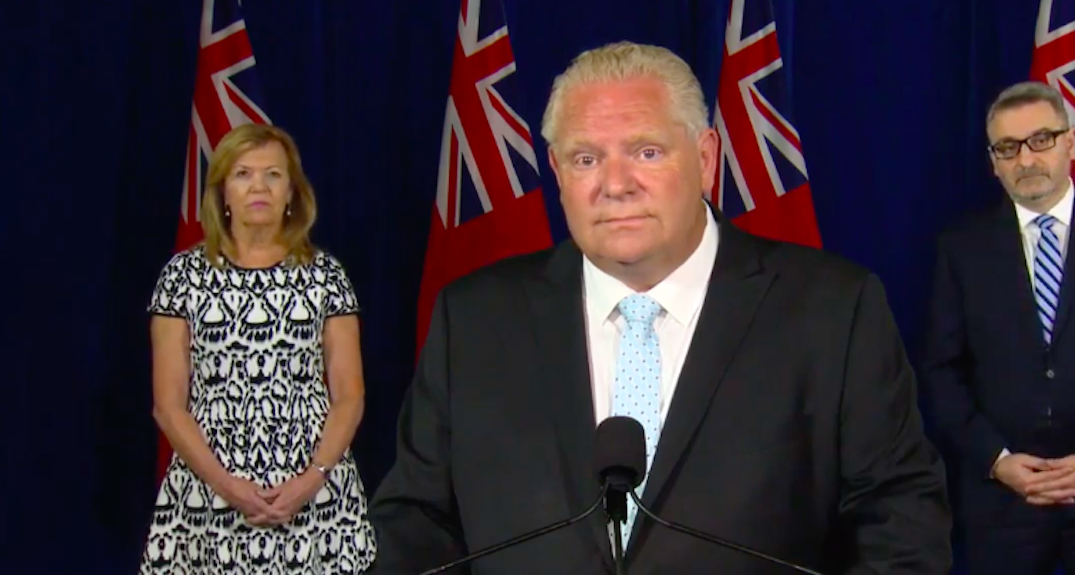 An MPP was removed from the Progressive Conservative caucus after voting against the Ford government’s bill that would allow him to extend some emergency measures for up to a year.

Cambridge MPP Belinda Karahalios voted against Bill 195 on Tuesday, after which she was shown the door by the caucus.

“Belinda Karahalios will no longer be sitting as a member of the Progressive Conservative caucus. Our government’s first priority is the health and safety of all Ontarians, and Bill 195 is an important piece of legislation that protects each and every citizen during the pandemic,” the premier said in a written statement released on Tuesday night.

During a press conference on Wednesday, the premier added that he and Karahalios had a “phenomenal relationship” of which he spent two full days with her last week at work and noted she said nothing about her opposition to the bill to him at the time.

“What’s absolutely critical is to protect the health and well-being of people of Ontario — that’s been fully transparent. Many orders have stopped, but some we need to continue,” Ford said.

Ford added that disagreements within the party can happen, but “when the caucus makes a decision, I go with it.”

Ford said he wishes Karahalios “all the best” but the legislation must come first.

Since reconvening in February, the legislature passed 18 pieces of legislation, including emergency measures to reportedly protect public health and prepare for economic recovery.

The legislature will reconvene by September 14.

“I want to thank the MPPS on all sides of legislature for getting the job done. We had a historic sitting and worked together to protect the public from COVID-19. It was critical to find a way to ensure your government could continue to work for you,” the premier said.

The 18 pieces of legislation include the Reopening Ontario (A Flexible Response to COVID-19) Act, 2020, which will come into force on July 24, giving the Ford government new powers during the pandemic, and the COVID-19 Economic Recovery Act, 2020, which was passed to help create jobs and generate development to build infrastructure projects faster.

The Economic and Fiscal Update Act, 2020 was also passed, providing a $17 billion for frontline healthcare workers, students, families, and seniors.

On Tuesday, the Ontario Council of Hospital Unions organized an in-hospital protest in order to speak out against the extension of the emergency orders in Bill 195, which the union says suspends their collective bargaining agreement.