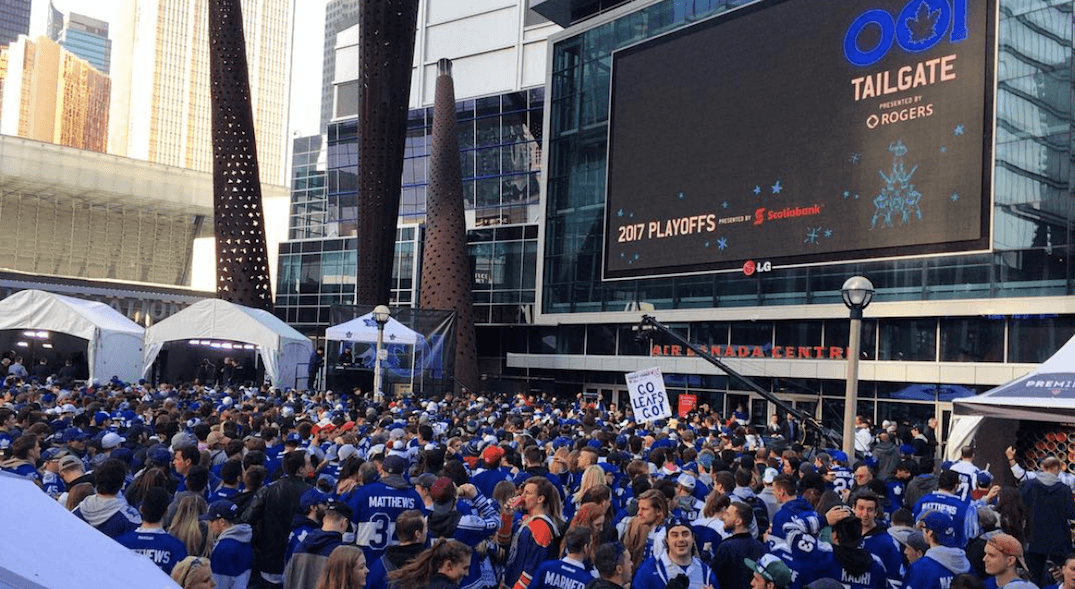 The Toronto Maple Leafs and the Toronto Raptors are back in the playoffs for the second year in a row, and what better way to celebrate than with fans at massive tailgate parties.

This year, the Leafs set a new franchise record for wins in a season (49), home wins in a season (29), and points in a season (105). They also finished third in the NHL’s Atlantic Division. They face the Bruins at Boston’s TD Garden on Thursday, April 12 in Game One of their Eastern Conference Quarter-Final series.

Meanwhile, the Toronto Raptors finish the 2017-18 regular season Wednesday night against the Miami Heat. The Raptors have won a franchise record 59 games this season and clinched first place in the Eastern Conference for the first time in team history.

As everyone starts to celebrate the success of Toronto’s teams this season, the MLSE invite fans to Maple Leaf Square to the Leafs Playoff Tailgate Parties presented by Canadian Tire and Raptors Tailgate presented by Sport Chek to watch the postseason on the big screen.

This year, fans can cheer for their team on the big screen at the square while enjoying giveaways, fun activations, special guests, a live DJ, and more. Gates open two hours in advance of the game.

Inside each Tailgate Party in Maple Leaf Square, Real Sports Bar & Grill will have a beer vendor and Real Sports Apparel will sell exclusive playoff merchandise at a pop-up location. To provide fans, quicker service, these kiosks along with all bars, food trucks, hawkers, and hot dog vendors will be cashless.

Considering how expensive games are, this is the best way to get into the spirit of playoffs at a low cost.

So get ready to party with the best fans in the country.