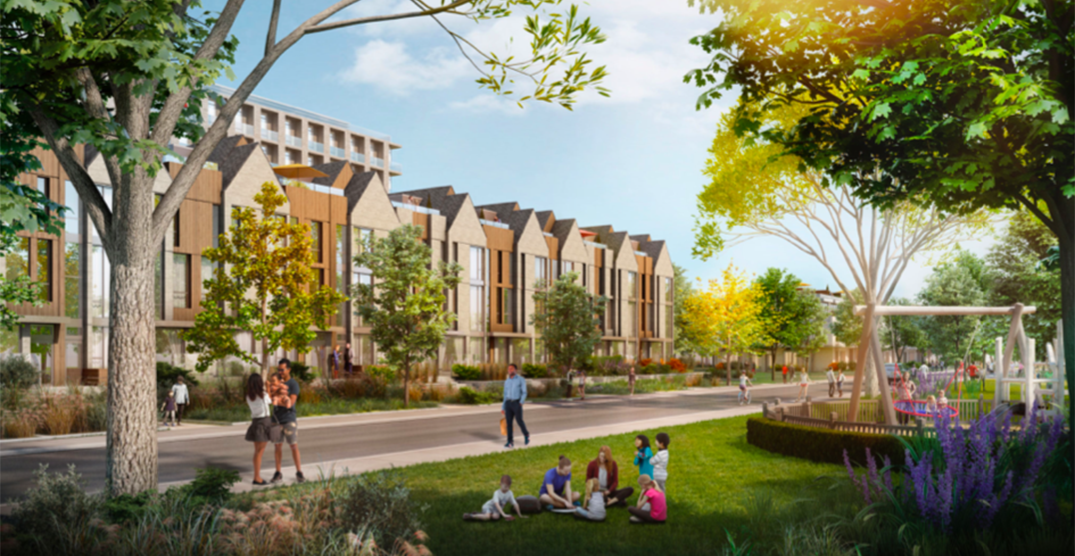 A zoning and proposal application has been submitted to the city seeking to develop a tract of land in Victoria Park into a mixed-use space. The new proposal is an update of a previous plan to build 300 residential units in the same area, swinging the total dwellings up to 798 units.

The new proposal would redevelop the plot into a mix of housing options and unit types and sizes. A total of 798 residential units will be comprised of 102 back-to-back townhouse units and 696 apartment units.

According to the application, approximately 10% of all residential units are in the form of three-bedroom family-oriented dwellings. Of the units, 654 units will be market-priced units and 144 will be affordable homes.

This is a substantial improvement over the previously proposed use for the land. Permitting was approved in 2015/2016 for a project that would have brought less than half the currently proposed total residential units to the space, with only 300 total residential dwellings being part of the originally proposed project.

The affordable housing component of the project represents about 18% of the proposed residential units and 21% of the total residential gross floor area.

“The affordable housing component proposed exceeds the agreement previously approved under the 2015-2016 approval, and significantly increases the provision of affordable housing on the Subject Site,” reads the cover letter submitted along with other documentation by Diamond Kilmer Developments. Habitat for Humanity will also be building 48 of the townhouses.

An additional block of the proposed community will also be dedicated to CreateTO for the development of further affordable housing. The .322 hectare space will support an eight-storey apartment with 96 units of affordable housing.

If approved, besides the homes provided to the area, the current iteration of the project includes 3.481 hectares (8.6 acres) of new public parkland. Two new public roads and five development blocks with a mix of mid-rise apartments and townhouses will be organized around the parks and pedestrian connections.

The proposal also includes what the designers call a “significant parkland dedication,” of 8.6 acres of park. Almost 4.5 acres of which were already designated as parkland under the previous approvals and 4.15 acres of new public parkland.

“The shape and location of the parkland is substantially improved from the previous proposal and allows for improved programming,” reads the document.

The lot will also be designed to house a network of pedestrian paths, pedestrian and bicycle-friendly streets to maximize mobility throughout the site, allowing easy access to transit and amenities.