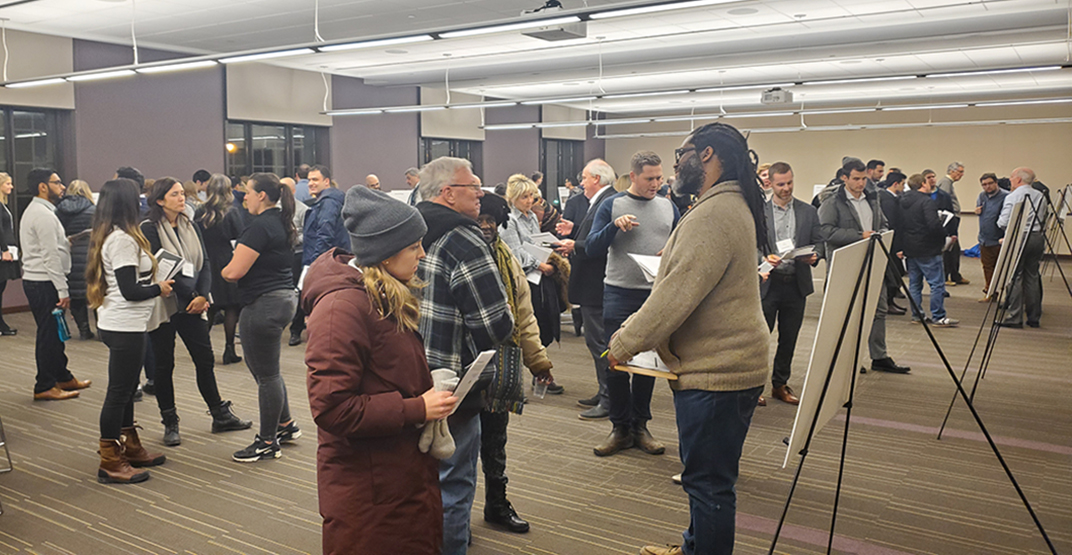 A long conference room on the second floor of one of Exhibition Place’s more nondescript buildings was adorned in placards and packed with Torontonians as Metrolinx employees answered questions about the Ford government’s nascent transit project, the Ontario Line.

Metrolinx wrapped up its scheduled set of four public open houses about the Ontario Line on Wednesday evening.

According to Metrolinx, “the proposed Ontario Line will bring nearly 16 kilometres of much-needed subway service to Toronto to make it faster and easier for hundreds of thousands of people to get where they need to be each day.

The line will stretch across the city, from the Ontario Science Centre in the northeast to Ontario Place in the southwest.”

Currently, the plans for the line include 15 potential stations, including six interchange stations and 17 new connections to GO train lines and existing subway and streetcar lines. 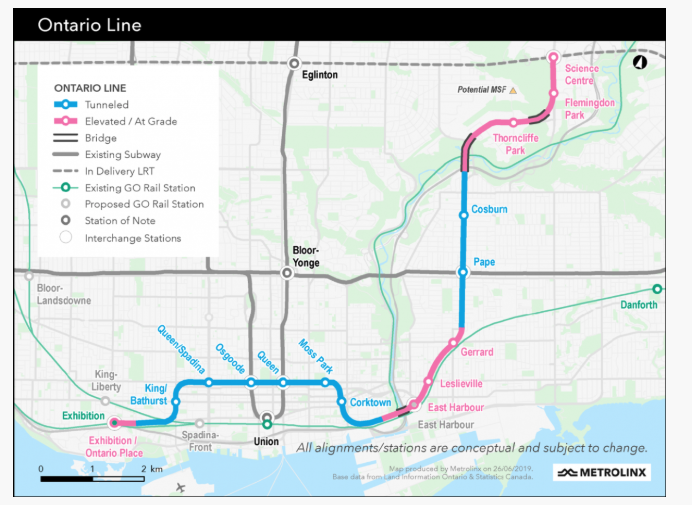 At Wednesday’s event, guests were asked to navigate the room, moving in a circle to read large posters containing information about the various aspects of the project. No formal presentation was offered though there was no shortage of Metrolinx people to speak with.

Sizablely smaller than the proposed business case, the open house offered a brief set of information ranging from the timeline leading up to the creation of the Ontario Line plan — including its predecessor, the since-scrapped Relief Line South project — ideas for technology and infrastructure, and the proposed route.

“We’re having these open houses all across the city in areas where transit will be coming to the community,” said Nitish Bissonauth, a spokesperson for Metrolinx who was at the meeting. “It’s for the city, it’s for the people who live in these communities. The goal is to get a conversation started.”

He also said that the response to the meetings has been larger than expected, with one meeting seeing an estimated over 800 visitors. However, while Metrolinx was adamant about this being a way to get a dialogue started, many attendees were hoping the meeting would provide more answers — including one city councillor.

“For the sixth time in 10 years, we’ve had yet another transit map proposed. Every time a politician announces a new transit map, transit is delayed,” said Spadina-Fort York councillor Joe Cressy.

“What we actually need is transit to just get built.”

Cressy said for his ward and other downtown residents, clarity is needed as to the route of the new line west of Young Street has been changed since the project’s inception in 2019, he’s also concerned about the time the project will take to get built.

“My concern here is that the Waterfront West LRT — long-planned, long-promised, much needed — is going to be further delayed as we endure more technical studies on a new Ontario Line, that I’m skeptical will ever be completed.”

Other attendees echoed Cressy’s concerns, looking for answers to questions about technology and routes that simply are not available so early in the development. Others wondered why there was not a formal presentation accompanying the meetings. (A Metrolinx representative onsite said presentation style meetings had previously been dominated by “strong personalities” in the audience.)

The issue of past projects and Ontario’s construction timeline was of concern to others in attendance as well.

“There’s a tumultuous history there,” Brendan Powell of Toronto told Daily Hive, in relation to the Ontario Line’s cancelled forebearers.

“I’m north of the line but it affects everything around it, I’ll have to take it eventually,” said the 35-year-old.

He cited similar issues to Cressy, wondering about the lack of firm details.

“This so-called plan they’re presenting, it doesn’t say anything concrete.”

Another informational event has been scheduled for February 5, at the East York Open House — Estonian House, at 958 Broadview Avenue.

All of the information available at the meeting is also available on the Metrolinx website.