The Toronto Transit Commission (TTC) is getting a little more tactile, with the addition of Braille route information to ten transit locations in the city.

The new raised tactile and Braille route information signs will appear at 20 individual stops, across ten locations closely spaced out as part of a trial, the TTC says.

“The purpose of these signs is to assist people with low or no vision to locate and wait at the appropriate transit stop in locations where there are two transit stop poles within close proximity of each other (around a bus length apart) along a particular block,” reads a description of the project on the TTC’s website. “The addition of these signs will help to distinguish which routes board at the individual stops, combined with the verification of external stop announcements.”

The information is mounted onto the TTC’s red “infopost” signs, attached to the stop poles that adorn the side of many city streets.

According to the TTC, the signs utilize a combination of tactile numbers and letters, and corresponding “Grade 1 Braille text.”

The upper portion of the panel consists of a tactile outline around a raised module that says the individual route number and the direction of travel. If a stop serves more than one route, there are additional modules. The bottom portion of the panel has information pertaining to the stop number.

According to Braille Literacy Canada, braille is a tactile method of reading and writing for the visually impaired and blind. Named for its creator, Louis Braille, each letter is encoded into a “braille cell” consisting of space for six dots grouped in two vertical columns of three dots each. Unlike American Sign Language, Braille is not its own language, rather a code through which has been adapted to particular languages.

While the transit company tests out the new signs it’s looking for feedback, something the Canadian National Institute for the Blind tweeted out to its followers on Wednesday, along with images of the TTC’s new poles. Those looking to provide feedback should send it to [email protected]

The following stops will participate in the trial. 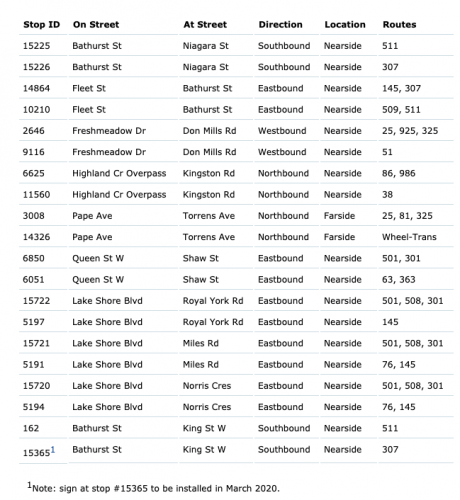