The UP Express has been a convenient transportation option for anyone looking to get to Toronto Pearson Airport from downtown.

From Union Station, the UP Express (aka Union Pearson Express) train takes a traffic-free 25 minutes, and drops passengers off directly into Terminal 1.

But for anyone who’s taken the express train from Dundas West Station, one of UP’s three stops, there’s a short outdoor trek from the TTC subway line to the UP Station. The 3-minute walk can be a hassle for pedestrians, who often have luggage heading to/and from the airport.

It seems, however, that the outdoor walk will soon be over, as Metrolinx plans to connect the two stations through an underground tunnel.

“We are finally moving forward with the connection,” said Metrolinx spokesperson Anne Marie Aikins. “Negotiations were complex with multiple stakeholders, so took much longer than we hoped but we’re excited to finally move forward.” 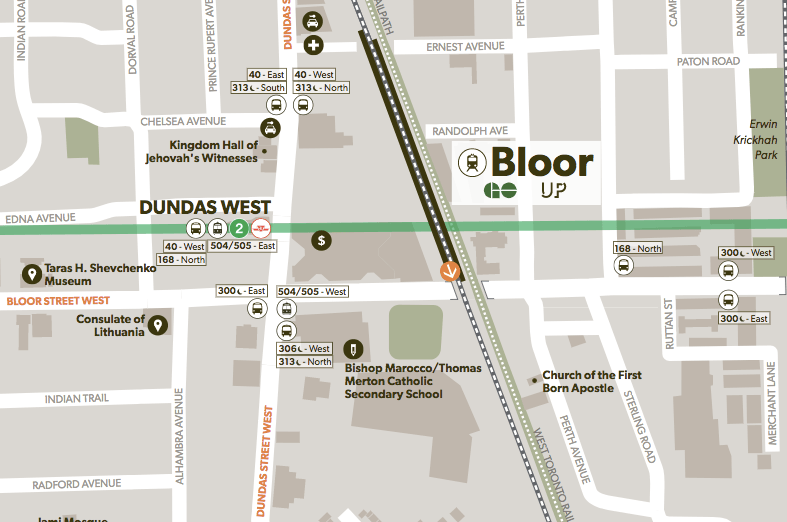 Metrolinx has been negotiating with the property owners on the Crossways property at 2340 Dundas Street West, as the transit company needs access to some of the underground parking lot to make the connection between GO/UP Station and TTC’s Dundas West Station.

A portion of the Crossways, which is a residential and commercial complex, is included in Metrolinx’s preliminary design to build the connection. This preferred route was selected to minimize the impact to the Crossways while delivering a connection suitable to Metrolinx and the TTC, according to Aikins.

“Expropriation is moving forward but does not require any of the residents to move out of their units and is not expected to have any impact on residents living in the Crossways,” she said.

Once the property has been acquired, the design will go through public consultation. At this time, there is no estimated opening date, but early estimates for the cost of the property, design and construction of the connection are at $23 million.

Aikins said that Metrolinx would like to have control of the property by summer 2018.

“We know that seamless convenient connections between GO, UP & TTC are really important to customers,” she said.

According to Metrolinx, the UP Express continues to see and increase in ridership, which is now over 300,000 per month, with 75% of its passengers going to the airport and the remainder commuters or people going to events.