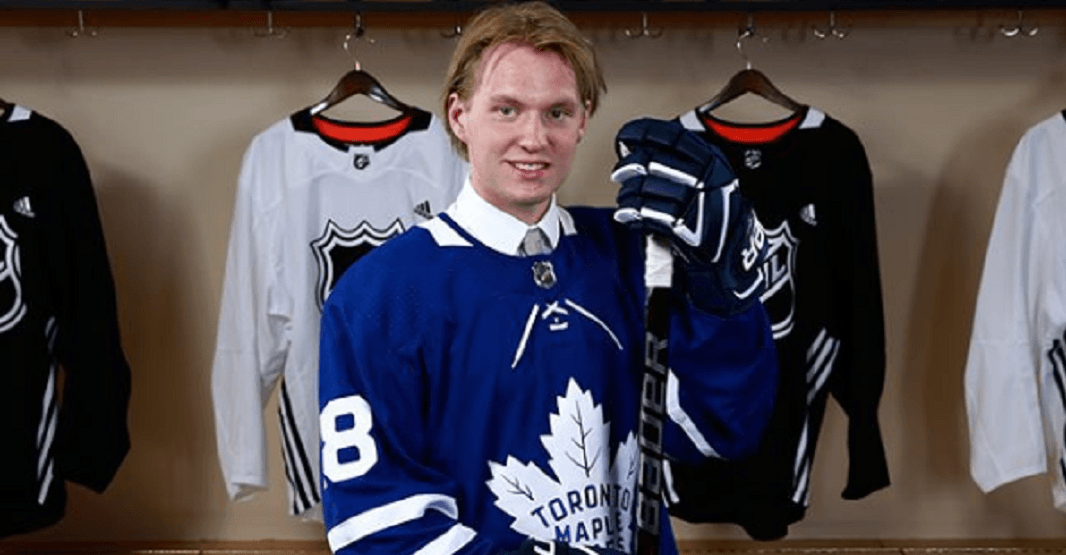 For the second year in a row, the Toronto Maple Leafs have used their first round pick on a Swedish defenceman.

When you get your first @MapleLeafs jersey. #NHLDraft pic.twitter.com/MuhjfHf5qc

This year it’s Rasmus Sandin, a 5-foot-11, 185-pound left shot defender who put up good numbers in the OHL this past year.

Sandin played five games in the Swedish Hockey League to start the 2017-18 season before getting loaned to Sault Ste. Marie Greyhounds for the remainder of the year.

The Maple Leafs – under new GM Kyle Dubas – traded down four spots in the first round of the draft, picking up an additional third round pick (used to select Semyon Der-Arguchintsev) in the process.

Sandin projects as a top-four NHL defenceman who can perform on both ends of the ice. Offensively, he has a high IQ and a quick shot that allows him to get pucks through screens to the net. He’s no slouch defensively either. Sandin has great positioning and despite being somewhat on the smaller side (5’11, 185 pounds) isn’t afraid to throw his body around.

Sandin adds to a Maple Leafs blueline prospect pool that seems to get deeper every year. He joins the likes of Timothy Liljegren, Travis Dermott, and Andrew Neilsen on Toronto’s backend.

Currently under contract for Rogle of the SHL, Sandin has plenty of options for next season. He could remain with the OHL Greyhounds, but it’s more likely he goes pro and plays either with Rogle in Sweden or in the AHL with the Toronto Marlies.

“Transition defender who offers strong vision and crisp passes. A smart player who knows when to pinch and can read the play happening at both ends of the rink. Lacks elite quickness but has a knack for changing gears to create separation while on the attack.”