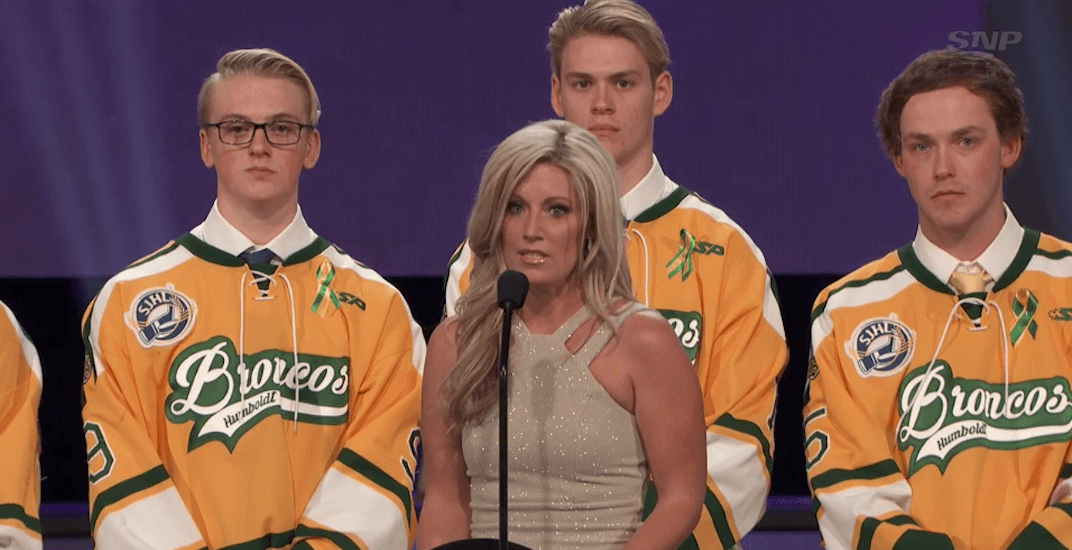 It was an emotional night at the NHL Awards in Las Vegas Wednesday night, unlike any other we’ve seen before.

In a year where a number of tragedies hit close to home for the hockey community, the NHL honoured the victims and first responders of the Vegas shooting, and had players from the Stoneman Douglas High School in Parkland, Florida, as well as members of the Humboldt Broncos, in attendance.

The Broncos’ late coach, Darcy Haugan, was the inaugural recipient of the Willie O’Ree Community Hero Award, presented to “an individual who – through the game of hockey – has positively impacted his or her community, culture, or society.”

Haugan, who was among the 16 people that died tragically in the Humboldt Broncos bus crash last April, was an obvious choice as he clearly left a lasting impact on everyone that knew him.

Accepting the award on behalf of Haugan was his widow Christina, who delivered a powerful and emotional, yet composed, speech.

Beautiful speech from the wife of late coach Darcy Haugan and a fitting tribute to the Humboldt Broncos at the NHL Awards pic.twitter.com/BV6qxxJg65

“I’m honoured to accept this award on behalf of Darcy, but not because of what happened to him on April 6, 2018, but because what he did every day before April 6th,” said Christina, with 10 of the surviving Broncos players looking on.

Christina referenced the core covenant that Darcy had painted on the wall outside of the Broncos dressing room, which gives us insight into what kind of man he was.

“[The core covenant] does not mention wins or championships, because Darcy’s purpose as a coach was to impact lives and develop strong character. His legacy is far more than what is recorded on the stats sheets, it is measured by the lives and communities that were better off for having Darcy in them.”

"Family first and then hockey second."

Darcy Haugan used his role as @HumboldtBroncos head coach to help his players realize the power of hockey and community. #NHLAwards https://t.co/9rZHAa1dRo pic.twitter.com/imPmZPwbOP

As part of the award, the National Hockey League Foundation will donate $10,000 to a charity that was important to Darcy, the Saskatchewan Brain Injury Association.