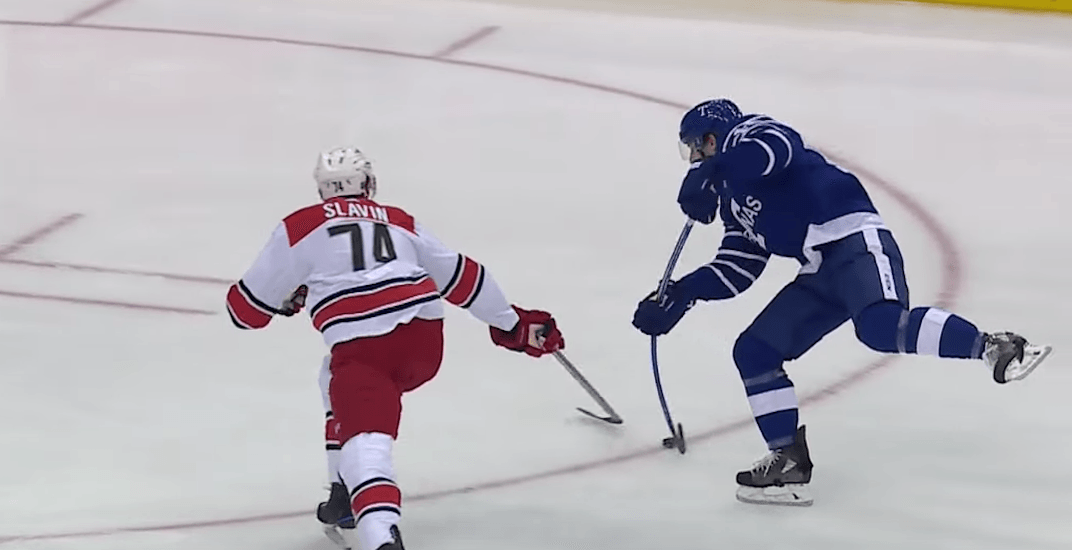 Mitch Marner’s got to be feeling pretty pleased with his game these days.

After a trying start this season that included a stretch with just two points in 10 games, a pair of performances on back-to-back days has seemingly seen Marner look once again like one of the NHL’s premier wingers.

The second-year forward had a career-high four points on Tuesday afternoon in an 8-1 victory over the Carolina Hurricanes. With assists on goals by James van Riemsdyk, Patrick Marleau, and Tyler Bozak, Marner’s passing game by itself was enough to crack the highlight reel.

But it was this slick effort on the power play to put the Leafs up 2-0 that was the standout moment of the day for the 20-year old.

Instead of setting up in the traditional power play cycle, the usual-pass first Marner surprised everyone when he simply skated into the offensive zone, took a few strides, and clanged in a wrist shot off the post past Hurricanes goaltender Scott Darling.

The goal was just his third of the season, and first since November 11.

In the third period on Wednesday night against the Columbus Blue Jackets, he did… pretty much the exact same thing as the day before.

In this case, it was Blue Jackets goaltender Joonas Korpisalo falling victim.

While the Leafs didn’t pick up the victory in this one, falling 4-2 to Columbus, it was the first time he’d scored goals in back-to-back games since March.

In both goals, we see a few similarities. Both instances see Marner picking up speed in the neutral zone after a light pass from a teammate, and see him enter the offensive zone by splitting a pair of opponents.

Most importantly, though, is the finish.

Shooting from the right-wing faceoff circle, Marner picks the far corner on both Darling and Korpisalo. On each shot, he managed to create the unmistakable *ping* as the puck clangs off the post and in.

It’s clear, too, just how much he’s enjoying playing in the NHL these days. A product of various Toronto minor hockey teams, Marner’s joyous facial expressions seem to say, “did I just do that?”

For a player who had been pushed up and down the lineup earlier in the season, it’s great to see him string together a pair of dominant performances and highlight reel goals on back-to-back nights.

The fourth overall pick by the Leafs in 2015, Marner scored 19 goals in his rookie season with the Leafs last year, while finishing fifth in voting for the NHL’s Calder Memorial Trophy as the league’s best rookie.