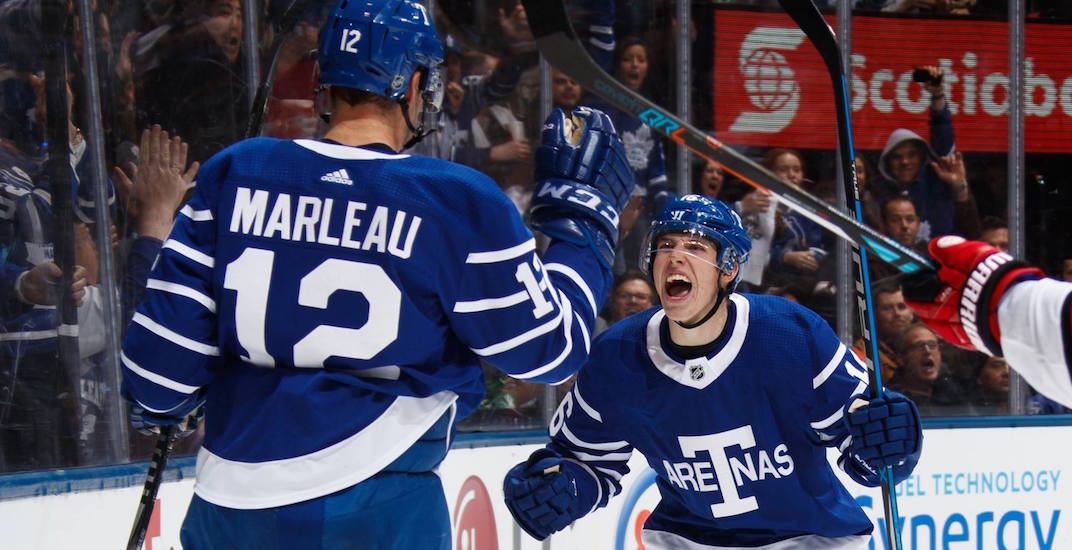 The Toronto Maple Leafs (21-10-3) are second in the Atlantic Division with 43 points, and sparks of bromance are flying up and down Toronto’s lineup.

For those who don’t know, the bromance is an emotionally intense, platonic bond between two men, and these bonds are only getting stronger for the blue and white.

Listed below are Toronto’s best bromances of 2017.

When the Leafs signed Patrick Marleau this offseason, he was expected to play on Auston Matthews’ left wing.

To date this hasn’t happened, but the 38-year-old Marleau has filled a different need for Toronto’s young superstar.

The two play Old Maid and watch questionable movies on the road (Cars 3?) and the chemistry shows on the ice.

Marleau may have been drafted before Matthews was born, but the two prove age is only a number.

An honourable mention in this bromance goes to Mitch Marner:

Patrick and his boys after dinner, before the epic mini stick battle. Ha ha for helping with our elf on a shelf @Marner93 @AM34 pic.twitter.com/SYA7n9tw8w

When Marner was ‘demoted’ to the fourth line, Martin was right there to provide a necessary boost.

But even after putting on a four-point clinic, Marner still managed to get chirped by his teammates given Tuesday’s 2 pm start.

Even so, it’s always nice when the former NHL hits leader has your back.

Out on the ice Leo Komarov and Nazem Kadri play a gritty game, and the two are known to chirp each other a lot.

Last month, in fact, head coach Mike Babcock had to stop practice to settle an ongoing debate (i.e. who is the faster skater). Komarov won, but Kadri says it would have been different if he had a puck on his stick.

And even in games, Babcock often plays the calm Marleau alongside Toronto’s most rowdy. What would they do without him?

Kadri warned Marleau about how he & Komarov have intense discussions on the bench in-games; Nazem says Patrick will be “mediator” on line

Still, the two really are best friends despite the chirping and other contests in question.

Nothing like some internal competition to keep you on your game.

Two elite European talents, Kasperi Kapanen and William Nylander have been close for a while.

Each is a 2014 first rounder, and the two spent time on the Toronto Marlies together before making the jump to the big club.

This is a video of Kapanen interviewing Nylander at the very start of their professional careers (spoiler alert, there are more incoming chirps).

But if there’s one thing Kapanen can’t chirp his friend about, it’s that incredible Swedish hair on full display whenever Nylander nets one for the highlight reel.

William Nylander snaps one top shelf to extend the #Leafs lead to 7-1. 5:55 to go in the third. pic.twitter.com/U3mq7xGbPr

Safe to say their bromance is real, as evidenced by this Valentine’s Day shoutout.

How special is that?

On such a young team, it’s only natural two of the top veterans form a unique bond. James van Riemsdyk and Tyler Bozak are playing their sixth season together with the Leafs, so it’s understandable Babcock has kept them on the same line.

Toronto tends to win hockey games when this line clicks, and there have been lots of reasons to celebrate both on and off the ice this season.

Both are on expiring contracts, so it will be interesting to see how management handles this situation leading up to the February 26 trade deadline. Toronto would certainly miss those Bozie/JVR tap-ins.

But if they really have to be traded, general manager Lou Lamoriello and company should try and deal them to the same team. Considering they swapped birthday posts, how could you possibly break up a bromance like that?

Lou Lamoriello doesn’t worry about the future, and he doesn’t show much emotion in the present moment, either.

He lurks in the press box, makes one loophole deal after another (i.e. “loophole Lou”) and everyone is usually left dumbfounded.

But while Lamoriello loves his team, he isn’t distracted by bromance. He’s all business, and we need to let him lurk in the shadows (in Lou we trust).

This has to be one of the most iconic bromances in the NHL. Mike Babcock is a leader who strives for excellence every day, and his players, opponents, and fans all respect him for it.

After all, did you know they sell “Babsocks?” They’re a real thing, and if you pull them up high enough, owners say he might actually crack a smile.

Every time I cross paths with the @Babsocks gang (they’ve got a sweet booth going at Nathan Phillips Square this month) they get a little closer to monopolizing my sock drawer. Nice to finally have the full set! pic.twitter.com/V37m02uiMr

He’s also very animated behind the bench, which is amazing because Toronto has waited too long for a coach who knows this team can win.

How could you not love a coach who loves this city and his team?