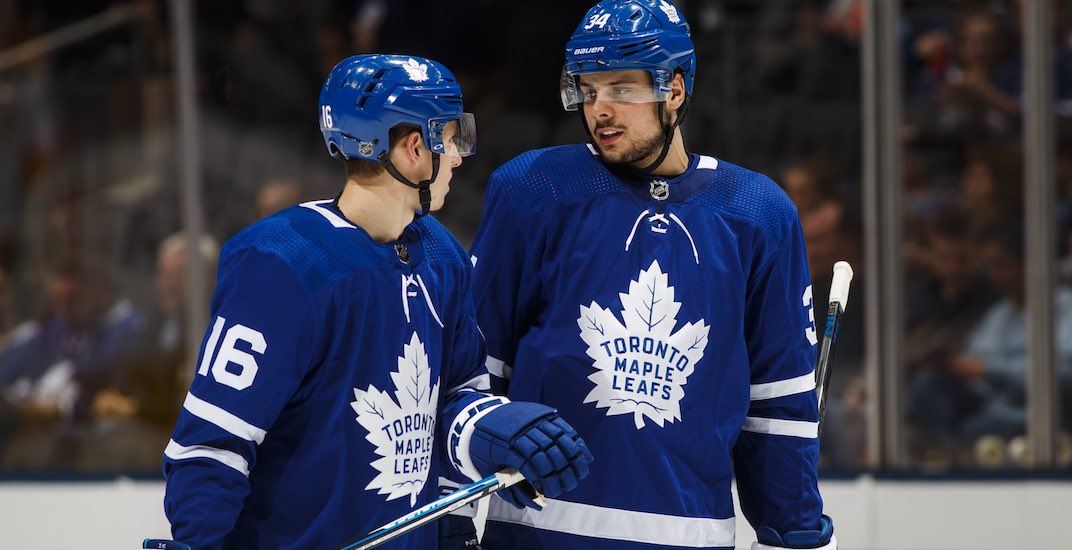 With the Toronto Maple Leafs set to begin their season next week, it seemed the time was nigh that the team was about to name a captain – their first since Dion Phaneuf’s departure in 2016. As Phaneuf’s tenure in Toronto was memorable for being one of failure and disappointment, it’s been a challenge for the Leafs to make sure they make the right choice when they finally do select the next player to wear the C.

Each has their own merits: Rielly has been with the organization since 2012 and is coming off a breakout season. Tavares has been an NHL captain before (in New York, for five seasons), and Matthews had achieved superstar status in his first three years in the league.

But on Tuesday afternoon, news broke that Matthews was facing disorderly charges in his home state of Arizona for an incident taking place around 2 am back on May 26. A pre-trial hearing is taking place on Wednesday, though Matthews will not be in attendance.

Today, Matthews gave a rather textbook answer to the media:

“I regret any of my actions that would ever put a distraction on the team or distress on any individual,” Matthews said. “I take a lot of pride in preparing myself for the season and representing the Toronto Maple Leafs as well as I can. Unfortunately, due to the situation, I’m afraid I can’t make any other comments.

While a 21-year old out drinking with their friends is not a news story, Matthews’ alleged actions clearly cross a line of right and wrong. And a group of men attempting to enter anyone’s car — let alone a woman by herself — shows a clear lack of respect and personal space.

It shouldn’t be simply laughed off as a harmless prank, regardless of what Matthews’ intentions may have been. From what’s being alleged, it appears a person was put in severe discomfort and fear for their own safety.

However, it’s tough to tell what the legal consequences of the situation will be.

Jail time doesn’t seem likely or fitting for this case, but it’s anyone’s guess what the actual final decision of the court proceedings will be. A plea bargain? Community service? A fine that does little to nothing to a player who just last season signed a shiny $58 million contract? In any case, it’s hard to see any punishment for Matthews that tangibly impacts his life negatively. Probation clauses could theoretically limit some of Matthews’ freedom while in his home state, but again, it’s hard to tell how the case will be handled.

Just as the actual legal outcomes are murky at this point, Matthews’ role on the team moving forward may also see a shift.  It’s unlikely the team or league comes up with a suspension, and he’ll still be relied upon as the team’s top goal scoring option.

But if the Leafs were in fact planning on handing Matthews the captaincy before the season starts, their next step is a tight one to be making.

The optics of potentially naming Matthews captain before the season — less than a week after news of the charges arose — don’t seem great. Any press conference would likely be overrun with questions about the case, which would be an unwanted start to the era of him leading the team.

It would also show the Leafs’ management giving Matthews essentially a free pass, and proactively choosing a face of the franchise and team leader that’s allegedly demonstrated high levels of immaturity and disrespect to members of the public just four months ago.

If the team’s leadership group hands the captaincy off to Rielly or Tavares, and pretends that was their plan all along, it could be seen as disingenuous. At the same time, either of these potential press conferences would likely also be filled with questions about Matthews, and whether or not the court case had anything to do with the team’s decision.

The Leafs could also captainless another season, and give vague answers about how “their vision has changed,” but that seems like a great way to begin to alienate a fanbase from their management.

At the end of the day, a letter on a jersey doesn’t dictate hockey talent, leadership ability or character.

But at the very least, the Leafs went from a situation of having three strong candidates for captain where it’d be hard to make a wrong choice, to moving into a position where it’s tough to make a right one.