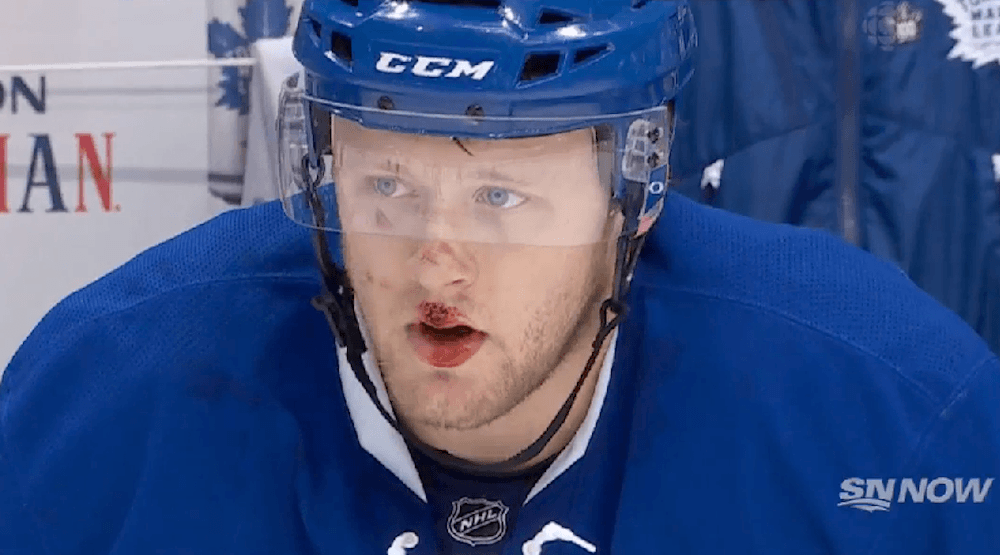 If you asked Maple Leafs head coach Mike Babcock before the series began if they’d be happy with a 2-2 series heading back to Washington, the answer would be an emphatic “yes.”

But yet, there’s a feeling of missed opportunity for the Leafs, who started poorly on Wednesday and were never able to fully recover. Washington canceled another overtime game (as is customary in this series) by beating Toronto 5-4 in regulation of Game 4.

This game was essentially a carbon copy of Game 3 two nights earlier, with the Capitals grabbing an early 2-0 lead, only to have Toronto answer back quickly.

Less than three minutes into the game, an on-purpose missed point shot by Nate Schmidt found Nicklas Backstrom, who made a nice play in front to TJ Oshie who buried it. No chance for Frederik Andersen and the crowd was silenced.

Just 4:34 in, Alex Ovechkin made it 2-0, with a classic Ovie snipe from his favourite spot on the power play. Easy as that, it was 2-0 Capitals.

But 42 seconds later, the Leafs responded. William Nylander made a nifty on the boards before sending the puck back to Jake Gardiner who sent a shot towards the net that banked off Zach Hyman and in the net.

Despite being outshot 9-2, the Leafs cut the lead in half.

Unlike Game 3, the Capitals were able to extend their lead before the end of the period.

Tom Wilson saved a potential goal at one end, then provided a screen at the other on Lars Eller’s goal with 6:19 left in the period.

Just 1:23 later, the Caps struck again. With Morgan Rielly hurt on the ice and out of the play, Wilson scored to make the score 4-1, converting on a pass on a 2-on-1 from Andre Burakovsky.

Washington looked like Presidents’ Trophy winners in the first 20 minutes, dominating the Leafs, and holding a 15-6 advantage in shots.

The play was a lot more even in the second period, with the shots tied at nine apiece in the middle stanza.

After a good hard working shift by Connor Brown drew a penalty, James van Riemsdyk made the Caps pay on the power play.

The Leafs were fortunate on this one, getting a favourable bounce off Dmitry Orlov to help the cause. Once again, Toronto had life, down by just two goals.

With under seven seconds left in the second period, a pair of unforced errors by the Caps.

Eller played the puck with his hand off a faceoff to draw one penalty, and three seconds later Orpik broke Mitch Marner’s stick in half.

The Leafs had 1:54 of 5-on-3 power play time to work with, but they couldn’t do anything with it.

Auston Matthews looked like he was going to rev up the Leafs comeback machine, scoring his second goal of the playoffs, to pull Toronto to within one.

But it was not to be. Shortly after, TJ Oshie restored the two-goal lead after a comedy of errors by the Leafs which included Connor Carrick bringing the puck into his own zone to help the Caps out.

The Leafs scored a late goal, with Tyler Bozak potting home a goal with 25.8 seconds left.

But it was too little, too late.